Data reveals where in the UK you’re most likely to be caught speeding, with demand for speed awareness courses rising as the cameras catch people out.

There’s nothing that fills British drivers’ hearts with fear quite like the flash of a speed camera. Was it the sun in your rearview mirror? Or were you doing over the speed limit, and you’ve just been caught?

Whether it’s reckless driving on the motorways or slipping up to 40 in a 30 zone, speed cameras are there to keep our roads safe, and we’ve found out where they’re working hardest of all.

Our data shows you which roads you’re most likely to be caught speeding on, as well as the average fines we face nationally each year and how much that costs us.

Speeding fines are going down year on year

Despite how it might feel if one arrives at your door, the amount we’re being fined for speeding is actually going down. Following tougher restrictions around speeding being implemented in April 2017, we submitted a Freedom of Information (FOI) request[1] to police constabularies around the country to find out which areas were the worst for speeding. Using an average increase percentage we then predicted how much money Brits are going to be spending on fines and how many fines are likely to be issued in the next five years. 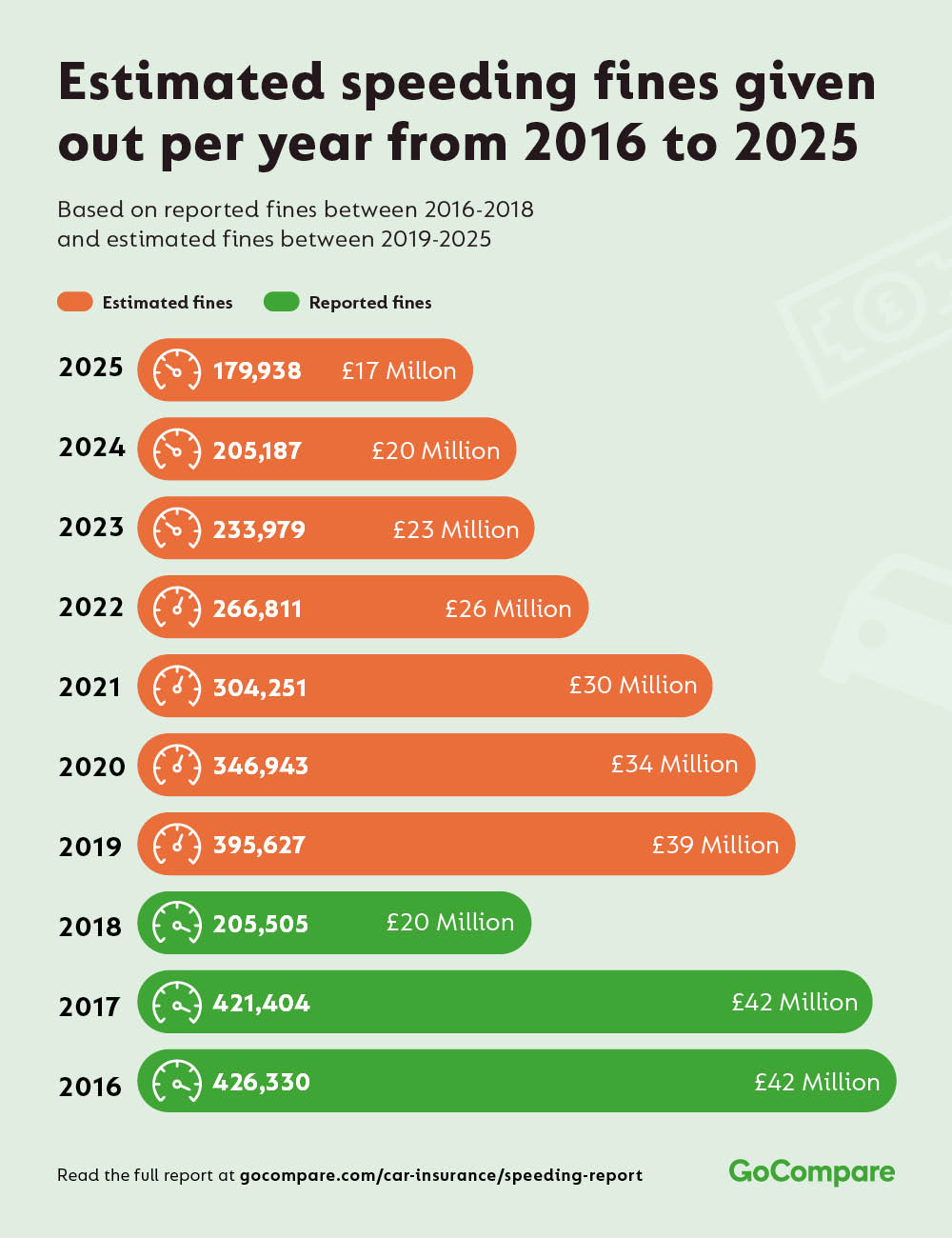 The only year to have bucked that trend is 2018. Speeding fines plummeted that year, with us only paying a reported total of £20.5 million according to the police FOI - less than half of what we’d paid two years earlier.

Our data suggests that if this trend continues, in five years time we could be paying as little as £17.9 million as a nation. As driver awareness of speed cameras increases, and more smart motorways are implemented throughout the UK, the risk of being caught speeding appears to be too great for many drivers to chance it. 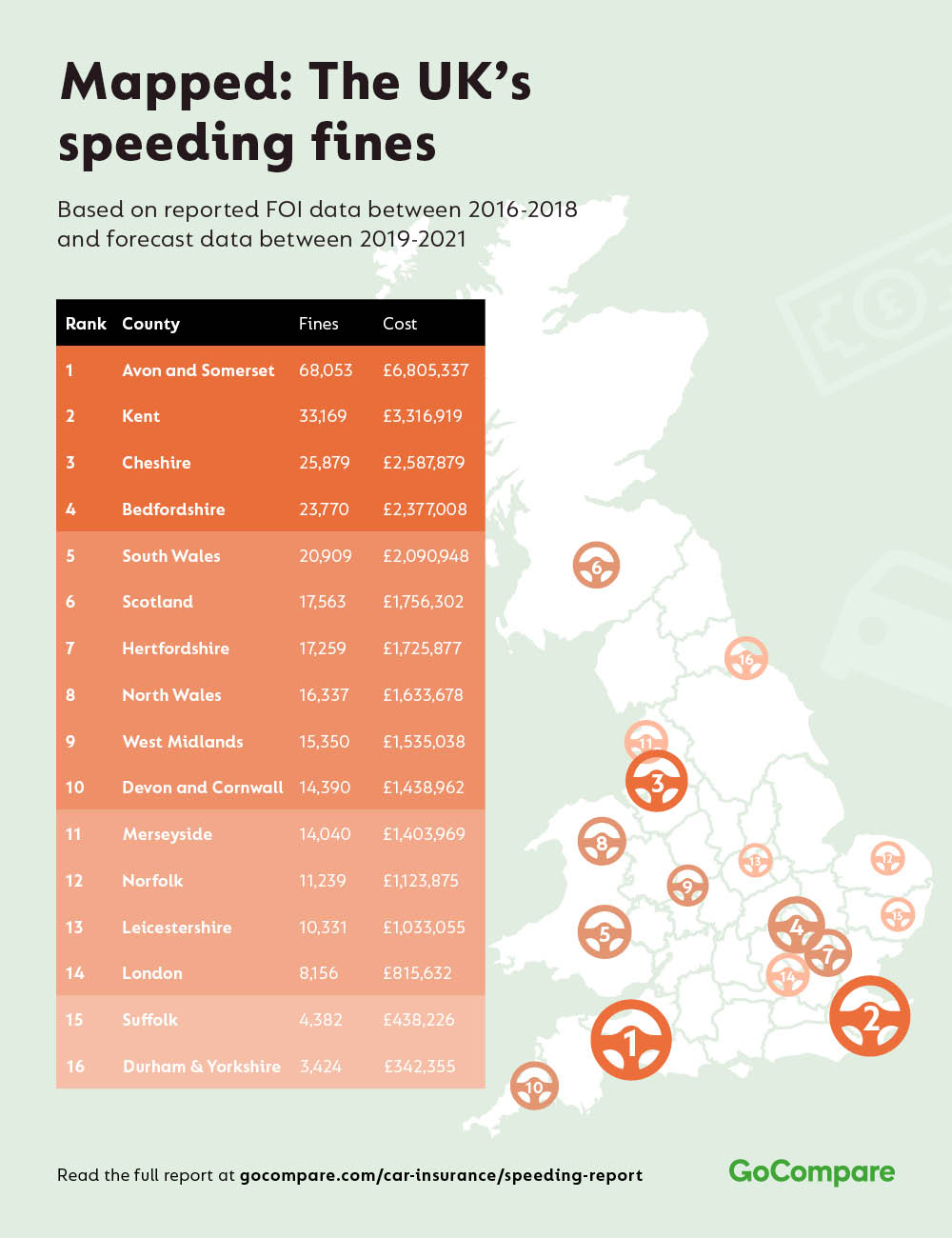 In the sleepy countryside county of Avon and Somerset, drivers are exceeding the speed limit more than anywhere else in the UK. Drivers here are predicted to rack up £6.8 million in speeding fines, more than Kent (£3.3m) and Cheshire (£2.5) combined.

The riskiest roads in the county look set to be the M32, where £1.5 million in fines are predicted to be handed out, followed by the M5 southbound between junction 16 and 17. That road could see £1.12 million in fines sent out, with the long, straight stretches proving too tempting for some.

Almost half of drivers speed on UK motorways

The national speed limit is 70mph on motorways, unless stated otherwise. However, for almost half of drivers that number is more of a challenge than a rule. We analysed the Department of Transport’s speed statistics to find out how many drivers were reported to have been speeding on the UK’s roads. [2]

Between January 2019 and September 2020, 48% of motorway drivers were seen to be speeding, putting the other half of road users at risk.

Things didn’t look much better on slower routes. On the roads restricted to 30mph, 55% of drivers sped, providing dangerous settings for the walkers, runners and residents who lived nearby.

The only roads to get a good speed report for that period were single carriageways, limited to 60mph. On these stretches, only 10% of drivers were found to be speeding, as difficulties in overtaking prevented anyone from going faster than the car in front of them.

Weekend drivers are speeding most

Sunday proved to be the fastest day of them all. According to our analysis of speeding statistics data from the Department of Transport, 53.8% of speeding incidents happened then, with the quieter roads offering no obstructions to those who wanted to break the rules.

The early hours were also when people were most likely to put their foot down. On motorways, 53% of drivers were speeding at 5am, rudely awakening anyone they passed. Things got even earlier on single carriageways, where 3am was the fastest time for 30% of road users, while 5am again proved popular on 30mph roads. On these often suburban roads, a worrying 81% of speeding happened first thing in the morning.

Birmingham drivers have the highest number of speed-related penalty points

We also analysed our own quote data to find out which cities in the UK have the highest number of penalty points for speed-related offences. We looked at the number of drivers who said that they had speeding fines and/or penalties whilst filling out a quote for car insurance and which city they live in.

The data revealed that out of those who quoted, drivers in Birmingham were being handed out the most fines and penalties for speeding with 3,021 drivers declaring speeding-related offences. Belfast followed suit with upwards of 2,000 drivers admitting penalties and Sheffield rounded off the top three with 1,980 drivers.

Merseyside motorists search for more speed awareness courses than any other city in the UK, with an average monthly total of 750.[3]

The courses, offered to drivers for minor or first time speed offenses, aim to provide the training that will keep people below the speed limit. These courses are so popular as they educate drivers on the dangers of speeding and mean they don’t receive points on their license, and it’s not only Liverpuddlians looking to book them. 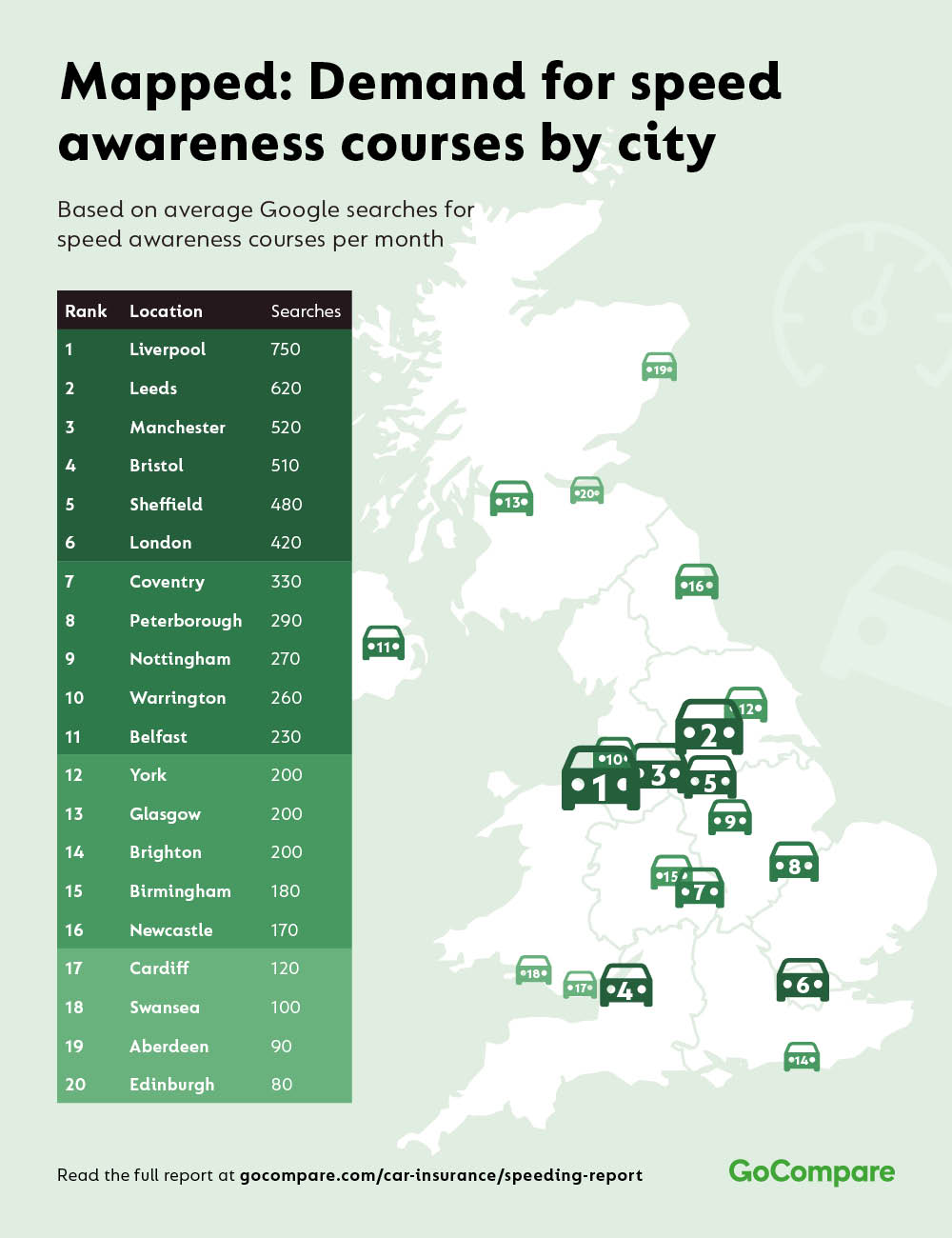 Leeds courses were also popular, with 620 monthly searches, while Manchester drivers amassed a monthly average of 520.

Can speeding affect your insurance costs?

Getting points on your driving license can increase the amount you have to pay for your car insurance. It shows you’re not a responsible driver, meaning insurers can’t be sure you won’t crash your car and require expensive payouts.

The best way to get cheaper car insurance is to drive safely - have a long period of no claims, keeping your license free of any points for speeding or any other reckless motoring.

We can help you save money on your car insurance, but you’ll need to keep an eye on the speed limits yourself.

[1]GoCompare requested FOI data from police constabularies across the UK to find out which police forces handed out the most driving fines for speeding. Using this data, analysts were then able to forecast the estimated number of fines likely to be handed out and the amount spent on fines for the next 4 years.

[3]Google search data was used to find out which cities were searching most on average per month for the term ‘speed awareness courses’.