Who are the electric car buyers?

We’re comparing more electric car insurance all the time, but who’s driving them? Our report reveals where green transport is the most popular.

Who’s buying the most electric cars? 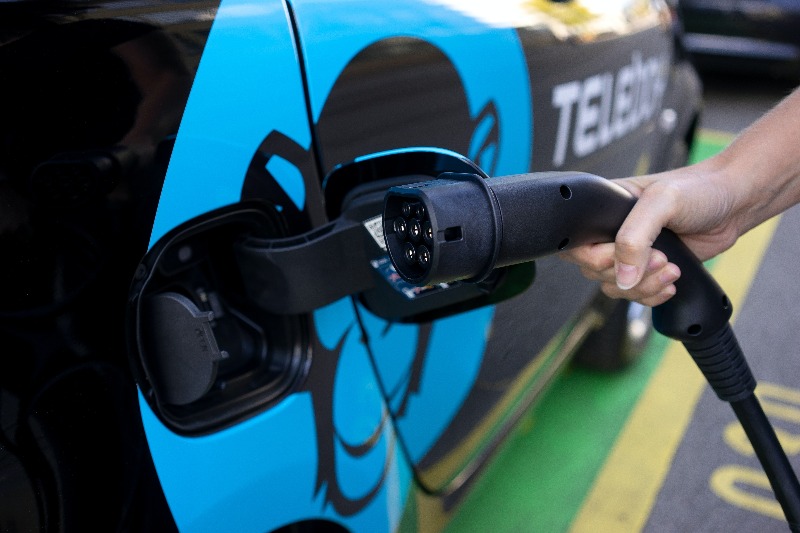 It wasn’t so long ago that the idea of driving an electric car was seen as a bit of a novelty, but with the sale of new diesel cars set to be banned in 2030, going green could soon be the best option for millions of UK drivers.

But has a previously expensive option become a more accessible alternative to fuel? And if so, who is ahead of the trend when it comes to electrical automotives?

We compare all kinds of electric car insurance, from plug-in hybrids through to self-charging electrics, so we’ve found out who’s buying electric cars and the most popular brands.

With some electric cars being more expensive than traditional fuel powered vehicles, it’s no surprise to see that their drivers commonly have higher earning jobs or the savings to spend. Retirees make up 10.5% of all electric vehicle (EV) owners, while company directors account for 8%.

Unlike other cars, EVs are difficult to sell second hand due to the way their batteries depreciate.So most vehicles are sold new, making their price points higher than that of a used model.

IT consultants (1.3%) and students (1.4%) own fewer electric cars than any other profession.

The occupations that are most likely to drive electric vehicles

Glasgow is home to the most electric car drivers

The Scottish city of Glasgow has more electric car drivers than anywhere else in the UK, with 704 electric cars registered there from drivers who quoted their car insurance with us. This is more than urban hubs such as Birmingham (628) and Manchester (591), and could be explained by the many free electric car charging points set up across the country.

At the other end of the table, Slough (399), Colchester (389) and Sutton Coldfield (369) are some way behind when it comes to driving green, although with government initiatives that could lead to a decline in traditional fuel sales, that could soon be set to change. 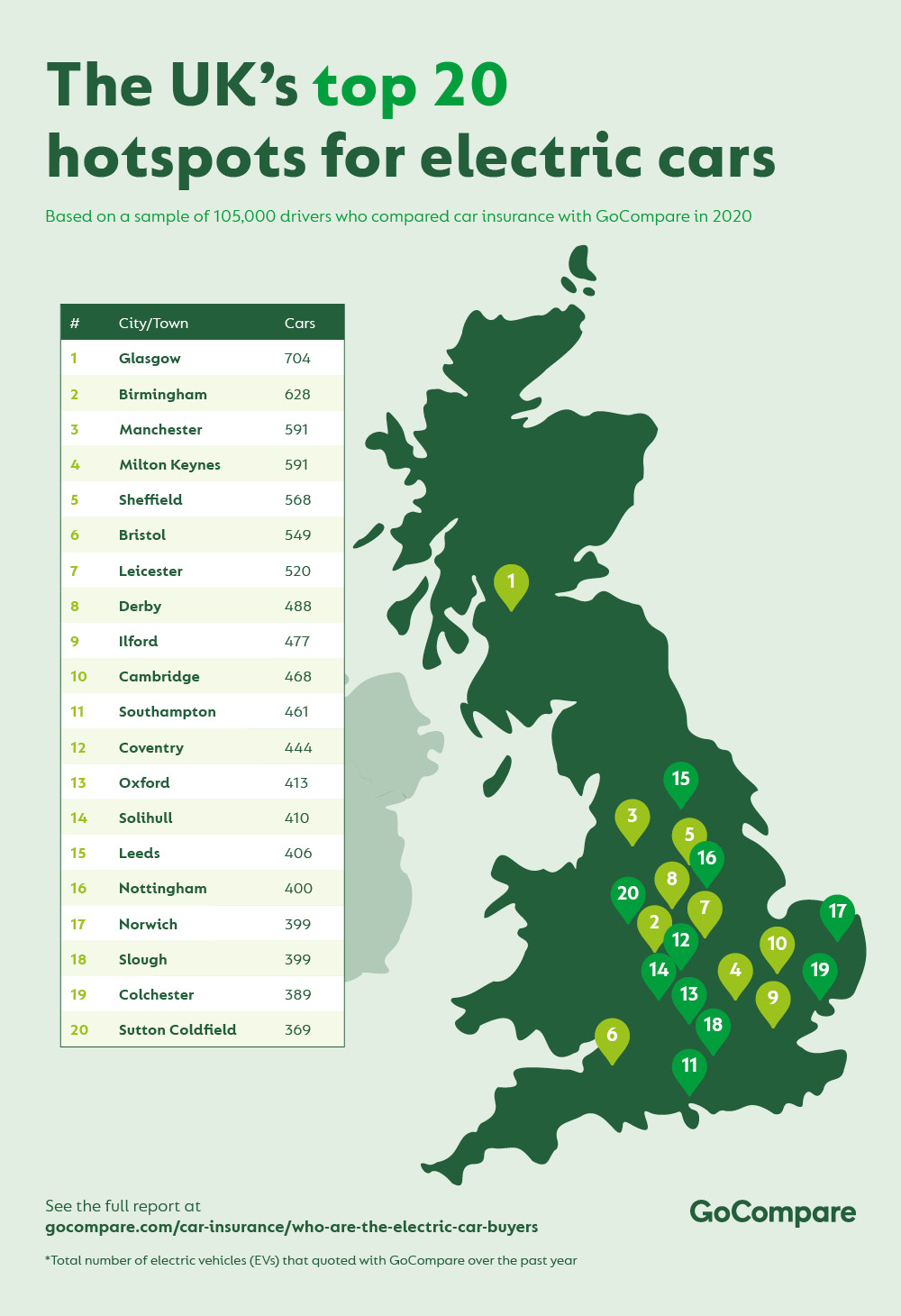 Tesla makes up 33% of all electric car sales

One of the original pioneers in electric cars, Tesla, remains the most popular, with 33% of all our electric car insurance quotes being for their models in the last year. In second place is Nissan, whose Leaf range sees them account for 19% of all quotes. A bit further back in joint third place are Renault and BMW with 9%, showing that traditional fuel car companies are putting up a fair fight.

Audi’s electric cars only made up 2% of our car insurance quotes in the last 12 months, leaving them with some catching up to do. 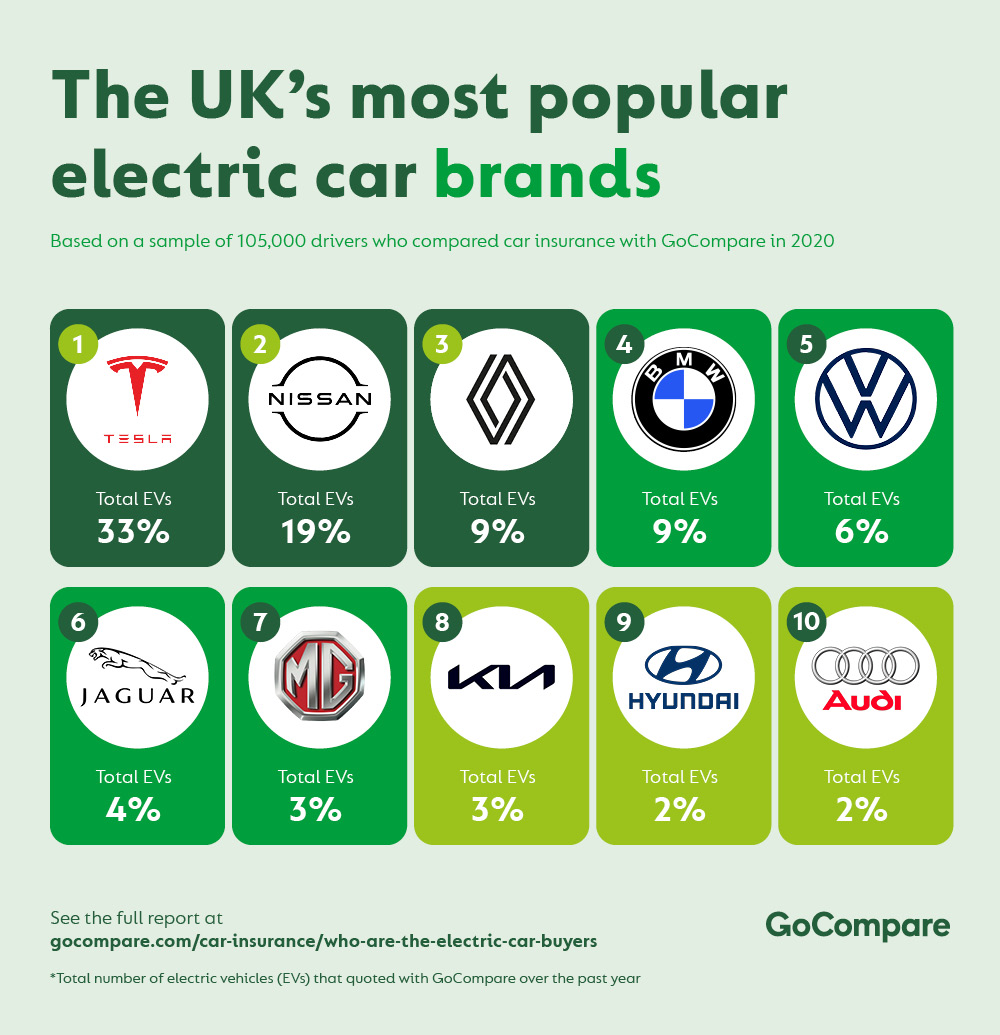 The Tesla Model 3 is the car everyone is after

Not only is Tesla the most popular electric car brand, their Model 3 made up 22% of our car insurance quotes, making it the most popular model on the market. The Nissan Leaf came in second place with 18.7%, while Tesla completed the top three with 10.9% of quotes for the Model X.

The only traditional supercar to make the list was the Porsche Taycan, with 1.4% of our quotes going out to the £83,000 speed machine. 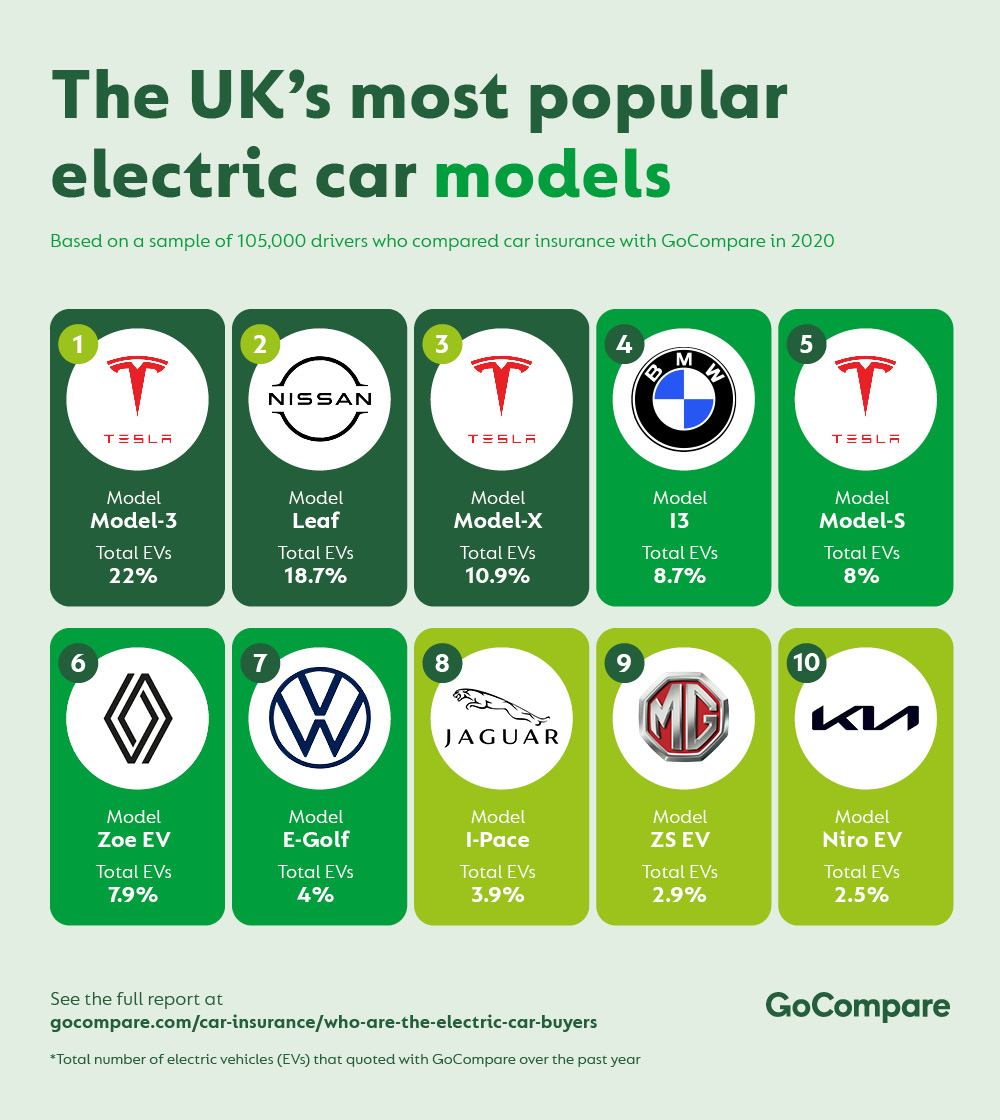 The age split in electric car drivers show how different generations are looking for a different kind of driving experience. Gen Z, those aged between 17-24, choose to drive the Renault Zoe, with the relatively affordable hatchback providing the perfect electric solution for urban driving.

Millennials (25-34) and Gen X (35-40) both prefer the Tesla Model-3, a larger estate car that would be more suitable for family driving.

Older generations - aged 41 and upwards - all prefer the Nissan Leaf, with the car being famed for its reliability, safety and long-lasting battery life.

The UK’s most popular electric car models by age 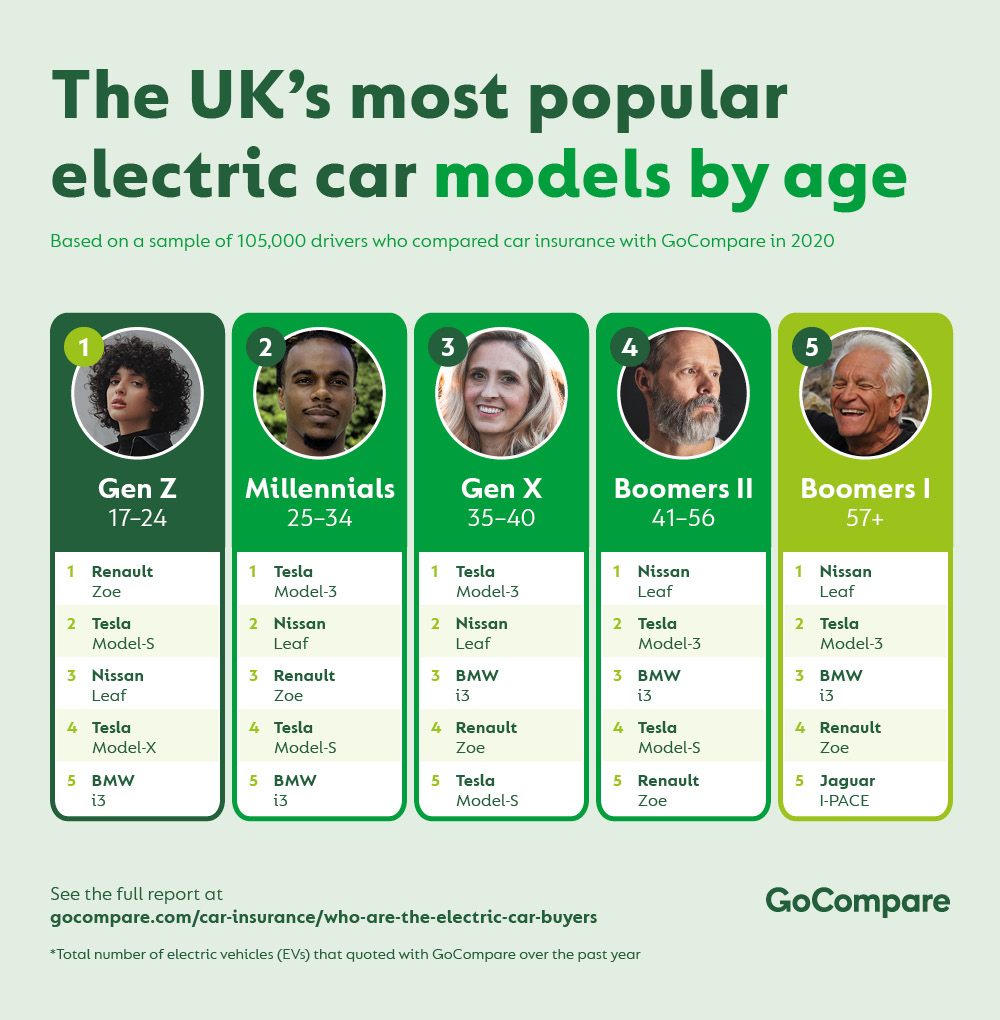 Men and women both prefer the Tesla Model-3

In yet another list that the Tesla Model-3 comes out on top, the gender split shows the Model-3 to be the most popular with men and women drivers. In fact, the top three were all the same for both groups, with the BMW i3 in second and the Nissan Leaf Tekna in third.

It was only at the bottom of the table where things were drastically different - men really don’t rate the Polestar 2, while women stay away from the Kia Niro. 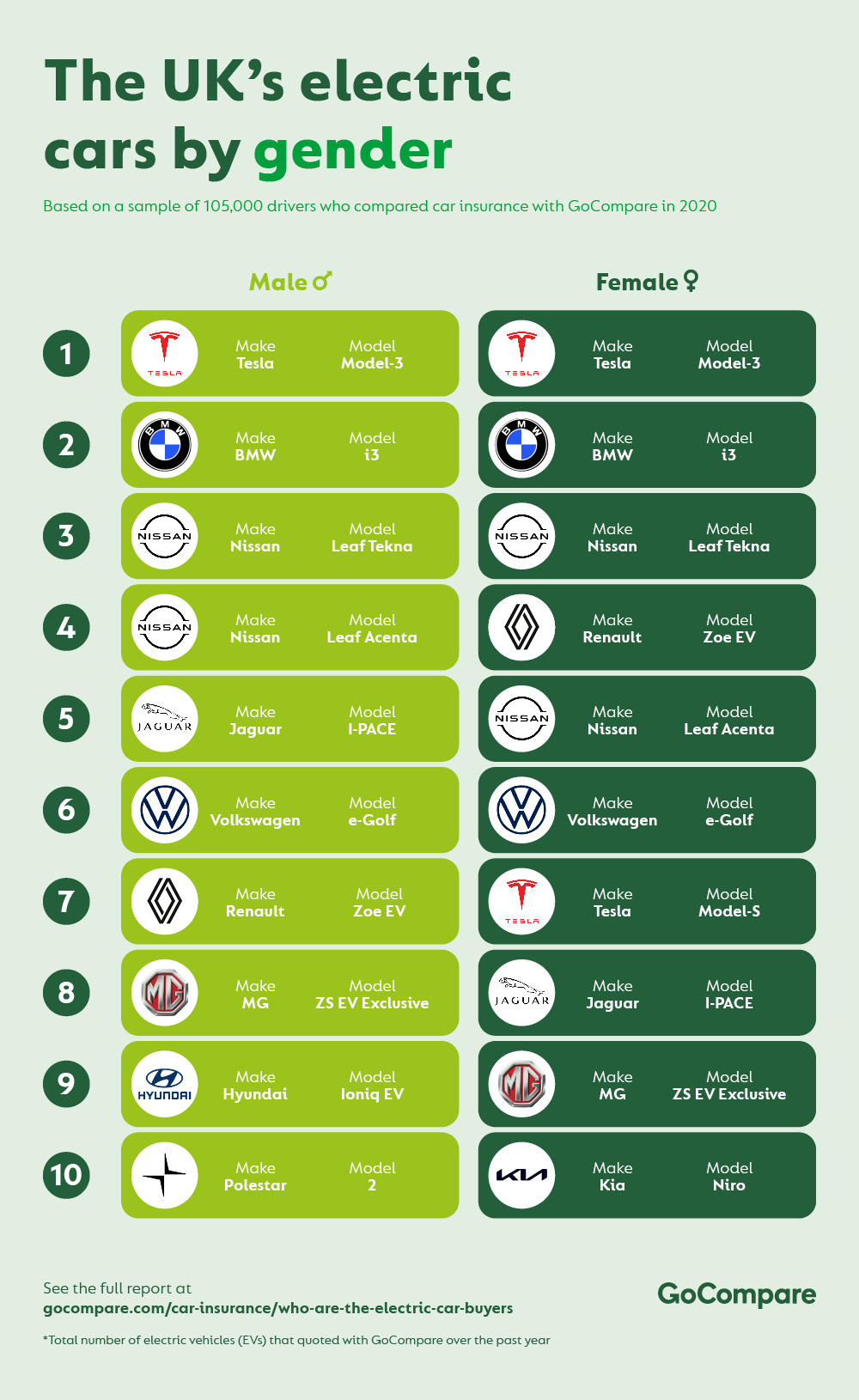 Whatever electric car you’re driving, we could help make it more affordable

With electric cars only set to increase in popularity, there’s never been a better time to leave petrol stations behind and turn to a life of plug-in charging. We’ll help you compare insurance quotes on all kinds of electric car makes, from specialist electric car insurers through to the best deals from the most popular names on the insurance market.

Not only will you be helping save the environment, you could be saving money too.

Analysts reviewed over 105,000 car insurance quotes conducted by drivers of electric vehicles across the UK between 1st March 2019 – 28th Feb 2021 at GoCompare.com