Animal crackers – we meet five exotic pets and their owners

Cats, dogs rabbits and gerbils are all well and good, but some people's pet choices are a bit more…unconventional. Here, we meet five owners of some atypical domesticated animals and ask them what life’s like with their unusual companions... 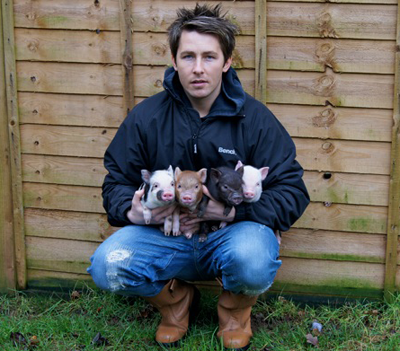 Whether you call them micro pigs or teacup pigs, these ridiculously sweet swine are – in the words of a man who owns 10 – “one the easiest pets you could possibly care for.” Owain calls them 'pint-sized pigs'. And in 2009 he started breeding them as well as keeping them as family pets. “It’s the idealistic country lifestyle isn’t it,” he says. “A few pigs and maybe some chickens. They’re such a joy to have around; as long as you socialise and interact with them, they’re fantastic. You just need the right environment; I always suggest a small house outside and a pen. You need to feed them twice a day and change their bedding once a month. Contrary to the rumours, they’re incredibly clean!”

As low maintenance and clean as they are, however, they’re also still officially farm animals. No reputable breeder will sell you one before you’ve been granted what’s known as a CPH number and they can’t be transported without a licence; which automatically incurs a 20 day standstill on further movements once transported. “There are a lot of misconceptions,” admits Owain. “I’ve turned people away because they’ve asked about keeping the pig in their bag like an accessory! You have to be wary of diseases as you would any farm animal. But it really is worth it.” 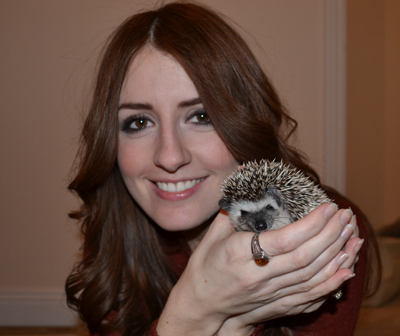 If you’re not twitching with cute overload right now, please consult a doctor. But with essential weekly baths, nail clippings and sprays with almond oil required – not to mention an immune system so weak they can’t even eat the bugs in your garden – these pretty little hoglets are quite the high maintenance pet!

“They need a lot more care than most people would realise!” admits Hana, proud owner of a baby hedgehog called Tilly. “They’re quite shy, solitary animals and need a lot of attention to make them like you. Their affection isn’t unconditional, but it’s very rewarding."

Hana likens her recent relationship with Tilly to Drew Barrymore’s short-term memory-loss flavoured rom-com 50 First Dates; small steps are made each day to assure her hog no harm. Even by keeping a small belonging of hers in Tilly’s house as a reminder of her smell, Hana knows it will take about a year to get gain Tilly’s confidence. I’m hoping Tilly will be used to me by then,” says Hana. “Moving house can be stressful for them. Even though they leave their mums at a young age it’s very overwhelming… for both of us!” 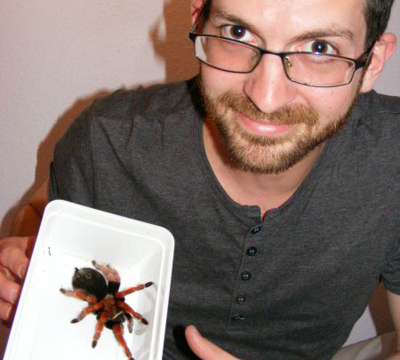 Scorpions will never stop considering you a threat, you can’t stroke them, and they will never fetch your newspaper. So why own one? “They’re fascinating!” answers Richard. “They’re incredibly interesting to observe and take care of. I don’t have a relationship with them; they don’t know me as an individual. Friends and family name them, but for me it’s about being able to study the ecology and behaviour of them in your own living room! It’s amazing.”

Part pet, part scientific observation, part challenge, Richard’s fascination for keeping inverts (pets with no backbone) is simply down to childhood asthma. Furry friends a no-no, he turned his focus on lizards and toads.

His passion has developed so much he set up keepingexoticpets.com, where he promotes responsible exotic animal ownership. As well as scorpions he also owns leaf insects and a selection of tarantulas (as pictured). It sounds impressive, but for Richard it’s a far cry from his glory days. “Oh I’ve had thousands!” he grins. “It can be carnage – you have to split them up. Back at university they let me have a room especially for my spiders in the biological science building. That was when I was breeding in true style!” 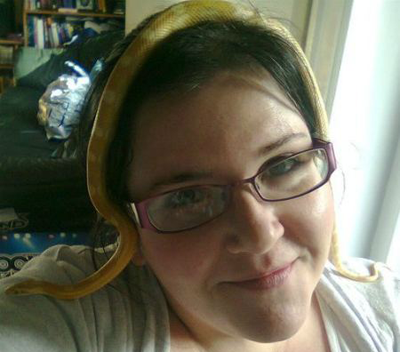 Rachael doesn’t own one snake. She owns six, two of which she’s rescued herself! “I never set out to have this many!” she laughs. “But you see people mistreating them and you can’t sit back and do nothing. It’s crazy; people buy them then ask really basic things like ‘how old do they live up to and what temperature should I keep them in?’ It’s all really basic stuff and there’s so much information available out there. Just Google it!”

We’ll take care of this for Google; they can live up to 30 years and their temperature should be set on a gradient so they can choose themselves as they need somewhere warmer to sleep once they’ve eaten their weekly mouse. Rachael’s snake set comprises two rough green snakes, two pythons, one corn snake and one rat/corn snake hybrid, all named after Harry Potter characters. Our favourite is Cedric the python, Rachael’s first rescue. He’s blind in one eye. “We were in a pet shop and this lad came in and handed over this really beaten up snake,” she tells us. “The shop owner didn’t look like he cared. What could I do? He’s beautiful now. He’s like a dog, sitting on the settee. You can stroke his chin!” 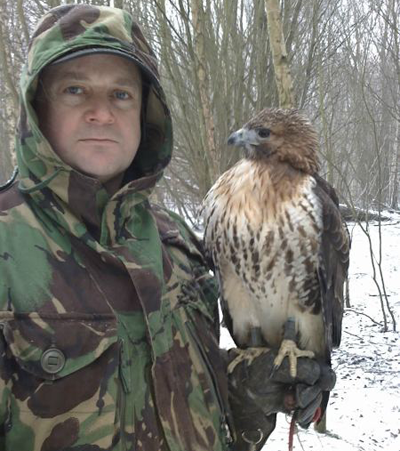 Owner: Shaun Bannister, Wrexham The veritable kings of unusual pets. Although pet is a misleading word: falconry is a sport, and as such should be taken seriously with dedication and commitment. Huge amounts of time, space and appropriate hunting ground are necessary to keep birds of prey. “I can’t stress the responsibilities enough,” says Shaun who’s been a birdman since his early teens and currently owns 10 feathered friends including harris hawks, kestrels, barn owls and redtail hawks.

“It’s an incredibly rewarding sport but it’s essential to research it entirely and have a mentor to make sure you’re caring for your bird and training it well.” The process of training is fascinating.

From blind feeding, strict weight maintenance and a varied diet (cockerel chicks, turkey chicks, quails, mice) to training it on a line with a loure (a dummy hunting quarry) to eventually hunting; the owner has to instil trust in the bird from the very start. But, as Shaun says, “it’s not rocket science.” “As long as you have a natural affinity with animals, it’s relatively easy,” he explains. “They get a sense whether you’re confident or not. But it’s not for everyone, so please do a lot of research and planning first.”

Got an exotic pet? Then you’d be barmy not to get them insured. And what a better place to start your search for bargain exotic pet cover than Gocompare.com?