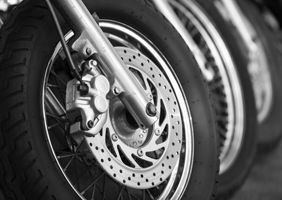 My first experience of motorcycling wasn’t quite as haphazard as I’d imagined, despite the signs not being particularly promising. I hadn’t fallen off, which is as good a start could have been expected, but it was still something of a shock to the system.

But, with the guidance (not to mention patience) of Celtic Rider Training’s Simon Walsh, I’d gotten to grips with the basics without being scared away. Today is a different kettle of fish altogether though. If all goes well, I’ll be able to legally ride a motorcycle with an engine of up to 125cc unaccompanied, providing I display ‘L’ plates and I don’t carry a passenger or go on the motorway, for the next two years. What's more, I could start enjoying the relatively cheap running costs associated with commuting with a bike rather than a car. Today is the day I take my Compulsory Basic Training.

Unbelievably, until 1990 it was perfectly legal to buy a motorcycle and ride it away without any basic knowledge of, well, anything to do with it. “Every showroom had their own horror story of a rider pulling away and having an accident five minutes down the road,” says Simon Walsh, my biking instructor. For many riders of a certain age, training consisted of little more than being put on a bike and told to go, with the test itself being far less stringent. Now, any prospective biker has to go through a CBT course, which will cover just that – basic on-the-road safety, how the bike works, and actually how to ride the bloomin’ things. They then have two years to pass the full motorcycle test – if they don’t they’ll have to go through the CBT again.

We get through the familiar territory of safety equipment, and move outside. It turns out that bike ownership and maintenance is a lot more ‘hands-on’ than that of a car – weekly checks of oil, brake fluid and regular applications of WD40 to the bike and oil to the chain are a must for a safe ride. Somebody who had once, oh, I don’t know, accidentally put oil into the radiator of their car and had to call out the AA to remedy it (I DEFINITELY DIDN’T DO THIS) might find it all a bit intimidating.

Because of relatively limited view afforded by bike mirrors, the loss of peripheral vision caused by wearing a helmet and the natural 'blind spot', it's essential we go through the observational checks that are essential for making sure that you can be aware of hazards approaching from the rear. Getting on to the bike, it would appear that my brain and muscle memory has decided to completely forget what it was instructed yesterday. Not for the first time today, I stall. Then I do it again. And again. And again.

Finally, I get up and running. We swiftly move through gear changes (I’m now getting up to the giddy heights of third) and stopping to turn at junctions. Just as I’m getting accustomed to picking up a bit of speed, we switch to riding slowly. Very, very slowly.

Cone, but not forgotten

Thanks to the laws of physics, riding a motorbike is a lot easier and less wobbly at speed. But travelling slowly and steadily – essential for threading through traffic and doing turns in the road to head back in the opposite direction – requires a combination of plenty of revs from the throttle, riding the clutch and a heavy foot on the rear brake. Add to this the obligatory ‘lifesaver’ glance down the road, and it needs rather a lot of coordination.

Eventually, I manage a few turn in the road, and then manage to tightly navigate some cones, before picking up speed again ready for the emergency stop procedure.

A quick sandwich and a chat later, and we’re joined by another rider for the afternoon, Jesse Baker, an 18 year old 3D design student from Cardiff. He completed the CBT after his sixteenth birthday, but having not managed to pass his test in the past two years, he’s having to do it for a forthcoming test. With plenty of road experience behind him, and a family of bikers at home, he’s a lot more au fait with motorcycling than I am, and it shows. He asks me why I’m doing the CBT, and I tell him if it’s for work. “What are you a pizza delivery boy?” he asks. Consider me cut down to size…

After the classroom session, where we go through hazards, awareness and technique for approaching roundabouts and junctions it’s time for a quick run around the track to re-familiarise myself with riding technique, and it’s the time to face the road. During the lesson, a thunderclap shakes the building to it’s very foundations, and a downpour of monsoon proportions ensues. It all seems very ominous. Thank goodness for those waterproof trousers. “It’s actually easier riding on the road,” says Jesse, but I’m unconvinced.

With my helmet on, it’s unlikely Simon can see my lip trembling with fear, but he must have spotted the nervousness in my eyes. He asks me if I definitely want to go through with it. “I’ve got no reservations about taking you on the road,” he informs me. “But it’s up to you.” I’m hesitant. It’s something I feel I should do – after all, I wouldn’t want to waste my own time, or Simon’s. I duly ‘man up’ and oblige.

Simon will be following me on his mean-looking Kawasaki GT1400 and issuing instructions via radio. We move away from the riding centre – true to form, I stall a few times before moving off – and on to the road in the direction of the Valleys. I’m all too aware of the large, heavy cars around me.

Heading up over the city flyover and picking up a bit of speed, there’s a mixture of clear blue sky and ominous black clouds ahead over the mountains. In a car, it would have been an impressive enough sight, but on two wheels, it’s even better. We head in the direction of the fearsome Coryton Interchange – a vast, multi-sectioned roundabout which connects the M4, Cardiff and the valleys. It’s confusing enough in a car, but on a bike which I’ve had little experience on, I’m pretty grateful for the instructions being communicated to me through the radio.

We head up to Treforest and perform the procedures that we’ve been taught on the track, until they’ve been performed to Simon’s satisfaction. Jesse’s a lot quicker to get things right than me, but I eventually get it together. It’s then back to Cardiff, back the way we came.

I’m hesitant pulling off and leading the way, and very nearly have an ‘episode’ while pulling off. But a few deep breaths and a pep talk from Simon, and I’m back, reaching the giddy heights of 50mph on the dual carriageway. Alright, so I’m not breaking any landspeed records, but what with the great flashes of lightening overheard, it all feels rather dramatic as I trundle along the A470. We return back, and debrief. I’m presented with a certificate which entitles me to ride a bike for the next two years. I take my gloves off, and I’m not sure whether they’re wet from the rain or the sweaty-palmed anxiety confronting the roundabout.

Whether I will decide to switch from four wheels to two in a hurry is matter altogether – after all, it’s not called compulsory ‘basic’ training for nothing, and it'll be a while before I'm a confident rider. But one thing’s for sure – I certainly seem to notice motorbikes a lot more on the road when I drive home. “The best part is it gets better every time you hit the road,” says Simon later. I think he may be on to something.