Festivals on the cheap 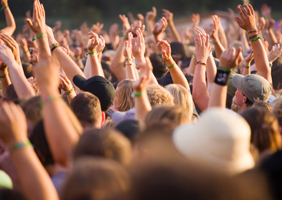 "In what other capacity can you legitimately run around fields at 4 o’clock in the morning with random strangers, three sheets to the wind and covered in UV paint?"

According to the Association of Independent Festivals, Brits spent an average of £461 each at summer festivals last year, up from £438 in 2010 and £408 in 2008. Not huge jumps, admittedly, but indicators that those annual three days of hedonistic madness are just going to get more and more costly.

Indeed, with Reading Festival ticket prices hitting an all-time high of around £200, 2012’s figure is likely to tip the £500 mark.

Nonetheless, people are still buying tickets. In what other capacity can you legitimately run around fields at 4 o’clock in the morning with random strangers, three sheets to the wind and covered in UV paint? Folk are still prepared to pay the price to party, but they’re just getting more selective about which ones they give their hard-earned dollar (as indicated by Festival Republic resorting to TV advertising for Reading and Leeds this year, few festivals can guarantee a sell-out nowadays).

And despite these cash-strapped times, watching the pennies doesn’t have to mean less festival fun, as these tips demonstrate.

Ticket prices frequently come under the spotlight because of the ludicrous fees and charges tacked on at the checkout. Buying tickets as a group can help eliminate some of the extra cost.

If you’ll be taking a bus or train to the festival site, book a seat as soon as possible as prices get considerably more expensive as the departure date approaches. If you’re travelling in a group, look out for deals and group-booking options; most train companies offer discounts for parties travelling together and in some cases four adults could travel for the cost of just two under some off-peak ticket types.

Yep, that pink camping lantern is cool, and sure, a luxury camp bed would be nice, but do you really need that stuff? Festivals are not known to be the most comfortable experiences – after all, you’re there to party in the rough. Instead of blowing the budget on novelty camping gizmos, consider what will really be useful and will save you some cash while you’re there. A couple of good quality water carriers will mean you’re not at the mercy of expensive bottled-water sellers, for example. Or a portable BBQ will help keep you warm and give you the opportunity to cook your own bacon baps, instead of having to fork out a fiver a pop in the arena.

Look at the weather forecast

Yep, consulting the met office before you go does kind of go against the carefree spirit of festivalling, but if you know it’s going to rain you can take your wellies with you, rather than dropping £20 on a novelty pair while you’re there because you’ve been caught short. Ditto waterproof jackets, suncream and hats.

While a lot of festivals are militant about what can and cannot be taken into the main site, you’re usually free to take whatever you like to your campsite (usually with the exception of glass). Therefore it makes sense to take as much booze and food as you can carry – whatever you eat or drink at the campsite you save on in the main arena. Some festivals will even let you take your own alcohol into the main site, so a crate of beer is a wise investment in the face of £5 pints at the bar.

Where food is concerned, remember that you won’t have the time, energy or facilities to cook up a storm, so think canned goods and packaged snacks. Eat as big a brekkie as you can manage to help see you through, and munching on cereal bars, crisps and biscuits throughout the day will eliminate the need for big meals, so you could probably get away with just one hot food purchase per day.

See if your festival offers an incentive for returning cups or food trays. Some offer as much as 10 pence for every beer cup returned, so a few minutes scouring your patch could net you a free pint.

Especially on the last day. Stall holders will be keen to offload their stock, so it’s always worth making an offer.

Queues for cash points at festivals are notoriously long, and many machines will charge you as much as £2.50 for the pleasure of getting your mitts on your own money. Take out cash before you go, and keep it hidden in a number of separate places (your tent, rucksack, different jeans, etc) so you don’t run the risk of losing the whole lot in one go.

Similarly, have a thorough wallet clean-out beforehand and take out things you won't need, like your driver’s license or credit card, which would be a pain to replace if lost.

Festivals are always in need of stewards and bar staff, so if you’re willing to spend a few hours each day pulling pints you’re probably in line for free tickets.

If mainstream festival price tags really are too much of a weight on your wallet, try downsizing. The UK is host to hundreds of festivals each year, so you don’t have to choose between the big names anymore. 2000 Trees Festival in Gloucestershire, for example, boasts three days of top alternative bands for a measly £60! Or Herefordshire’s Nozstock offers a weekend chock full of tunes and comedy for just £80. Or, go totally off the curve and try a festival on the continent instead. Spain’s smash-hit festival Benicassim is featuring some massive names in music this year, for just £155. Factor in cheap flights and you’re not far off average UK prices.

Use it, don’t lose it

There’s no point fretting over your finances if you’re not being careful with your money in the first place. Leave valuables at home, and make sure what you do take is insured. Use a UV pen to mark your gear in case it’s nabbed and later recovered, and make a note of your phone’s IMEI number before you go – if it’s lost or stolen you’ll at least be able to block it (better yet, take a battered old handset instead – you’ll really only need it for texts or calls). Keep your tent relatively messy to deter thieves and remember, nothing screams ‘valuables within!’ like a padlock.