Five convertibles for every budget 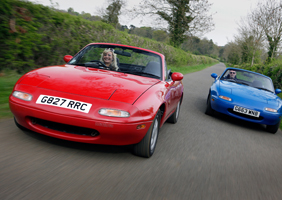 Convertibles - potentially quite a lot of fun

An interesting phenomenon presents itself in Britain whenever the sun shines – every third driver (or so it seems) wheels his convertible out of the garage, rolls back the roof and goes for a spin.

It’s an oft-quoted demi-fact that Britons buy more cabriolets per capita than any country on the planet; this may not be strictly true, but there are certainly a lot of them out there. So given the ubiquity of the open-air tourer, how are you supposed to tippy-toe through the ragtop quagmire and find the right sunshine cruiser without inadvertently landing yourself with a leaky, scuttle-shaking terror? Fear not, we’ve hunted out a suitable candidate for every budget... 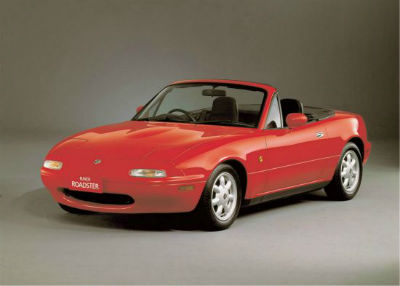 The mkI Mazda MX-5 is frequently referred to as a modern Lotus Elan, and there isn’t a hint of hyperbole in this – all of those classic Norfolk design features were lifted wholesale by Mazda’s engineers, from the pop-up headlights to the slender door-handles. Even the exhaust note was tuned to sound like a classic British sports car. Nowadays they’re an absolute bargain - £1,500 will buy you a solid early 1.6; up your budget beyond £2,000 and you’ll have your pick of the later 1.8s. (Don’t believe the derogatory rumours about the detuned, 88bhp 1.6 either – you’ll still have all sorts of fun in one of those.)

It’s a relatively cheap car to run, returning up to 30mpg even with the most enthusiastic B-road tomfoolery, and parts and service items are mostly inexpensive. Even a replacement roof won’t break the bank; if you factor a few hundred quid into your buying price for a new lid, it’ll make the car look brand new.

It’s a good idea to keep it simple and eschew the power steering – it’s the closest you’ll get to driving an Elan without spending £30k for the privilege. Oh, and the gorgeous manual gearbox is a masterpiece of tactility that will make your heart smile. 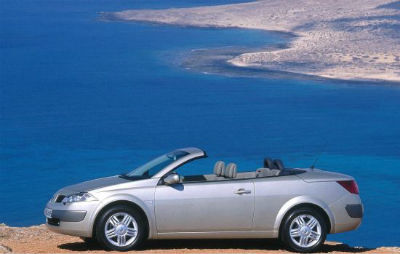 The Renault Mégane CC is basically a Karmann-designed reworking of a tried-and-tested hatchback/saloon formula. If you’ve driven a regular Mégane, you’ll feel at home here – the dash and controls are all shared, logical switchgear and (slightly scratchy, but robust) plastics included. There’s a little less legroom in the rear and the tail is slightly longer, but you can fold the metal & glass roof away at the touch of a button, leaving you free to enjoy the tractable 2.0-litre petrol engine (the sweetest in the range, and the one to go for) as the wind whistles past your lugholes.

Ignore the flashy 17” alloys – the sixteens with their higher-sidewalled rubber will give you a much better ride. It’s not a sports car, so why ruin it? Enjoy this French poppet for what it is – a cheap but well-appointed boulevard cruiser. There’s even enough boot-space for your weekly grocery shop when you’ve got the roof down, which is not to be sniffed at. 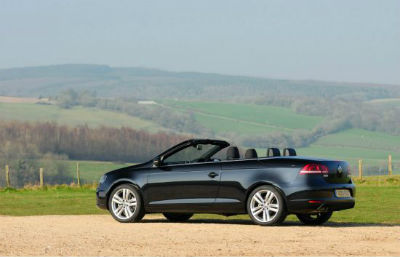 Twenty years ago, the notion of a diesel cabriolet would have been laughable. An XR3i with a van engine? No thanks… But diesel technology has been refined and smoothed into something beautifully user-friendly, and now goes with a drop-top like peaches and cream. There are a number of options here – Audi A4 TDI, BMW 330d and so on – but the canny buyer in this price bracket would be remiss to overlook the VW Eos.

The Eos is to the Golf what the Mégane CC is to the Mégane – a slightly elongated version with a solid folding roof. It is available with the Golf GTI’s spicy 2.0-litre turbo engine but, as with the CC, this isn’t a sports car – opt for the frugal Eos TDI and enjoy headscarf motoring without the inconvenience of constantly keeping a paranoid eye on the fuel gauge. Being a VW, you can be sure that it’ll be reliable and well screwed together, and depreciation shouldn’t be too horrible either. 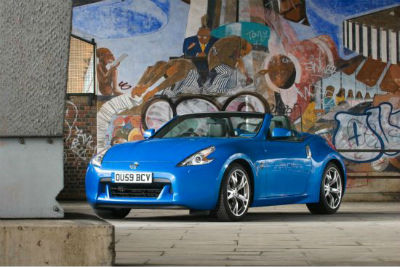 That evocative ‘Z’ badge has been glued to a number of exciting Nissans and Datsuns over the years – the iconic 240Z, the eighties-chic 300ZX, the Gran Turismo poster-boy 350Z… and now the 370Z. This is a hairy-chested brute that blows anybody who uses the phrase ‘hairdresser’s car’ over the Armco and into the weeds.

The absence of a fixed roof does nothing to dilute the sheer competence and enthusiasm of the Z’s surefooted chassis, while the potent, brawny 3.7-litre V6 offers more than enough grunt to mess up your passenger’s barnet: 323bhp, 0-62mph in 5.3s and a top whack of 155mph. It has a ‘Synchro Rev System’ which blips the throttle for you when you change gear (ineffably cool, that), and there’s a 140-litre boot as well, which should swallow a couple of weekend bags easily enough. A strong all-rounder, and it makes a brilliant noise too. 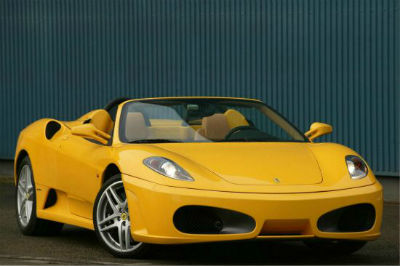 Arguably the coolest part of a Ferrari is the open-gate gearbox. Of course, Ferrari don’t build cars with manual ’boxes any more, so the newest cavallino rampante open-gate action available to you is found within the F430. (Well, aside from the California… but the F430 has the engine in the middle, which is more fun.)

The F430 Spider is made of shiny aluminium and stuffed with F1 technology, from the 483bhp 32-valve V8 to the (optional) carbon-ceramic brakes, the clever E-Diff to the Skyhook suspension. It’s got Enzo-style taillights, Testarossa-esque name imprints on the door mirrors, and it sounds like a tumble dryer full of gravel. In a good way.

Sure, the purists will espouse the merits of the tin-top Scuderia with its F1 transmission and racer aesthetic, but they won’t be picking the bugs out of their teeth on the Riviera, will they? And that’s what open-top motoring is all about: the heady, visceral thrill of engaging in the driving process as one with the car, open to the elements, arriving at your destination windblown and invigorated. Perhaps that’s why us Brits buy so many soft-tops – we’re obsessed with the weather, and convertibles bring us closer to it.

Thinking about buying a convertible? Then for heaven’s sake, don’t spend more than you need on insuring the blooming thing. Gocompare.com allows you to compare car insurance quotes from loads of insurers with the minimum of fuss, so give it a whirl.