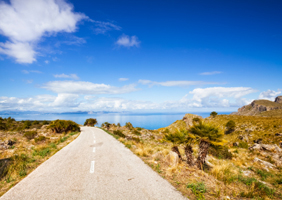 A road, abroad. Take care on one of these

On the face of it, hiring a car should be a pretty straight-forward process. Choose your car, choose your dates, hand over your ID and off into the sunset you merrily pootle.

Alas, car hire companies – the gatekeepers to your independent holiday frolics – have long since clocked on to our penchant for a good worry and are now apt to capitalise on the old ‘but what if?’ by throwing all kinds of confusing terms, conditions, clauses and car insurance implications into the mix.

Add to this a plethora of stringent local motoring laws and some fairly damning reports from the AA indicating that many hire cars abroad are ‘death traps’, and suddenly a jaunt off the beaten track seems like a lot of hard work. But it doesn't have to be.

Understand what you’re paying for

Getting an accurate car-hire quote is time consuming. Frequently you’ll have to complete pages of forms before you’re even given a basic quote, and even then you’re liable to see extras and hidden charges tacked on top, often turning what seemed like a good deal into the most expensive choice.

Excesses can be ferociously expensive (anything up to £1,300 in France or Italy), and hire companies will offer you the opportunity to reduce that figure by paying an additional daily supplement (known as additional liability insurance, a collision damage waiver or theft protection), which can significantly bump up the total cost of hiring the car.

Is it worth it? You’ll have to make a judgment call on that, but there are strong arguments for both sides; if you’re on holiday you’re likely already pinching the pennies, and such additional charges are likely to eat into your beer fund. However, an extra £15 a day is a small price to pay in the face of £1,000+ charges if the worst happens.

It’s also worth noting that some car hire companies won’t actually give an exact indication of the excesses you’re liable for until you’ve made a payment and have arrived at the hire station, which is another gamble. As such, you might consider taking out an independent hire-car insurance policy which could amount to as little as £3 a day and eliminate the faff of excesses and waivers proffered by car hire companies themselves.

Will you want to add additional drivers? Or use child seats? Things like this need to be stipulated at the time of booking, which again, is likely to bump up the final total. It is possible to make alterations to your booking once you’ve arrived at your destination, but that will usually cost more than if you plan ahead.

If your pick up and return destinations are different, be prepared to pay more for this, and have a slimmer choice of providers, too. It’s usually the big names that are able to offer this service, which can be both a blessing and a curse: there are more guarantees with bigger brands, but they’re the ones likely to rack up the charges. Think about your petrol requirements – this may well affect your choice of car provider. Some companies will ‘sell’ you a tank of petrol and expect the car to be returned empty, or will charge you for however much petrol you use from the tank. This is usually very expensive, so you're better off taking the car with a full tank and simply refilling it upon your return.

Ask about mileage caps and border issues, too. Is there a limit to how many miles you can do, or where you can take the car? This is important if you're planning a serious roadtrip.

And we mean thoroughly. That tiny scratch you didn’t think was worth mentioning when you picked it up could easily come back and bite you on the bottom a few months down the line when your credit card is unexpectedly charged (yep, they can do this). As such, make sure that an inspection form is filled out when you’re picking up and returning, and ensure the company is satisfied that everything’s in order when you leave.

Also take the time to do some basic safety tests; check the brakes and that the handbrake works, make sure the seatbelts are in good condition and give the engine the once over. A survey by the AA found that it’s not unheard of for hire cars (especially in the Med) to be in fairly shoddy condition, so if you have any concerns about the vehicle you’ve been given ask for an alternative model.

Always ask the company for an appropriate phone number to call in case the car does break down, but note that customers in receipt of a faulty car booked as part of a holiday package can claim compensation from ABTA.

No, this doesn’t mean slipping your sales guy a back-handed incentive for better service, it means taking a few minutes to familiarise yourself with the laws of the land you're in. For example, in North America it’s illegal in some states to have opened containers of alcohol anywhere in your vehicle. In Spain, failure to carry a reflective hazard triangle will be met with an on-the-spot fine, and in France it’s mandatory for all motorists to carry an unused breathalyser kit meeting French specifications. So make sure your car has any necessary bits of gear and bring it up with the company if it doesn’t.

On the subject of breathalysers, investigate the local laws for alcohol limits. In the UK a glass of wine or pint of beer is allowable before hopping behind the wheel, but many countries around the globe enforce a strict zero-tolerance policy towards drinking and driving, and failure to observe this could have very serious consequences.

Some local car hire companies will ask you to surrender your passport by way of a ‘guarantee’ in order to finalise a booking. The UK Foreign Office, unsurprisingly, says that this is a definite no-no. Also bear in mind that hire cars are often easy targets for petty criminals, so take thorough precautions with security, and only ever pull over for police.