A beginners' guide to stocks and shares 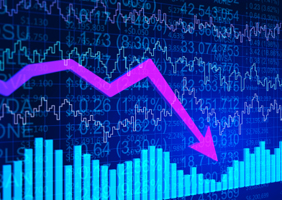 If your stocks and shares are doing this, it's probably not a good thing

"People are under the impression that there’s a henchman sitting in the bowels of the London Stock Exchange pulling levers, but it’s not the case.” Alistair Hodgson

It’s a much-glamorised Hollywood scene: hundreds of frantically-waving traders shouting and bawling on the floor of a stock exchange. ‘Buy! No, sell! Wait, buy. BUY MORE!’ Insane as it seems, that’s the basis for big-business trading on a global scale.

However, stocks and shares trading is, by-and-large, generally conducted in a more civilised, less hectic manner, and it’s not just fat cats getting a slice of the pie. Civvies with no more than a debit card and savings account can also get in on the action. But first, the basics.

In the UK, stocks are essentially a debt instrument. Here, you’re lending someone – a business or company – money, and there are a lot of people lending money on the same terms to the same organisation at the same time.

With shares, you essentially own a piece of a company. You take the risks and rewards (with your money) that the company does. But only certain shares will give you a right to a vote. It may even pay a dividend (if there is one).

Every individual has a tax-free savings allowance of £11,280. Up to half of this can be saved in a cash ISA, but the full amount can also be set aside for investments in stocks and shares. As you’d expect, you’ll pay no tax on any interest earned from your investments, but there is a 10 percent tax on any dividends paid (which is deducted at source).

At any one time there is a limited supply of stocks and shares for each organisation, and if the demand increases or decreases, so does the price of the stock or shares.

But who’s to say what’s in demand or not? According to Pilling & Co Stockbrokers Insurance Manager Alistair Hodgson, the whole market does – every individual trader, stockowner and shareholder.

“If you’re buying or selling, your decisions influence the market just as much as anybody else’s. The market is its participants. Some people are under the impression that there’s a henchman sitting in the bowels of the London Stock Exchange pulling levers, but it’s not the case.”

A timely example of this supply and demand paradigm is Barclay’s recent financial fiasco. Following a £290 million fine for fixing an Interbank lending rate, the company’s value plummeted £3 billion, and some investors – fearing great losses – sold their shares, causing a surplus in supply and therefore a drop in value. However, Barclays Chairman Marcus Agius then resigned, prompting a resurgence of faith in the group. More shares were purchased (or repurchased), driving demand, and pushing prices up by 5%, to the top of London’s leading share index.

This is the inherent nature of stocks and shares, though; their value is liable to go up and down, and this is the risk you take if you put your money into them, unlike bog-standard savings accounts.

“The risk to your cash when you put it in the bank is that the bank remains solvent,” says Hodgson. “With stocks and shares, there’s very little guarantee that the initial sum is safe.”

However, he adds, there are risk differences between the two. “Generally, you’d expect stocks to be less volatile than shares, thanks to amounts of money, interest rates and time periods being fixed. If for some reason the company goes under, it’s possible to get your investment back during the liquidation process – although there are cases where people lose everything. With shares, however, their value will have been wiped out long before a stockholder would need to worry. Shareholders are at the bottom of the pile and first to be hit if things go wrong.”

But, he adds, where there’s risk, there can be rewards. “With stocks, all you’re getting is interest. They’re unlikely to give you a big payoff. Shares have an increased downside, but also a potentially increased upside.”

In investments, as with life, you have to be prepared to weather inevitable storms, but if you’re very anxious about losing the lot it’s possible to implement a ‘stop loss’ on your investments. Here, you can set a point at which you’ll sell at a loss, rather than let values drop further.

A fund avoids you putting all your eggs in one basket by investing in a selection of companies, and there are any number of ‘Fund Supermarkets’ available from High Street banks that can facilitate this.

These offer convenience in the form of a consolidated statement of performance (which means you don’t have to follow each company individually).

You could also consider investing in a managed fund, which pools together money from several or many investors to give extra buying-power and access to markets otherwise restricted to individuals or investors with small amounts of money.

Spread betting, on the other hand, involves you choosing a selection of low-, medium- and high-risk companies. This could have a decent pay-off and can minimise the amount of commission and fees you’d otherwise pay to Fund Supermarkets and brokers, but does require a solid pre-existing understanding of stocks and shares.

As such, Hodgson recommends talking to a pro before making any decisions. “A stockbroker should have your best interests at heart. After all, they stand to gain from your investments too, through commission. They should ask you about yourself and take the time to understand the risks you’re willing to take.”

Bear in mind that investments like this are unlikely to make you rich overnight. You’re looking at a three to five year period before you can gauge how your investment will fare. As stocks and shares billionaire Warren Buffett once said “The stock market is a means for transferring money from the impatient to the patient.”

Tempted to get involved but still unsure? You can always try your hand at the market through a fantasy share portfolio, which many investment websites offer for free. Or for a slightly bigger buzz, investigate penny shares. Costing between 50p and £3 each, penny shares offer a fun way to explore the market without potentially bankrupting yourself. And who knows? You might even stumble upon a new Facebook, Instagram or Apple?