How soon is meow? Morrissey backs feline spaying and neutering 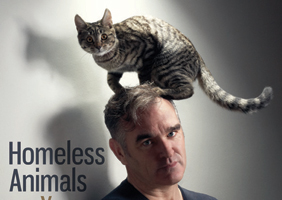 "Some pet insurance policies may be cheaper if your pet is neutered." Elaine Pendlebury, PDSA

Mancunian hitmaker and renowned animal lover Morrissey has called for cat owners to spay or neuter their pets if they haven’t done so already, on behalf of People for the Ethical Treatment of Animals (PETA). He’s also posed for this rather remarkable photo (left), with a handsome tabby on his head.

The ‘Some Girls Are Bigger Than Others' star commented: “Despite the fact that they're incredibly intelligent, animals unfortunately haven’t yet worked out how to slip on a rubber, which is why thousands of them are being put to sleep in overcrowded shelters and thousands more are desperately waiting to be adopted."

Morrissey is known to talk a lot of hot air, but spaying or neutering your cat is a wise move – feline charity Cats Protection  reckons that an un-neutered female cat can produce 20,000 descendants in just five years. There’s plenty of cats in the world already, lots of whom don’t have homes, without more being born.

And there are many more pluses besides, as Elaine Pendlebury, senior veterinary surgeon at PDSA, the charity for pets in need of vets explains. “In cats, spaying can prevent cancer of the womb or ovary in females, and in males it can reduce their tendency to roam and fight. This is important as it reduces their chances of catching feline AIDS (FIV), which is spread through bites and scratches.”

Moreover, spayed and neutered cats can be easier to handle than their fully-fertile counterparts – randy toms can be far more aggressive than spayed males, plus they’re more prone to gross urine spraying to mark their territory.

Neutering your cat can help reduce the cost of your annual pet insurance policy, too. “Some pet insurance policies may be cheaper if your pet is neutered, so I would recommend that owners investigate this with insurance suppliers and choose a policy that is best for their pet and their circumstances,” says Elaine Pendlebury. “It’s also a very good idea for owners to discuss preventive health care, like neutering, with their vet as soon as they get a pet.”