Millionaires who left their fortunes to animals 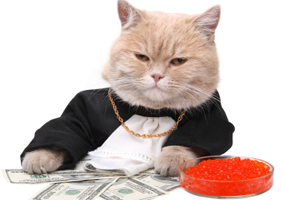 Does your animal have pet insurance? A nice warm bed? Good food? Plenty of exercise? You may think you’re doing enough, but some owners go much, much further.

Some leave their animals vast fortunes, so they can be cared for luxuriously after their owners’ death. Here are the millionaires who left their fortunes to animals.

This was the rags-to-riches story of 2011. Tommaso had been a stray cat wandering the streets of Rome, before being rescued by Maria Assunta, the widow of a wealthy property tycoon.

On her death, she bequeathed the black moggy her entire $13 million fortune, which included several estates. Tommaso went from being homeless to owning property in Rome, Milan and Calabria!

Sometimes, it’s the love of a particular animal that prompts a millionaire to leave it their entire fortune. But sometimes you have to question the motive.

University lecturer Christine Gill took the RSPCA to court to challenge her parents’ will after it emerged that they had left their £2million estate to the animal charity.

Following a four-year battle for the cash, Dr Gill was awarded the estate after the court decided her mother had been coerced by her husband into leaving the property to the RSPCA.

What is it about stray cats and handsome fortunes? When the much-loved British actress Berly Reid died, she left her £1 million home to her four cats, all of which had been strays that she had rescued.

Hamish, Coco, Boon, Tuffnel and Eileen continued to live in luxury even after their besotted owner’s death.

Leona Helmsley was the US businesswoman credited with saying: ‘We don’t pay taxes. Only little people pay taxes.”

Whether she did or didn’t utter that phrase, she became a byword for tax evasion and was given the nickname the ‘Queen of Mean’ for her aggressive business style. So maybe that’s why she spurned her fellow humans in her will, leaving $12 million to a Maltese terrier called Trouble.

This was challenged in court and the dog’s trust fund was reduced to $2 million – although $100,000 a year was spent on security after he received death threats from outraged humans!

£15 million may be a lot of money today, but it was even more back in 1931 when the American heiress Ella Wendel left that princely sum to her pet poodle, Toby.

Internet rumours suggest that the fortune has passed down a long line of Tobys (Tobies?) and is now worth $92 million – or £59 million.

You may think it’s just dogs and cats (oh, and children) that inherit vast sums, but that’s not always the case. Take Gigoo the hen.

She belonged to publishing mogul Miles Blackwell, who left her a cool £10 million. Clucking hell!

Not every wealthy pet gets to enjoy their owner’s entire fortune when they die. Alexander McQueen’s three bulldogs had to make do with just £50,000 when he passed away.

But he did leave a small fortune to animals – the Battersea Dogs and Cats Home in London and the Blue Cross each received £100,000.

The Queen Mother - £3m to her herd

The Sun newspaper reports that the Queen Mum left a £3 million trust fund to protect her cattle and sheep.

The herd and flock consisted of 28 Aberdeen Angus cattle and 100 Cheviot sheep. That’s around £20,000 each. Not baaaad (sorry).

Karlotta Libenstein – £43M to her dog

It’s not just humans bequeathing vast sums of money to their pets. When Gunther III died, the fortune passed into the paws of his only son and heir Gunther IV.

The pampered pooch’s fortune has been carefully invested on his behalf and is now worth even more. He was even rumoured to be the buyer of Madonna’s £5 million luxury mansion when she sold it in 2000.

No, you haven’t missed news of the talk show queen’s demise; she’s still very much with us. But Oprah has made no secret of her love for her pet dogs and the animals stand to inherit £30 million at her death.

It’s a good thing dogs don’t really understand money, or they might start lying at the top of the stairs where an unsuspecting human might trip…

Animals that lost it all…

Oprah’s dogs shouldn’t hold their breath though. There have been cases where animals were promised fortunes, only to see their owners lose it all.

Kaul the Congolese chimp is a good example. It was all set to inherit around £40 million from its doting owner Patricia O'Neill, who found it tied to a tree in South Africa and has cared for him ever since.

Sadly, in 2010 she discovered that her fortune had been lost and that she was down to her last £100,000. Mrs O’Neill said she’s too scared to spend money now in case her beloved pets are left with nothing.

Protecting your own priceless pet

So what do you think? Were they barking mad or just good people who loved their pets?

Here at Gocompare.com, we don’t really have a position on whether or not you should remember your animal companion in your will. But we do recommend taking out a pet insurance policy  to protect your beloved beastie if it’s sick.

After all, if Rover gets run over or Spot has a nasty rash, the last thing you want to be worrying about is whether you can afford the treatment...