What happens on a speed awareness course? 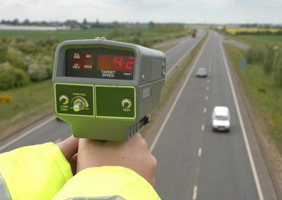 Speeding - neither big, nor clever

"Mercifully it's not a disciplinarian hand-spanking exercise."

Unlucky! That's the general consensus when you've been caught speeding, right? No remorse. No guilt. No shame. Just a lingering annoyance, coupled with a stern word with yourself about not spotting the cameras in time.

According to a 2008 survey from Onepoll, speeding is THE most flagrantly flouted law in Christendom. No matter how wholesome and morally sound our lives are, we've all been guilty of the occasional spurt of pedal-to-the-metalism. And most of us quite enjoy it. Until we get caught, that is...

Like me earlier this year. I was snapped on the M4 by one of the UK's 2,500 mobile speed cameras. My first ever licence points in over thirteen years, and caught driving just over the actual speed limit, I was given the choice... three points and a fine or a speed awareness course and (like a British Eurovision entry) no points.

Can a speed awareness course stop your car insurance premium from increasing?

The decision was easy - not only would it keep my licence squeaky clean, but it would negate the increased car insurance  premiums one has to endure with a grubby SP50 endorsement.

The £85 course fee and what I imagined to be four hours watching back-to-back road safety videos in the dubious company of boy racers seemed a reasonable price to pay to keep my insurance costs low and my licence spotless.

It turns out I had a much better deal than I'd anticipated. As did the other 29 individuals who had made the same decision as me and attended this particular course.

Not only did the four hours speed by (within the safe and regulated limit of course) but I actually drove away (carefully) from the session feeling like I'd learned something. Granted, some of it was a Highway Code refresher course, but there's a message, attitude and methodology that leaves you feeling like you haven't wasted half a day.

Mercifully it's not a disciplinarian hand-spanking exercise. Never at any point did I feel patronised or made to feel like I was nasty, law-breaking scum. The tutors running the courses are not the police and, (as they constantly remind you) they are there simply to educate and, hopefully, reduce repeat offences.

And props to them; this is a huge task. Reduce repeat offences doesn't mean reducing 'getting caught again' – this actually means not speeding again. Ever. The cross section of my fellow course members reflected the endemic culture of speeding in society; a nurse, two solicitors, a builder, two students, three salesmen, several pensioners, a boy racer, and a freelance journalist. Each one of us pushed for time, constantly rushing, trying to squeeze more into our days. Can we really be persuaded that cheeky a 35mph in a 30mph zone, or an 80mph on the motorway is a no-no in the space of four hours? Well, erm, yes.

They grab your attention impressively quickly. No crackly old road safety videos or long drawn out introductions; just an ice breaking quiz on the Highway Code. And unless you're a driving instructor, or just passed your test, you'll realise how much of the original theory you've forgotten since scoring your licence. Sure, all 30 of the class could drive a car, but when it comes down to the nitty gritty of reading the road and knowing the signs (or lack thereof in some instances), you'll be surprised how rusty you become. A neat leveller, it takes the wind out of your 'know-it-all-don't-want-to-be-here' sails a little and opens the ears for what's to come.

The next step is to list every possible excuse you could give for speeding. We tried everything from emergency (possibly the worse time ever to drive as you're far too distracted to drive) to other road users (pull over, let tailgaters and road ragey types move on, you're better than them) to being car-jacked by zombies (such a rare event it's not worth considering). It's humorous, it's engaging, it's a good way of realising every possible excuse for speeding is as lame as an Eastenders plot twist.

As the course moves on it progresses to the consequences of your actions. No matter how well you think you can handle your vehicle at higher than recommended speeds, it's the myriad factors in every roadside scenario that you can't control. We're given two-second tests to see how many things we can spot in a picture... The same amount of time you usually glance from each window before driving onto a road. On average we saw about 10 per cent of what was actually there.

Videos and photos of road scenes with group, individual or whole class questions. Each scenario and stage is delivered in a different way to keep your interest, each one offering more reasons why speeding really isn't on. A dog running out into the road, a car eking out from a parked position, two old dears taking up the pavement, forcing fellow pedestrians to walk out in your path; appropriate speeds, considerate road use and defensive driving will allow you time to negotiate these obstacles successfully and with much less stress.

The tutor ends with one final fitting perspective. He describes three scenarios; all the same road and the same speed (driving 40mph in a 30mph zone). In scenario one we get away away with it. In scenario two we caught snapped by a mobile police camera. In scenario three we hit a child who's run out on to the road. In perspective, getting caught by the traffic fuzz really isn't unlucky at all...

I'm willing to bet that very few of my course mates sped home after the course. And I'm going to try my best to stop speeding from now on, full stop. But will humans ever stop breaking this particular law?

“It will happen,” the tutor told us. “When I passed my driving test 30 years ago it was absolutely fine to drive to a pub, have a few drinks and drive home. These days that's really not socially acceptable at all. That's the attitude we want towards speeding. And it is happening over time.”