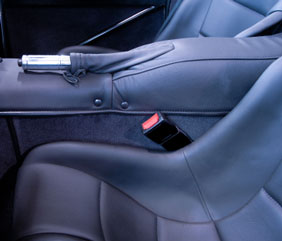 The heated seats might have cost a bit, but Phil and Sharon reckoned they made all the difference on those cold, windswept evenings

Heated leather seats are a relatively recent addition to the multitude of options that spec-hungry motorists can plump for when buying a new car, and have become de riguer on plusher models.

If you’ve not tried them before, they’re an…er, interesting experience, rather too redolent of feeling like one has soiled oneself or accidentally sat on a steaming hot 21” meat feast pizza. What’s more, they use fuel like billy-o and usually cost a fair bit to add as an option.

Now, in countries where the mercury plummets to less than zero throughout the winter, the prospect of toasty seats to warm a chilly posterior might make sense – but over here, where the weather comes in varying shades of ‘meh’, it seems that they’re one pricey option that drivers would quite happily do without. 71% of the 21,202 drivers quizzed by the AA in a recent survey reckoned they were quite happy to put up with a nippy bum during the winter months and do without heated seats.

Marginally less people (70%) couldn’t be doing with electric parking brakes, preferring the satisfying tug-and-clunk of a bog-standard one.

Other gubbins which motorists were largely happy to do without included electric seat adjustments, Xenon headlights, builti-in sat navs and cruise control. Useful stuff which motorists would like to see included two (yes, two!) reversing lights and a thermometer.

Elsewhere, the AA’s research that women are more willing to sacrifice comforts like air conditioning , passenger windows and parking sensors than men.

AA’s patrol of the year, Andy Smith said: "While customers benefit from the savings that the manufacturers can pass on by removing some of these features, our members tell us it's gone too far on some models and they want practical over frills.”