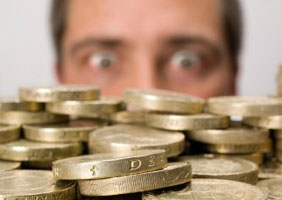 There really is no such thing as free money. But cashback credit cards might just be the next best thing. That is, if they’re used correctly.

Cashback credit cards allow users to earn money on purchases they make. You're not likely to make earth-shattering sums, but depending on terms and usage, it could be enough to come in handy come the summer holidays or Christmas time.

Competition in the market is heating up. At the beginning of September, Sainsbury’s launched a card with a tantalising 5% three month introductory rate, only to be trumped by Barclays, which is launching a practically unheard of 6% offer on September 28th.

Increased competition usually means good news for the consumer, so let’s have a look at some of the options on the market right now…

With a stonking three month 6% offer, money ‘heads’ reckon that the Barclays cashback card has the potential to be a market game changer and at the moment, it’s introductory terms can’t be touched by any other cards.

But, as always, there are a few catches. Once the three month 6% offer is up, the card reverts to a rather less impressive 2% rate, although for one month of the year the card will revert to 4% cashback terms.

To qualify for the 2% terms need to make at least 15 purchases on your card, or face reverting to a barely-worth-it 0.5% rate. It might end up being quite galling if you made a massive purchase –  say for a telly, holiday or something – only to find out that you’ve not made enough smaller buys and then get a trifling amount back.

There’s also a £24 annual fee for the card – big spenders will have no problem turning a profit on this, but the fee might well put off a lot of customers.

Like the Barclays card, there’s an annual fee for the privilege of American Express’s cashback card; £25, since you ask.

For this, you’ll get 5% cashback on the first three months you’ve got the card, with a £100 ceiling. After these terms are up, you’ll revert to a 1.25% cashback rate on all spending, with no cap. For one month a year, that’ll rise to 2.5% - allowing you to fill your boots, should you want to.

Snapping at the heels of Barclays’ impressive 6% card is Sainsbury’s 5% number. But you’ll only get cashback on only purchases you’ve made at Sainsbury’s stores. Oh, and the introductory cashback limit is capped at £50. So, er, yeah, not quite so impressive when you think about it.

On the plus side, the card is free and there’s a £5 cashback reward each month you spend at least £250 in Sainsbury’s and £250 elsewhere. Possibly worth a punt if you do the majority of shopping at Sainsbury’s, but if not, you’ll have to buy a heck of a lot of Taste The Difference pork pies to make it worth your while.

One of the big advantages of this bad boy is that it’s absolutely free to have, and offers a none-too-shabby 3% flat rate of cashback. But here’s the rub – your cash back limit is £100 a year, and you’ll have to spend £3,333 to get that.

Like the Aqua card, you won’t have to pay for Capital One’s Aspire World number. It doesn’t have a spending limit, and you’ll get a meaty 5% rate on the first three months. After that, things aren’t quite so meaty. About 1.25% cashback will be the best you’ll be looking at, and even that depends on how much spending you do on your card.

There’s a £24 annual fee in store if you want to take advantage of Santander’s card – probably not an issue for cash-rich jetsetters like Lewis Hamilton and Jenson Button, who plug the card for Santander. It differs a little from the others because of its tiered terms.

They go a little something like this: you’ll get 1% on supermarket spending, 2% in department stores, and 3% on petrol or train fairs, although the latter is capped at £9 cashback a month. Hence, the ‘123’ tag.