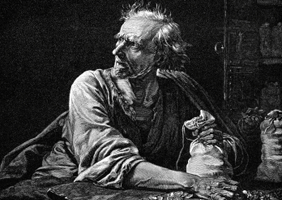 Bruce was an insufferable tightwad

“However rich I may have been, I have always lived like a poor man” Michelangelo

We all know someone who’s reluctant to put their hand in their pocket when the bill arrives, or somehow never quite gets around to stumping up the petrol money they promised, but you know, times are tough for everyone. Not the case for this minted and miserly bunch, who guarded their savings so closely they make Ebenezer Scrooge look like Santa Claus...

Widely considered to be one of the greatest artists of all time, Michelangelo (creator of the Statue of David) was highly-respected during his lifetime, accepting many commissions from influential and wealthy figures within Italian high-society.

But Michelangelo never flaunted his success. He was uninterested in the fine food and drink surrounding him at court, preferring to eat out of necessity rather than pleasure, and was rumoured to sleep in his clothes and boots, reportedly telling one of his apprentices: “However rich I may have been, I have always lived like a poor man”.

A Baron of the Holy Roman Empire, d’Aguilar’s marriage in 1756 bought him a dowry of £150,000, a sum which increased after he succeeded his wealthy father in 1759. For a time he lived in luxury, but eventually became known for his miserly and eccentric ways, giving up his properties and providing so poorly for his cattle that his remaining land became known as ‘Starvation Farm’.

Despite his stinginess, he left his children a fortune of £200,000 hidden throughout his home.

In a case of fact turning into fairy tale, the story of Yossele the Holy Miser is now well-known Jewish folklore.

Reviled in Krakow for his stinginess and refusal to give to charity, upon his death Yossele was given a pauper’s burials out of spite by the local townspeople, angry at his selfish ways. And yet, within a week of his death, the town’s poor were up in arms because their weekly allowances – donated by an anonymous benefactor – stopped arriving. Guess who had been responsible for those? He was swiftly renamed ‘Yossele the Righteous One’.

Mystery surrounds this pair of brothers even to this day. Homer Collyer and Langley Collyer became famous in Manhattan for their bizarre eccentricities and compulsive hoarding. They were rarely seen in public, preferring to stay in the booby-trapped home they shared in Harlem, but occasionally venturing out at night to forage for food in bins or for abandoned junk that piqued their interest.

The brothers lived in squalor, and would heat their house with a single kerosene lamp, but in 1942 when the pair found themselves in trouble for refusing to pay their mortgage, Langley wrote a cheque for $6,700 ($95,000 in 2012), paying off the entire mortgage on the spot.

Following their deaths, the brothers’ estate was valued at $1,084,500 in today’s money – hidden, no doubt, under the 130 tonnes of junk that the pair were hoarding in the house.

Born into a prosperous family, John Camden Neild inherited £250,000 in 1814 – about £12m today – but no-one could tell he was a rich man because of his increasingly eccentric, miserly behaviour.

He would wear ragged clothes and shoes with holes in them, then accept money from charitable people who mistook him for a vagrant. He would ride on the outside of a stagecoach – even in freezing conditions – because the fare was cheaper than riding inside, and, despite his large house in upper-class Chelsea, was rumoured to sleep on the floor, as he was so averse to purchasing furniture.

Founder of the blue-and-yellow homeware Mecca IKEA, Ingvar Kamprad has a net worth of $6bn ($33bn back in his financial heyday of 2007).

But despite his enormous wealth he’s widely-regarded as something of a skinflint: he drives a 19-year-old banger, demands IKEA employees write on both sides of a piece of paper, recycles tea bags and allegedly pockets salt and pepper packets at restaurants.

He’s also been known to visit IKEA for some cheap nosh. Their meatballs are mighty tasty though, so who can blame him?

London-born Nollekens was an 18th-century sculptor and antiques restorer, popular and well-liked among his social circle – odd considering his miserly ways.

He would smuggle stockings, gloves and lace inside hollow busts, and would deliberately model his sculptures in such a way as to use only the smallest pieces of marble. He would only light or heat his home if guests came to visit, and was known for filling his pockets with salt and pepper while dining at the Royal Academy.

His wife was just as bad, though, allegedly trying to trade in the handle of an old mop when buying a new one. When Nollekens died he left a fortune of £200,000.

Englishman Daniel Dancer came from a long line of misers, so was well-versed in thriftiness. Despite inheriting £3,000 (a considerable sum in the 18th century), Dancer rarely bathed, wore clothes until they were ragged and once – allegedly – used a partly decomposed sheep for two weeks’ worth of dinners.

His redeeming feature was his love for his dog. But, fearing a costly lawsuit if it attacked anyone, he had its teeth removed!

Believed to be the inspiration for Dickens’s character Ebenezer Scrooge as well as John Scarfe in Ainsworth’s novel ‘The Miser’s Daughter’, John Elwes was an 18th-century MP in Berkshire, also known as ‘Elwes the Miser’.

Despite inheriting huge sums on two separate occasions (well over £15m in today’s money), Elwes would wear ragged clothes, walk in the rain, eat mouldy food and, on one occasion, ate a moorhen a rat had dragged from a river.

It’s said that he and his uncle would spend evenings lambasting other people’s extravagant lifestyles, all while sharing a single glass of wine.

Nick-named ‘The Witch of Wall Street’, Hetty Green was a shrewd businesswoman with a nose for investments and a cool head for stocks and shares.

In 1864 she inherited $7.5m (about £107m in 2010), but barely touched it, relying on her own banking prowess instead. That, and an extreme stinginess, helped earn her a place in the Guinness Book of World Records as ‘World’s Greatest Miser’.

Allegedly she never turned on the heating or hot water, never washed her hands, constantly wore one old black dress which was only ever washed at the hems to save on soap, and apparently spent an entire evening searching her old carriage for a lost stamp worth two cents.

The most outrageous tale of her thriftiness, though, is surely that of her son and his broken leg. She initially refused to pay for medical treatment, resulting in a condition that later required amputation!