Is gambling a growing problem for women? 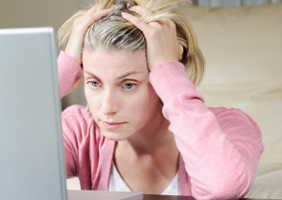 Online gambling is increasing in prevalence

“One day after betting for about 12 hours straight, I was nearly £9k up but did I stop? No, of course I didn't."

Online gambling has taken off in a big way and that’s why it’s suddenly all over our TV screens too – it’s a boom industry, despite the sluggish wider economy.

For most people, it’s a bit of harmless fun and a way to enjoy themselves without leaving their homes. However, for some it becomes a life-changing addiction.

And as more gambling sites target female customers, there’s been a corresponding rise in the numbers of women battling gambling addictions.

In fact, the National Centre for Social Research is so worried about the growing numbers of women developing problems that it raised its concerns with Parliament.

The think tank told the Commons culture select committee: “We see more women and older people becoming involved with gambling and an increase in the proportion of people who gamble regularly.

“The latter is particularly important as higher levels of gambling involvement are associated with problem gambling.”

So are women paying the price of an explosion in online gambling?

The problem of problem gambling

Like any addiction, problem gambling soon spills over into every aspect of the victim’s life. For men and women, that can mean it soon affects their jobs, their families and, of course, their finances.

Just look at any of the gambling addiction communities online and you’ll see plenty of women sharing stories about their addiction. A significant number admit that gambling online is what dragged them into their problems.

Posting in the Gamblers' Anonymous Forum , a mother of two young children admits she’s maxed out two credit cards and taken out a loan without her partner knowing, blowing the lot on online gambling.

She writes: “I have no interest in bookies or casinos. It’s an online addiction and no matter how mad and down I am with myself, I just can't say no.”

Another woman says that it’s the online aspect that makes it harder to put her spending in perspective: “It's like it's not even real money it's just numbers on a screen. Before I know it, I've spent loads.”

For non-addicts, the compulsion can be hard to understand. Writing in the GameCare forum  , one woman tries to explain the hold her addiction had on her.

“One day after betting for about 12 hours straight, I was nearly £9k up but did I stop? No, of course I didn't. I just kept on going because it wasn't enough and I realise now that nothing will ever be 'enough'. Once I had lost that £9k I proceeded to lose another £30k in under three months!”

Is gambling a growing issue for women?

For many years, gambling has been seen as a peculiarly male problem. Bookies and racetracks have become far more female friendly, but the majority of the clientele remain male.

However, the web is now filled with gambling websites, including many that deliberately target women with their advertising and sense of community. So has this led to a rise in women struggling with gambling addictions?

Dr Neil Smith is a Principal Clinical Psychologist at the National Problem Gambling Clinic. He says it’s hard to be sure about numbers as a high proportion of women don’t seek help.

In his clinic the number of women seeking help hasn’t risen in recent years, but that’s potentially because of the perceived stigma.

“Since opening in 2008 around 8% of our referrals have been from female problem gamblers, when research would suggest that the proportion of problem gamblers who are female would be around 25%,” he explains.

Certainly there seems to be a greater shame when a parent succumbs to a gambling addiction. One mother of two says she spent all the family savings through online gambling, as well as maxing out a number of credit cards, and simply adds: “I cry when I think what I could have bought me and my kids with that money.”

Finding help for a male problem

Part of the problem for women problem gamblers is that the vast majority of their fellow addicts are male, and some say that puts them off seeking group support.

The National Problem Gambling Clinic aims to overcome this by offering sessions specifically for women.

Dr Smith explains: “To attempt to encourage women into treatment we have established a female only group for problem gamblers, run by female psychologists…

“Women report being put off attending existing supports, such as Gambler's Anonymous, by the fact that these groups are predominantly male.  Our group allows for a female only environment that allows for the discussion of specific difficulties faced by female gamblers, whilst also learning techniques to reduce their problem gambling.”

The clinic now even provides childcare to help busy mothers access its services.