Pet insurance – what you need to know 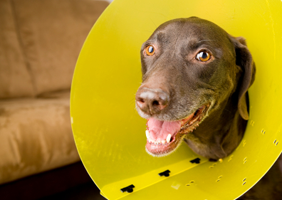 "Like any form of insurance, pet insurance is an exact science calculated on a case-by-case basis"

My family has had three family dogs. The first was about as active as the UK’s housing market at the height of the recession.

The second was an athletic - yet never reckless -Retriever. The third (still living) has, in order: nearly drowned in a pond; eaten a whole pack of paracetamol; chewed through a cork and drank a full bottle of wine; and attempted to consume a four-pack of batteries (fortunately, ever ready, I managed to claw said batteries from its throat).

Unsurprisingly, we did not really think about dog insurance until dog number three. The first two had cost us only what they ate and the occasional vaccination jab, yet Ally, a glossy black Labrador, had racked up veterinary bills topping £1,000 in her first year.

Ally’s previous, of course, meant that insuring her was a bit like trying to insure a 17-year old male with 9 points on his licence and an extensive accident history on a BMW 5 series. Like any form of insurance, pet insurance is an exact science calculated on a case-by-case basis.

“There are a number of factors that can affect pet insurance premiums such as the breed and age of the pet, the type of product selected and expected future veterinary fee inflation,” explains Natalie Sword from Animal Friends.

Yet paying anything at all seems a stretch too far for many pet owners, according to Sword.

“We estimate that over half the UK’s pet population is un-insured,” she reveals. “With every one in two households having a pet, that’s approximately 30m pets, so we estimate over 15m uninsured pets currently in the UK.”

That’s clearly a lot of pets to which a lot of expensive things can go wrong. And, obviously, not all those owners will be able to afford to take those pets to the vets.

“We see a lot of cases where animals that are either sick or injured have not received the required veterinary treatment, and have suffered tremendously as a result,” reports Andy Robbins of the RSPCA.

As a result, it’s not a surprise to learn that the RSPCA is firmly in the pro-pet insurance camp, explaining that it guards against “unexpected and often costly vet bills”. It advises that as comprehensive a package as possible be taken out, too.

“The better the policy, the more likely they are to protect themselves against larger bills,” says Robbins.

So finding the right policy for your animal is important.

Basic cover tends to insure against one-off injuries and short-term illnesses, while the most extensive cover can insure against anything that happens to that pet in its lifetime.

All policies will have a cap on expenditure both in total and for specific illness, mind, so ensure you read the fine print, and individual insurers will have their own take on what “lifetime” actually means. Animal Friends, for example, insures as follows:

“Our non-lifetime range (otherwise known as time-limited) is our entry level insurance which offers varying amounts of veterinary fees cover to choose from,” reveals Sword. “Lifetime packages offer longer term cover with a limit per condition that ‘refreshes’ annually, allowing you to claim up to that limit each year for that specific condition.”

Sword says that the most common ailments claimed for tend to require long-term care. “The most common claims tend to be related to lameness and skin disease and therefore medication or continued treatment is required,” she says. “Depending on the medication required this can often costs hundreds, even thousands over the course of the treatment period.”

You’d be forgiven for thinking that these occurrences are relatively rare and that you’d be willing to take a gamble that if your pet was affected you’d probably be able to find the cash. But the RSPCA urges prospective pet owners to consider the total cost of ownership of a pet, as that can often be higher than people expect and so having the spare cash to pay for “rare” afflictions is unlikely.

For example, research from Sainsbury’s Pet Insurance last year found that the average lifetime cost of owning a dog was £16,900, while a cat came in at £17,200. RSPCA’s Robbins adds that certain larger animals will cost you even more. For example, some sources claim a horse can cost you around £95,000 over its lifetime. If you’re pet is unfortunate or reckless, these amounts will be significantly higher.

The cost of an insurance premium in that context suddenly seems much more reasonable. And the importance of ensuring no unexpected costs all the more vital.

Yet finding an insurer can be tough if you stray beyond the most popular pets. Animal Friends, for example, only insures domestic dogs, cats and horses. It is the same situation with many insurers.

Finding insurance for your snake, rabbit, budgie, bird of prey or the like can be trickier, but the likes of Exotic Direct are established players in the incresingly competetive exotic pet insurance marketplace.

And shopping about is key if you are to get a good deal. Pet insurance is a growing market and so comparing what is on offer is crucial to ensuring you get the right deal. Whatever you end up paying, though, Sword is certain that it will be more than worth the outlay.

“Pet insurance provides owners with a safety net should the worst happen,” she says. “We can all do our best to try and prevent injury but ultimately we can’t stop accidents from happening. Vets bills can run into the thousands very quickly depending on the treatment required and the extent of the repair. Pet Insurance helps cover these costs through small monthly premiums and a nominal excess.”