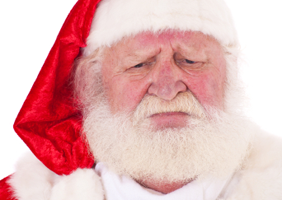 These songs are enough to drive even Santa to despair

Crimbo is a time of year which, on occasion, brings out the best in people.

However, it’s also a time prone to bringing out the very worst in the hit parade. Christmas Number ones come in all flavours of rubbish: There’s the sentimental. The sanctimonious. And of course, the relentlessly naff.

Here is, for my money, the very worst of the songs which claimed the coveted Christmas  number one spot. You may want to reach for the ear plugs now.

In 2009, a ‘subversive’ Facebook campaign started which intended to halt the dominance of (admittedly woeful) X-Factor songs which had clogged up the festive number one spot. And what better way to stick it to ‘the man’ than with the Californian rap-rockers’ profanity-laden 1992 hit?

The campaign succeeded in getting up Simon Cowell’s nose and kept that year’s X-Factor winner - Joe McElderry’s risibly poor cover of Miley Cyrus’ ‘The Climb’ - off the top of the charts. And, yes, it did raise a lot of money for charidee.

But we suspect the real winners in all of this were Sony Records board members, who were presumably laughing all the way to the bank. After all, Rage Against The Machine were signed to Epic, a subsidiary of Sony Records…which coincidentally, is also the company Cowell’s Syco entertainment belongs to. And anyway, a searing polemic funk-metal critique of American foreign policy and police racism in the early 1990s isn't very Christmassy, is it?

Back in 2000, Bob The Builder – a stop-motion children’s TV series about a cheerful tradesman voiced by ‘Men Behaving Badly’ star Neil Morrissey – was a massive deal amongst pre-schoolers.

Now, if there’s something which is guaranteed to fray the nerves of normally patient parents it’s an incessant novelty song derived from their children’s favourite TV program. 'Can We Fix It?’ was as catchy as a subtropical virus and inescapably popular, providing the soundtrack for millions of children’s parties.

The generation of kids who sent this to number one are now beginning to grow up. Hopefully now they will realise the severity of their actions.

‘Halleluljah’, which originally featured on perky Canadian troubadour Leonard Cohen's 1984 album ‘Various Positions’ is apparently one of the most covered songs of all time with a reported 2,000 renditions knocking around out there.

To be honest, Cohen’s bleak, sardonic, Old Testament-referencing ditty didn’t seem like the obvious choice for an X-Factor winner’s song. And this version – dripping in schmaltz, to put it kindly – can be filed firmly in the ‘missing the point completely’ section.

What’s incredible about one of McCartney’s most heinous post-Beatles musical crimes is probably how something so plodding and droning was able to sit resplendent at the top of the charts for nine weeks, becoming Britain’s biggest-selling single ever in the process. Nine weeks!

By 1995, Michael Jackson’s creative mojo was on the wane, and 'Earth Song' was him at his most bleatingly sanctimonious.  Just ask Jarvis Cocker, who bum-rushed Jacko’s show during a performance by the ‘In The Closet’ singer at the Brit Awards a couple of months after Earth Song had topped the festive charts.  “I was just sat there watching it and feeling a bit ill, because he was doing his Jesus act. I could see that there were a lot of people who thought it was quite distasteful,” he told Chris Evans on T.F.I Friday a few days after the event.

Many of us knew exactly where he was coming from.

We’re getting down to the real rubbish now, and Sir Cliff is a serial offender when it comes to the festive Number One spot – getting there in 1960 with‘I Love You’ and again in 1990 with ‘Saviour’s Day’.

However, it’s a real testament to Cliff’s powers of sheer awfulness that ‘Mistletoe & Wine’ isn’t even his worst tilt at a Christmas Number One – that dubious honour goes to 1999’s risible Lord’s Prayer/Auld Lang Syne‘mash-up’ the Millennium Prayer.

Sensitive, credible artist Matt’s dulcet tones spirited him to the coveted X-Factor crown a couple of years ago and his stab at number one– a cover of a ditty by the name of ‘Many of Horror’ by similarly sensitive, credible Scottish rockers Biffy Clyro – was an easy winner for the great British public who’d voted for him in their droves.

Thing is, it was rubbish- plodding, saccharine and overly sanitised – even down to the name,  changed from the original as it was considered a bit ‘edgy’ for British record buyers.

Alas, we’ve not heard much from Matt since – he’s ‘parted company’ with Simon Cowell’s Syco label, and has been banned from appearing on the show again – possibly because he’s taken every opportunity since to pipe off about how “he isn’t a puppet.”

Like nails running down a blackboard, even if the sentiment was quite sweet really. In 2009, the choir – who counted the actress Sally Lindsay – who played brassy barmaid Shelley Unwin in Coronation Street amongst them–  reformed for another shot at the Christmas Number One to raise money for age concern.

The song wasn’t any less rubbish, mind you.

Mr Blobby, for those who’ve managed to expunge him from their memory  or are lucky enough to be too young to remember, was a large, slightly sinister figure who resembled a novelty condom full of blancmange. He rose to fame on Noel’s House Party, an early evening ‘light entertainment’ vehicle of Noel Edmonds off Deal Or No Deal.

Back in the early 1990s, he was massive.“Watching Mr. Blobby at work, his green plastic eyes spinning maniacally, one has to wonder whether his appeal to this nation of Shakespeare, Milton and Philip Larkin isn't a bit more complex,” pondered a hifalutin article in the New York Times back in 1994, the height of ‘Blobbymania’.

As with all pop culture phenomena worth their salt, Mr Blobby had a shot at the Christmas Number One slot with a maddeningly awful song with a nursery rhyme medley, galumphing, flatulent bassline, a children’s choir, and of course, his customary ‘BLOBBY BLOBBY BLOBBY” vocals on the top. It also featured Jeremy Clarkson in the video.

Blobby eventually prevailed after an epic, see-saw tustle with Take That’s ‘Babe’ and annoyed millions of people in the process. In fact, he was decked by a man in 1994 as he’d made his daughter cry by dropping her birthday cake on the floor as part of one of his zany ‘stunts’. How many more Britons would have loved to have done the same?

Of course, the  greatest Christmas song ever – which wasn’t at all shameless, opportunistic or annoying – failed in its bid for the festive Number One in 2010. Have you guessed what it is yet?