Just who is Mark Carney? 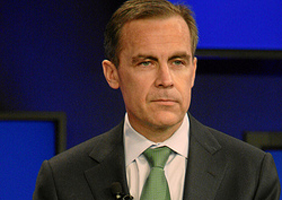 "a ringing endorsement from George Osborne, Ed Balls, Nick Clegg and David Cameron might be seen as a kiss of death by some"

Today, Mark Carney takes over the top job at the Bank of England from Mervyn King.

The talk is that Carney is an outstanding choice. His appointment has been trumpeted with approval by politicians of all stripes – although a ringing endorsement from George Osborne, Ed Balls, Nick Clegg and David Cameron might be seen as a kiss of death by some.

We’ve compiled a need-to-know dossier on the man who’s going to have a big say on interest rates,loansandmortgages. Let’s hope the man who a former room mate once said “wanted to make his mark in public service” gets it right.

• Mark Carney was born in the vast, remote Northwestern Territories of Canada in March, 1965. It’s an area which covers over half a million square miles but has a population of under 42,000 people.

• At the age of six, Mark moved to Edmonton, in Alberta, where his father went to work as a high school principal.

• Like a lot of Canadians, Mark is a big ice hockey fan and played as a goalie during his college years.

• He’s a big fan of Coronation Street, and his favourite character is busybody shopkeeper Norris Cole*.

• He’s got two brothers – one older, one younger – and a younger sister.

• His education took in two of the most prestigious academic institutions in the world – Harvard in the USA, and Nuffield College in Oxford, where he took time out from his career to study for a doctorate in economics in the early 1990s.

• He’s been praised for his work raising money for poorer students to attend the expensive Oxford college which he attended – which costs between £18,000 and £20,000 a year for foreign students.

• Speaking of Oxford, that’s where he met his British wife, Diana. She’s quite ‘in’ to social and environmental causes and has gone on record to say that global financial institutions are “rotten or inadequate”. Which must have made for uncomfortable conversation over tea that night.

• She’s also expressed sympathy for the bank-bothering Occupy movement in the past, and runs the webstite Greenproductsthatwork.com.

• In 2011, Mark won the Readers Digest ‘Most Trusted Canadian’ award. Who's the most untrustworthy? Well, disgraced former publisher Conrad Black must be in with a shout. Even his name sound villainous. Either that or Alanis Morissette, who was instrumental in selling a bogus definition of 'irony' to the world.

• Mark’s favourite meal is boiled beef and carrots, washed down with a bottle of Ruddles County Ale*.

• Mark’s done his fair share of globetrotting in his career– he spent thirteen years at global uberbank Goldman Sachs with stints in London, Tokyo and Toronto, taking the mantle of several high-powered positions.

• He joined the Bank of Canada in 2003, and got the top job there in 2008. By all accounts, he did rather well, and has been credited with steering Canada out of the path of economic crisis.

• No Canadian banks had to be bailed out by the government during the global recession during his tenure.

• George Osborne has described him as “the outstanding banker of his generation,” which given the events of the past few months and years, isn’t really saying a lot, is it?

• He’s a big fan of the hard rock band AC/DC, and likes nothing better to unwind than donning an outsize schoolboy uniform as worn by his idol Angus Young and 'duck walking’ around his plush Ottawa home, playing air guitar to hits like ‘Ballbreaker’ and ‘Let Me Put My Love Into You’.

*The Money Shot has yet to verify these reports. However, we have it on good authority from a bloke called Vernon from down the Butcher’s Arms last night.