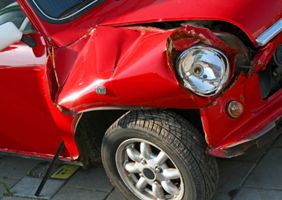 On second thoughts, Tony probably should have declared that Doomwoofer 3000 sound system and performance kit to his insurer

Do you know what assumptions your insurer makes? Do you assume your cover includes something without checking? You risk leaving yourself unprotected.

Well, maybe not a great author, but a pretty damned good one – that’s Lemony Snicket in the children’s story ‘The Austere Academy’.

The point is particularly valid in the world of insurance; making even a small incorrect assumption risks invalidating your entire policy. And many people don’t realise their cover isn’t valid anymore until they come to make a claim – and can’t.

You’ll always leave the burglar alarm on. You’ve never had a conviction. Your car has no modifications. Does your insurer assume these are true? Are they? Here are some of the assumptions that could get expensive…

Assumption number one: No criminal convictions

It might not seem remotely relevant, but insurers often need to know if you have any unspent criminal convictions.

Failure to disclose could mean your insurance is invalid, even if you’re up to date with your premiums.

Some insurers and price comparison sites have been criticised in the past for assuming that applicants have no convictions, unless the customer makes an effort to state otherwise.

The good news is that when you search for vehicle or home insurance through Gocompare.com, they always check.

When you apply for life insurance or critical illness cover, you’ll usually be asked a string of medical questions.

The insurer, fairly understandably, assumes you’ll disclose everything that’s relevant, so don’t be tempted to keep quiet about any health issues, even minor ones.

For example, there’s a sad case in the papers just now of a man who died, only to have his life insurer refuse to pay on the grounds that he hadn’t disclosed he suffered pins and needles.

His cause of death was entirely unrelated to the pins and needles, and his family have launched a campaign to overturn the insurer’s decision. But it does illustrate how vital it is to be entirely open about any health issue, no matter how mundane it seems.

Assumption number three: If you have a driveway or an alarm or a garage, you’ll use it

Think very carefully about the information you provide an insurer with. If you reduce the cost of your home insurance by declaring that you have a burglar alarm, then the insurer will assume that you use it.

If you make a claim and it emerges that you didn’t bother switching it on, or didn’t turn all the locks, you could find yourself in difficulties.

Likewise, if you have a drive or garage then you may have reduced the cost of your policy by stating that the vehicle will be kept off road at night. If you’ve said you will then make sure you usually do – otherwise you’re not keeping your end of the bargain.

When it comes to contents cover, your insurer will assume that you’ve opted for the right amount of protection. But if you haven’t, you’re running a bigger risk than you may think.

Imagine a house where the possessions are worth £40,000, but the insurance is for £20,000-worth of stuff. That house is then gutted by a fire and all the contents are ruined.

An insurer will not necessarily pay out £20,000 just because that’s the limit of the cover. In fact, they may decide that the homeowner only had half the protection they needed, and so only pay out half of the policy - a maximum of £10,000.

Going underinsured can be even more expensive than you may realise.

Once you’ve bought your policy, your insurer continues to make assumptions – this time about how you’ll behave. These will all be in your small print and it’s essential to read them carefully.

If you don’t know what those policy restrictions and need to claim, you could find you’ve failed to keep to your side of the bargain.

For example, at least one ski insurance provider requires policyholders to wear a safety helmet on the slopes. If you fail to do so and have an accident, you could find the insurer refuses to pay out, even if your injury has nothing to do with your head!

Whatever insurance policy you’re buying, take a few moments to read the small print. Don’t assume you know what an insurer will deem acceptable – that’s one of the most dangerous assumptions you can make.

Of course, insurers make a fair number of assumptions when pricing your cover too.

For example, they will assume that a high-powered sports car is more likely to be involved in an expensive incident than a city car or micro-car.

You can protect yourself from nasty surprises by checking prices out before you buy a new car. Use the Gocompare.com car insurance comparison tool to search for the specific vehicle you’re considering and you’ll be able to see whether you can afford to insure it.

After all, it’s very depressing to pay £1,000 for a car only to discover it’s in a high risk insurance bracket and will cost £2,000 to insure. That’s especially true if you only work it out once you’ve already bought the vehicle.

Every insurer is different and each one is happy with different levels of risk. That means that assuming your new insurer will have the same rules as your last can be an expensive mistake.

Take the time to read through all your insurance paperwork, so that you know what you need to do in order to keep your cover valid.

Insurance is definitely an area where assumptions can make you feel like a bit of an ass.