Tax return not done yet? Best get a move on 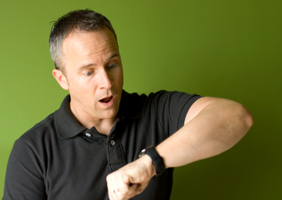 "Blimey! Is it nearly January 31st already?" exclaimed Roger, before making a frantic phone call to his accountant

"there about another 2.2 million returns outstanding as of this morning"

Millions of self-employed people have already sent their tax returns neatly off to HMRC HQ.

However, for those who haven't, the rush is on to get them in before the January 31st deadline. Failure to get them in on time means a £100 fine, and that's just for starters. Nobody wants that, do they?

As of this morning HMRC says it has received over 8.5 million returns in total, in both old-school paper forms and online returns.

It claims to have received nearly 300,000 returns online yesterday alone. This means that there are about another 2.2 million returns outstanding as of this morning.

The good news is that if you haven’t done it yet and stuck it in the post you can do it all online. The bad news is that you’ll have had to have registered for it by January 21st, meaning that you’re really going to have to get it in tonight’s post, first-class if you want it to arrive by deadline day.  If you want to make doubly sure, think about sending it with recorded delivery. This means you’ll have evidence to back up that you sent it before the deadline, too.

So, now is the time to pull up a chair, pour yourself a steaming cuppa, stop procrastinating and do your form – it shouldn’t take much more than half an hour. Finding all the stuff you need, however, might take a bit longer...

Filling in tax returns online has made things quite a lot easier, and it's certainly proved popular - last year, nearly 90% of tax returns were completed in this way.

But it doesn't mean that problems don't arise. Here are the most common issues which present themselves when filling in the online form, from the HMRC itself.

A blank page is displayed when trying to view online statements

"A few customers have had problems when trying to download PDF forms from their online accounts," says HMRC spokesman Patrick O'Brien. "There is easy to follow guidance available on the HMRC website Service Issues page, accessible via the HMRC home page under ‘News and Updates’."

If a customer inputs ‘£0’ or ‘£0.00’, then they will receive an error message. The HMRC advises that they have not received any income for that field, the amount entered must be greater than 0 (zero) or blank.

The customer has to provide details of their pension provider in a box on the return. But this box does not accept punctuation or the ‘return’ key. "Often customers use punctuation or hit ‘enter’ and they then receive an error message. Customers should press the 'Ctrl' key and letter 'A' which will highlight the contents of the box, then re-type the text and avoid using punctuation or the return key," is the advice from HMRC.

‘Any Other Information’ box

These boxes have character limits (including spaces) and a generic error message is received warning them that someone may have altered their return when too many characters have been entered. "Customers should reduce the text and try again," says HMRC.

Ex-pats filling in their tax returns may have been confronted by an error message when they try and put their address wherever in the world they are. This is because the system doesn't recognise foreign postcodes - it's not a mandatory field, so leave it blank.