A fifth of people don't know what one of these is 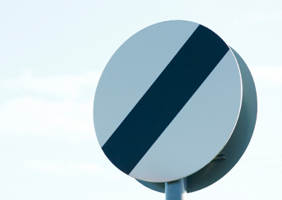 A fifth of people think this means 'no entry'. The mind boggles.

Research from Co-operative Insurance has suggested that a fifth of motorists think that the National Speed Limit sign – that design classic of a white circle with a black diagonal stripe running across often found on Britain's motorway network – as a ‘No Entry’ sign.

Meanwhile, a third of the motorists surveyed by the Co-op didn’t recognise the ‘No Stopping’ sign. Here it is, in case you were wondering.

In other statistical nuggets gleaned from the same Co-op survey, a quarter of drivers check their phone for texts, a tenth check Facebook and Twitter and a tenth wear headphones when they drive.

Elsewhere, some research commissioned by this very parish revealed that half of UK motorists would back a drink drive limit of zero for young drivers, and around 40% would back compulsory telematics car insurance for new motorists

Other wing-clipping measures for young drivers which were popular amongst the 2,000 drivers quizzed by Gocompare.com were giving police powers to issue instant short-term bans to reckless new motorists, and a limitation on engine size restrictions until they reach a certain level of experience.