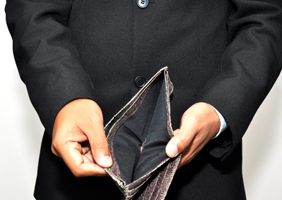 Is dignity a price worth paying?

"some cardholders have suffered abuse from checkout staff, while others have been embarrassed because their shopping is rejected if it’s just a penny over the card’s balance"

People receiving social security benefits shouldn’t be paid in cash, but instead be given prepay cards. That’s according to a new report from the thinktank Demos.

It says that this would reduce the administrative cost to the state, as well as helping recipients learn to budget and avoid debt.

The thinktank’s recommendations echo those of Alec Shelbrooke, a bankbench Tory MP. Last year, he called for the introduction of a welfare cash card, which restricts spending on non-essentials such as alcohol, cigarettes and gambling. His idea was that the cards should be programmed to only allow for essentials such as food, clothing and heating.

And there’s growing support for this idea. A poll conducted by Demos showed that 59% of the public support some form of state control over how benefits are spent, even more so when it comes to limiting spending on gambling and drugs.

But would prepay cards work? To find out, I’ve been taking a look at the existing prepay benefits system operating in the UK – the Azure card.

If a foreign national seeks asylum in the UK and is rejected, it may not be immediately possible for them to return home. Perhaps they have a medical condition, or travel isn’t safe. Whatever the reason, they can’t be left destitute while they wait.

So under section 4 of the Immigration and Asylum Act 1999, the state issues these claimants with accommodation and an Azure payment card.

Each week that they remain in the UK, this prepay card is loaded with £35.39, but it can only be spent on limited items such as goods and toiletries. It can’t be used to withdraw cash, buy gift vouchers or purchase fuel.

Many refugee support groups are campaigning against the use of these cards, particularly as some recipients are stranded in the UK for years after their asylum bid has been rejected.

They report that some cardholders have suffered abuse from checkout staff, while others have been embarrassed because their shopping is rejected if it’s just a penny over the card’s balance.

Analysis from the Refugee Council found that more than half of cardholders felt anxiety and shame when they used their card. Not only that, but 60% had experienced the card not working, while others had been refused service at participating supermarkets.

Refugee Action reports that the supermarkets themselves can assess what they deem to be essential purchases, leading to one person being refused a pair socks and carton of orange juice because they “weren’t essential”.

Maybe you don’t care too much if people receiving benefits are embarrassed to use the card. After all, it’s meant to be a safety net, not a comfortable option.

However, there are some real issues with the way the Azure system is run. If this system was to be rolled out for all social security benefits then it would need huge change or risk widespread hardship.

For example, it is often far cheaper to buy fruit and vegetables at local markets than at the big chain supermarkets. But these existing prepay cards only work at certain retailers, so the users can’t shop at the cheapest places.

Azure card users who still have a balance on an Azure card at the end of the week can’t save that money; just £5 can be rolled over to the following week.

If that system was copied for all benefits claimants then the users wouldn’t be able to save up for big purchases or to bulk-buy items. That wouldn’t teach budgeting skills or the value of savings.

Of course, some of these issues could be fixed if the cards were to be rolled out more widely. But questions still remain about how useful and even how ethical restricting spending might be.

It’s easy to see why restricting benefits spending is appealing – no one wants a heroin addict to buy drugs instead of milk for her children.

But even if prepay benefits cards worked universally, many people would feel humiliated by using them. And without some cash in the system, this could be a change that stops claimants from catching a bus, making a phone call or buying nappies from their local corner shop.

What do you think? Could these issues be ironed out if the cards were rolled out more generally? Should benefits be issued via a prepay card? Should they be restricted? Share your thoughts with us by tweeting @covered_mag.