The only way is ethics? 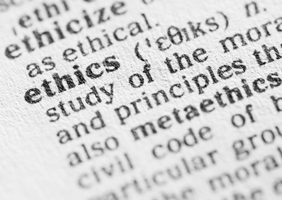 What does it mean to be ethical?

"the very nature of ethical funds excludes certain assets and reduces the options. An ethical fund manager must work harder than his non ethical counterpart"

It was Jesus, arguably  the world’s first hippy, who first drew the distinction between wealth and goodness.

Ever since he compared a rich man’s chances of reaching heaven to forcing a camel through a needle, the notion has persisted: you can be good or you can be rich; you can’t be both. But now, as another long haired radical once said, the times, they are a changin’.

Recession or no recession, consumers expect to get what they want, and increasingly it seems they are looking for products which fit in with their moral sensibilities. The last ten years have seen real growth in areas such as organic food and fair trade with people willing to actually pay more for goods which are ethically sound.

From the point of view of the business world this means that ethics have value, so it wasn’t long before the financial world got in on the act. Here are just a few of the ways in which you can find more ethical options for finances.

Whether they’re supporting repressive regimes, mis-selling payment protection insurance, or awarding themselves vast bonuses, banks have revelled in their position of pantomime villain.

As customers we may hate them, but we seldom take our business elsewhere – largely through the perception that they’re all as bad as each other. However, there are signs of change.

Of the High Street Banks, Co-operative Bank makes much of its ‘ethical bank’ credentials – even if its hands were far from clean in the PPI scandal.

Its ethical policy gives customers a say in where their money is invested, avoiding companies involved in the shadier world of business such as fur, weapons or repressive regimes.

In terms of actual products, though, you’ll notice little difference. Co-operative’s range of services appear to be as good, bad or indifferent as most of the others. Their one year fixed-rate savings account, for example, looks every bit as anaemic as all the others at a measly 1.62% AER.

There are, though, a few people trying to create an alternative way of doing business. Last year a Channel 4 documentary followed the story of Dave Fishwick, an entrepreneur who set out to create a people’s bank.

His company, Burnley Savings and Loans, may not technically be a bank, but it can issue loans and provide savings accounts. Any profits go to charity, borrowers receive a face to face meeting rather than a credit check, and savers get a nice 5% interest rate – it’s a very different image for how a bank can be.

Another option many people are taking is to cut out the middle man and do the banks’ jobs for them. Social lending sites enable you to lend directly to people and receive the interest when the loan is paid back. One of the leading sites, Zopa, promises a far above average rate of 5.4%.

The world of investments has traditionally been pretty hard-nosed, but even that is changing. According to recent YouGov survey, almost half of us now want some of our investments to be ethical, while 15% want them all to be ethical.

Investment companies have responded. Whether you’re choosing a pension, savings account or investment trust, you will probably be asked if you want an ethical or green option.

However, taking such green or ethical labels at face value is dangerous. At the tail end of last year Fair Pensions published a report outlining just how far many funds were falling behind people’s expectations.

The study found that the majority are not engaging with the companies they invest in to help improve companies’ behaviour, fail to update their ethical criteria and often invest in companies many would deem questionable. While avoiding areas such as gambling or the 'adult entertainment' industry, the report found that many ethical funds had a surprisingly open attitude to child labour or dictatorships. Transparency is also a problem, with 45% not publishing a full list of the companies they invest in.

There are good ethical investment funds out there, but you’ll have to do some research to find them. This begins with working out what kind of ethical investor you are.

Are you just interested in avoiding certain ‘bad’ companies, are you interested in a fund which complies with your religious goals, do you want to invest in green companies or those dedicated to making the world a better place?

There are a host of different funds out there which will meet some or all of these considerations, but in general they fall into several categories.

Light green investment (AKA the Diet Coke of ethical investments)

This is a passive form of investment, which simply avoids companies involved in certain sectors which are deemed unethical such as gambling, weapons, pornography or energy.

Best in class (AKA having your cake and eating it)

If you accept that energy companies (bad though they are) have to exist, you could try to champion those that behave the best by applying an ethical criteria. An oil company, therefore, could qualify for this fund if it pledged to invest in renewable energies.

Dark green investment funds take the business very seriously. They will probably have a dedicated advisory board, headed by experts in ethical investment, which carefully screens companies. These funds may invest in companies which are actively working to improve the world around them, such as those with particularly effective corporate social responsibility programs.

Marks & Spencer, for example, has a well-publicised commitment to becoming carbon neutral with its Plan A, while corporate giants such as O2 or Coca-Cola can often be found promoting social causes.

Barchester Green also regularly publishes a heroes and villains list championing those that walk the walk, while naming and shaming those which don’t.

So, can I make any money?

There is a line of thinking that investing ethically has reduced risks - but this is only a perception. An ethical fund is less likely to be caught out by a future version of the sub-prime crisis, or be fined by the regulator for bad practice.

But the same time, the very nature of ethical funds excludes certain assets and reduces the options for a fund manager. While it may be possible to be a successful ethical fund manager, they must work harder than their 'non-ethical' counterpart. Ethical funds tend to be invested in smaller companies, whose share prices fluctuate in value more than those of larger companies and therefore may make it riskier. It may be sensible to invest in ethical funds if you can afford to put money away for a period of years.

You can look at the past performance of an ethical fund – while this will not give you a cast iron guarantee it will serve as a good guideline.