Could drivers benefit from starting earlier than 17? 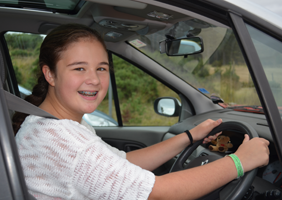 At just 15, Eloise has driven over 120 vehicles and counting

It’s a cold, crisp and bright February morning in the drivers' paddock of the historic Castle Combe racing circuit in Wiltshire.

Usually the track would reverberate to the sound of car and motorcycle club race meets. But today’s turnout is a lot...younger. Quite a lot younger, actually.

That’s because today is the first meeting of the 2013 season for the Under 17 Car Club, an organisation which has been giving kids from the age of 12 upwards the opportunity to get behind the wheel and gain hundreds – nay, thousands – of miles of driving experience before they’re even old enough to get their provisional.

Over 6,000 members have been through the club since its inception in 1976. Members meet at tracks and courses, predominantly around the Midlands and South of England, on 38 Sundays every year. The club maintains that its members are four times as safe as standard young drivers.

The last meeting was in November, and members and parents exchange greetings, hugs and smiles, having not seen each other since before the winter break. “Most members have friends here - it becomes a social occasion for them. A lot come every Sunday,” says Paul Clifton, a BBC transport correspondent and father of three, who visited the club seven years ago to report and was so bowled over he became heavily involved in the club and put his own three children through the course.

Eloise Peabody-Rolf, 14, from Portsmouth is a seasoned member, having started when she was 12. She’s currently at the organisation’s ‘Grade Two’ level – just a few rungs down from the exceptional ‘Grade One’ and the legendary ‘Grade X’ standards which not even the club’s most famous graduate, the late rally driver Richard Burns, could attain.

She’s been tasked with showing me the sort of skills that young drivers can pick up at the club in her dad’s BMW 5-Series Estate. By her own reckoning, she's "a little rusty” having not driven since November. But it’s not particularly evident, as she proficiently, smoothly and safely navigates her way around the two-way course set out on the track, as other alarmingly young looking drivers behind the wheels of everything from Fiat Pandas to Porsche Boxsters do the same.

By her own admission, she “wasn’t really into cars” when she first started at the club. But she’s now driven over120 vehicles and counting – including double decker buses, Aston Martins and American trucks.

“Most of my friends didn’t believe me when I first said I’d been driving cars on the weekend,” she explains. “But then they saw the pictures on Facebook…”

In for the skill

The Sunday meets don’t just entail driving around a circuit. When members reach a certain level of skill, they're let loose in Castle Combe’s skid pan facility to learn how to correct a dangerous slide. There are stunt days, where they are taught how to do donuts and J-turns by highly trained instructors - the club believing it's better for them to do it there than on housing estates and supermarket car parks later on. Then there are courses in First Aid and mechanics, too. And meanwhile, while members are off driving, their associates – parents or guardians – get classroom tuition and learn more about road safety themselves.

They even end up driving articulated lorries and double decker buses – the thinking being that if they realise how difficult it is to see things out of them, the more caution they’ll approach them with on the motorway.

They’re even taught about finding a reasonable car insurance quote when they pass – an increasingly tall order. Eloise is very conscious of the lack of savings which will be coming her way when she’s old enough to pass her test thanks to the ramifications of the gender ruling which came into force last year.

But thanks to a tie-in with telematics car insurance company Carrot, members can potentially enjoy big savings on their policies – by as much as 30% if they’re one of the super skilful drivers who get to ‘Grade X’ standard.

With the Pass Plus course long discredited, and insurers still not recognising achievements like having gone through the U17 Car Club or RoSPA accreditation, telematics - or 'black box' - car insurance might be the best way for precociously talented drivers to demonstrate their skills to insurers and prove they are safe cases. “It’s something I’ll definitely be considering,” says Eloise.

Sean Cronin is the Club’s chief instructor. By day, he is a chief inspector for Dorset Police. During his time in the traffic unit, he “got tired of scraping up the pieces of young drivers off the roads.” His involvement in the club came on account of a chance meeting, and like Paul Clifton, he became heavily involved in the organisation after seeing what the young drivers there could do.

“I can’t fathom how it’s legal for parents to go out on the public road with a 17 year old who’s never driven before,” he says, with a hint of exasperation. “How is it legal, or even appropriate - why can’t driving be on the school curriculum? Where is the CBT (the compulsory basic training for learner motorcyclists to undertake) for cars?”

It’s a view which Andrew Ross, a fellow parent and club trustee shares. “The DSA teaches people to pass a test. We teach people to drive. There’s a big difference.”

The vast majority of members pass their driving test first time – one recent graduate even managed to pass his without a single minor fault. “Some members are even criticised by examiners for being too confident,” says Cronin.

It’s apparent that club associates think that the high success rate of drivers who’ve been through the system is due to getting them learning at a younger age. “At 17, they’re not thinking about driving – they’re thinking about their A-levels, or getting a job, or getting a girlfriend or boyfriend,” says Ross. “At 12, they’re so much more receptive. And it’s a privilege to be able to drive a car then.”

But with places only for a few hundred members a year, there is only so much the Under 17 Car Club can do. Their activities are limited to predominantly the Midlands and South, even though they would like to franchise out their scheme - based around the police driving manual, Roadcraft. And while the annual membership fee of £300 is good value given the skills and expertise that members gain, there is the expense and time of getting to every meet – a huge commitment in time and money, particularly with petrol prices showing no signs of decreasing.

“The number of people being killed or seriously injured is on the rise again,” says head instructor, Shaun Cronin. “The statistics are as ‘good’ as they are because of technology – the standard of driving hasn’t actually got any better, but the government has let technology take the lead. Too many people believe a driving license is a right – a cultural change is needed.”

Do YOU think young people should be given the chance to drive at an early age? Should pre-license training be made compulsory? Let us know on Twitter or say hello on Covered Mag’s Facebook page, and join the discussion.