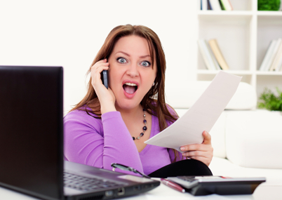 Dissatisfied with her service, Bernice got straight on the blower to the Financial Ombudsman (after lodging a complaint with the company in question first, of course)

I know I shouldn’t. I know it’s an abuse of my position. But it’s astonishing how quickly I’m passed to a manager, and how rapidly and easily my issue is almost always resolved.

But while I’m happy to have fixed my problem, this does really infuriate me. All customers should have their complaints taken seriously, and not just the ones who have a public platform.

Fortunately, in the age of the internet every customer has a potential public platform. So I’ve been thinking about how anyone can use the threat of publicity or perseverance to get a company’s attention.

Most medium and large companies now use Twitter and not just to publicise their products and services. Their dedicated social media teams are also monitoring for complaints and negative mentions, so that they can address problems fast.

Complaining via Twitter is like standing on the street corner and badmouthing their brand, so they will want to turn you back into a happy customer as soon as possible.

Quite often, it will be a member of the company’s PR team that responds via Twitter. Unlike the customer service reps, the PR executives don’t deal with many complaints and will usually want to resolve the issue as quickly as possible.

While they may pass it on to the customer service team, they will usually keep track of your complaint. That means there’s extra pressure on customer services to resolve it fast.

Talk to a journalist

Have you had a really terrible customer experience? Or maybe your complaint was dismissed or you don’t think it was fairly resolved?

There are dozens of finance journalists writing for newspapers and websites, who are always on the lookout for case studies to write about.

You can find them on Twitter, email your favourite money journalist or even contact a newspaper’s specific consumer champion if they have one.

Usually these writers will ring the company in question to give them the right of reply. At that point many will revisit your complaint and try to solve it more to your satisfaction, even if that’s simply with a ‘goodwill gesture’ and no admission of guilt.

There have been some beautiful examples of customers using a company’s own Facebook page to express their dissatisfaction. That means their complaint isn’t just public, it’s being highlighted to their fans and loyal customers.

A good recent example of this was when Mike Pledger posted a 400-word rant on Odeon’s Facebook page, demanding to know why two tickets and one cup of 7-Up had cost him £21.

His rant went viral, and resulted in more than 160,000 ‘likes’ and 14,000 comments. Your complaint may not generate quite as much buzz, but companies do take Facebook pretty seriously and will want to respond before too many people see it.

Write to the board of directors

So if you’re not happy with how your complaint has been handled or resolved, consider escalating the matter.

I don’t just mean asking to speak to a manager, although that’s a good first step if you’re not happy with the member of staff who’s dealing with you. But if you’re still not happy with how your complaint has been handled then consider writing to the managing director or CEO.

Their office will be busy, so they are likely to pass your complaint back down the chain and ask for it to be dealt with. When the CEO themselves asks a department to resolve a complaint speedily, that’s a heck of an incentive for them to make you happy as quickly as possible.

Complain to the Ombudsman

Finally, if there’s one thing a company hates more than public complaints, it’s a public slap on the wrist, or whopping great fine.

So it’s worth considering whether or not your issue could be resolved an official watchdog or ombudsman.

For example, complaints about banks and financial products can be flagged up to the Financial Ombudsman while issues with your energy supplier should be taken to Ombudsman Services – Energy. However, customers can't just go straight to the Ombudsman - they'll have to lodge a complaint with the company first.

Although some businesses don’t have an official regulator, they may be members of an industry group. Usually, that means companies have to meet certain standards, so the association will potentially discipline their member if they’ve fallen short of best practice.

If your issue is with a local eatery or small tradesman then your local trading standards office may be best placed to take up your complaint. You’ll find details on your local council’s website.

Bear in mind that most official bodies require you to have made some sort of effort to resolve the issue yourself first, including giving the company in question a chance to respond. Check the watchdog’s website to find out what you should do before contacting them.

If you know how to escalate your complaint then don’t forget to tell the company when you first complain. It’s in their interests to keep you from doing so as no company wants an official investigation.

All journalists should have a certain amount of legal awareness and if you’re going to complain publicly, it’s important you do too.

Be careful not to make slanderous claims; for example, don’t call the company ‘crooks’ or their service a ‘con’, even if you think they’ve behaved badly. Don’t say anything you wouldn’t be happy asserting in court.

Also, if you’re swearing or getting aggressive then it’s easier for the company to dismiss your complaint. Their staff don’t have to put up with abuse and may assume that no one else will take you too seriously if you’re behaving so angrily.

So keep it polite, keep to the facts and keep it legal. That way the company will have no choice but to act fast or risk their reputation.