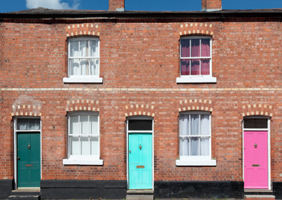 There are currently around 719,000 homeowners trapped in negative equity, according to estimates from the Council of Mortgage Lenders.  For some this is particularly cruel as it’s stopping them from starting a family.

Just before the bottom fell out of the market, banks were cheerfully lending people mortgages of 100% or even more. There was so much confidence in the ever-increasing value of bricks and mortar that lenders felt all they had to do was wait and the property would be worth far more.

Then, as news of Northern Rock began to break at the end of 2007, that confidence was shattered and the value of homes plummeted. Thousands of people were left stuck with mortgages worth considerably more than their homes.

Of course, negative equity isn’t a problem if you aren't planning on moving or remortgaging. As long as you can afford the repayments then you can simply ride it out and hope prices creep back up.

But for some couples, negative equity is preventing them from moving to larger homes – and that’s stopping them from starting families.

“It’s because we’re the squeezed middle”

Siobhan lives in the Midlands with her husband Chris and three-year-old daughter. Their two-bedroom house is now worth an estimated £20,000 less than they paid, so they can’t afford to sell it and move.

“We’d really like to have a second child,” she says. “But the second room is only a box room and we just couldn’t fit another baby in there. We certainly can’t afford to lose £20,000 – we’re in negative equity so it’s not even like we could just cut our losses.”

She’s particularly frustrated that this seems to be a problem affecting only the ‘squeezed middle’. “If we were rich then we’d just move. If we were poor then the council would find us a bigger house. But we both have jobs, we both work really hard and we can’t get a break. It’s really upsetting.”

“We don’t have space for the baby we’ve had”

Matt and Claire bought a one-bedroom flat in Manchester. They planned to stay in it for a couple of years, then marry and move to a bigger home before starting a family.

But that’s often easier said than done and the couple found themselves expecting a surprise baby just six months after they moved in.

They immediately put their flat up for sale, but it’s been on the market ever since. Their daughter is now two.

“We can’t afford to sell the flat for less than we paid for it,” explains Matt. “Even then, selling it would take all our savings and we’d have to move into a rented house.

“But right now, it’s just a nightmare. We’ve turned the only bedroom into the baby’s room, so we do everything in the sitting room – sleep, watch TV and eat our meals. It’s really depressing.

“What’s worse is that we’d always wanted two children, and we wanted them close together so that they could be friends. Now it’s probably going to be years before we can move.”

Their estate agent has advised them to cut the price to find a buyer, but Matt and Claire simply can’t afford to do that.

Did you proudly buy your first home only to see it turn into a debt millstone? After scrimping and saving to get a foot on the property ladder, it probably feels like a real kick in the teeth, whether it’s affecting your family size or not.

There are steps you can take to escape negative equity, although they aren’t quick fixes.

First of all, you need to work out if you’re actually in negative equity. If you bought a home during the peak of the boom or have a high loan-to-value then it’s fairly likely that you are.

But it’s worth asking an estate agent for a valuation, and using online resources such as Zoopla to see how much houses like yours are selling for in your area.

Talk to your lender

If you really need to move – perhaps for work or because you’re having another baby, your existing mortgage lender may be sympathetic.

You may also consider arranging to let your home. Most lenders won’t allow you to remortgage onto a buy-to-let deal without substantial equity, but they may give you ‘consent to lease’. That would allow you to rent out your home, and then move to a larger rented property yourself.

Overpay as much as you can

For homeowners with negative equity who don’t have any urgent reason to move, it’s worth considering making overpayments if you can afford to.

This lets you clear some of the negative equity while rates are low, and gets you used to paying a higher amount if mortgage costs started to climb.

Whether or not you are allowed to overpay - and how much by - depends on what mortgage you have, and the provider's terms and conditions. You should check these thoroughly before committing to overpayment.

If you only have a small amount of equity then it may well be cheaper to remain on your lender’s standard variable rate (SVR), as these are fairly low just now.

But if you prefer the security of a fixed rate mortgage, or want to see if there’s a better deal then you can compare mortgage rates through Gocompare.com.

Finally, it does seem bleak but we’re not the first generation this has happened to. In the 1990s a crash in property values left thousands of homeowners in negative equity – but they came through it and saw their homes soar in value.

WHAT DO YOU THINK? Are you in negative equity? Should more be done to help couples who want more children, or is it just tough luck? Let us know on Twitter or join the debate on Covered Mag’s Facebook page.