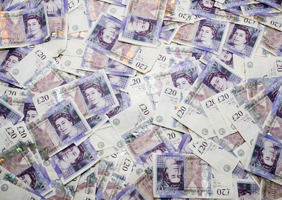 Quite a lot of money

Ofgem, the UK energy watchdog, has hit Scottish and Southern Electricity (SSE) with a whopping £10m fine for mis-selling practices.

That might seem like quite a lot of money. But with SSE’s operating profits in the last six months of last year topping £400m, finding £10m down the back of the executive lounge sofa probably won’t be too problematic.

Here are a few other recent cases of institutions getting bit by the watchdog, which are almost certainly guaranteed to get your blood boiling.

Back in 2010, financial services firm Prudential had its corporate eye on AIA - the Asian subsidiary of former Manchester United-sponsoring American insurer AIG – and intended to buy it out.

But the Pru didn’t bother telling financial watchdog the FSA about its plans to snap up the Asian insurer – even though the FSA asked “detailed” questions about Prudential’s Asian growth strategy in early 2010, just a few weeks before the firm’s plans were rumbled by documents leaked to the media. Cue a whopping £30m fine and a severe public dressing down for Pru head honcho Tidjane Thame.

Homeserve was a repeat offender when it came to nuisance phone calls, and ended up paying the price for getting on so many people’s nerves.

This was a record fine from Ofcom for the offence, and related to ‘silent and abandoned’ calls made by the company. Ofcom allows this sort of thing within reason – but Homeserve had far exceeded the limit, making nearly 15,000 nuisance calls.

This penalty - for lapses in data security after a laptop containing loads of customer info was stolen from an employee’s home - is relative loose change in the world of financial fines, so why are we talking about it?

Well, there’s the small matter of the society taking three weeks to notice the laptop had gone missing. Then there was Nationwide’s response.

The society told the BBC that it “wouldn’t be fair” if the directors had to pay for the lapse in security, and, instead, the bank’s 11 million members would take the hit from their savings. Savers lost around 8p each for Nationwide’s slip-up. Boo, and indeed, hiss.

Given that British Gas’s parent company Centrica has Scrooge McDuck levels of cash reserves for its directors to go swimming in, this £2.5m fine was small beans.
But it’s more what British Gas did – or in this case, failed to do – that we’re interested in.

The company failed to re-open the many complaints it had received from customers which hadn’t been resolved, leading to action from the energy watchdog.
British Gas had also also failed to provide customers with details about help they could get from the energy ombudsman.

If you think that’s bad, then check this out: British Gas may well be fined over A BILLION QUID if it fails to meet its carbon emission reduction targets for its most vulnerable customers, according to a report a few months ago.

Here, the FSA dished out punitive measures to the tune of £17m because oil firm Shell had told porkies over its petrol reserves between 1998 and 2003, overstating how much it had by as much as 25%. This in turn bumped up its share price.

“The size of the penalty in this case reflects the seriousness of Shell's misconduct and the impact it had on markets and shareholders,” thundered an FSA suit at the time, presumably whilst a Shell exec lit up a Havana cigar with a £50 note.

Ok, not strictly a ‘financial’ company, but we all do our banking with our computers these days, right, so that sort of counts, right?

Microsoft got handed a severe fine – nearly $100m more than the gross domestic product of Samoa, fact fans – for failing to give new users of their Windows operating system a choice between internet browsers when they first fire their computer up.

The EU itself can be blamed, to an extent. Joaquín Almunia, the competition commissioner, later admitted they’d been naïve to put none other than Microsoft itself in charge of adhering to the regulation.

The mis-selling of insurance products has been a depressing recurring themein financial news over the past few years, and CPP was up to its neck in it.
The card protection firm flogged useless insurance to people when they were already covered by their banks, and also employed unpleasant scare tactics.

Here, customer complaints handed to the FSA during a review were found to have been fiddled with by staff.

More than half of the 50 which were submitted had been tampered with before being sent to the FSA, and at least seven had forged signatures.

Both Direct Line and Churchill were run by taxpayer-owned RBS at the time, causing uproar.

Failing to adequately separate clients’ money from its own ended up costing JP Morgan a whole lot of cash.

At the time, Margaret Cole, FSA director of enforcement and financial crime, glowered: "(JP Morgan) committed a serious breach of our client money rules by failing to segregate billions of dollars of its clients' money for nearly seven years. The penalty reflects the amount of client money involved in this breach.”

Back in 2012, a long-running dispute between BT and a collection of smaller broadband providers including BSkyB, Virgin Media and TalkTalk ended with communications watchdog Ofcom ruling that BT had overcharged for its complicated-sounding Backhaul Extension Services.

To cut a long story short, it cost BT a whopping £95m.

The rigging of the complicated London Interbank Offered Rate (Libor) was one of the most unedifying scandals to emerge from the city in recent years. And let’s be honest, it certainly had some competition.

The FSA came down like a proverbial ton of regulatory bricks on two of the institutions furthest up to their necks in this unpleasant business.

Barclays is the name that most will associate with the Libor-fixing row, thanks to those intercepted emails that read like excerpts from a sitcom about the excesses of braying trader types, and the resignation of Bob Diamond. But its fine was dwarfed by the ones handed out to Swiss outfit UBS and – yes, them again – RBS.