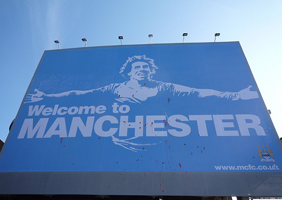 Welcome to Manchester (watch out for the footballers)

"Wrighty switched off the traction control on the 400bhp sports car...bad move"

Manchester City and Argentina forward Carlos Tevez has been handed 250 hours community service and a six-month ban for driving while disqualified and without car insurance.

It’s not the first time a young-ish man with vast amounts of money he earned from playing 'the beautiful game' has gotten into trouble while driving a fast and expensive car, and it certainly won’t be the last. In fact, just as we were writing this, Tevez’s Manchester City teammate Samir Nasri had been banned from driving for six months for repeatedly breaking the speed limit. At least Carlos will have someone to share the taxi ride back and forth to training with now.

In 2009, prancing former-Manchester United goal machine Cristiano Ronaldo spent £200,000 – less than what he reputedly earns in a week at Real Madrid – on a Ferrari 599, capable of 0-60 in under four seconds and 200mph.

Just two days after taking delivery, the flying Portuguese winger pranged the car into a wall in a tunnel between Wilmslow and Hale, on the A538 near Manchester Airport on his way to the club’s Carrington training ground, allegedly after "slipping on oil."

The winger emerged unhurt, but his car was a wreck. Even so, the remains of the motor have reportedly gone on sale in France for £40,000.

Police rushed to the scene to breathalyse and question the star, who happened to have £5,000 in cash on him. When quizzed over why he was carrying around the large sum of money, Mario simply shrugged and pithily answered: “Because I’m rich.”

He was seldom out of the headlines for the next two years, and was ultimately shipped out when his ‘erratic’ behaviour overshadowed his performances on the pitch.
We’ll miss you, Mario - and your camouflage Bentley.

Ian Wright sends a Ferrari 360 down a bank in Croydon

By 2004, former Crystal Palace, Arsenal and West Ham striker Ian Wright had hung up his boots and begun a lucrative media career. Who could forget such televisual gems as Wright Across America (on the sadly defunct Granada Men & Motors channel), Live From Studio Five, and all those occasions he talked up Shaun Wright-Phillips’s England prospects on Match of the Day?

Anyway, while out driving on a 30mph road in Croydon shortly after returning from punditry work at the Euro 2004 tournament, ‘Wrighty’ switched off the traction control on the 400bhp sports car. Bad move. He proceeded to lose control, and crashed the Ferrari down a grassy bank.

Unsurprisingly, the car was a Wright-off. To make matters worse, police at the scene found that the car had an out-of-date tax disc.

Loveable, happy-go-lucky Senegalese journeyman El Hadji Diouf has been the darling of English football fans since signing for Livepool shortly after the 2002 World Cup.

Whether it’s spitting at fans, punching ex-wives of team-mates or (allegedly) racially abusing ball boys, ‘Dioufy’ – now plying his trade for Leeds United – really knows how to turn on the charm.

He’s no stranger to motoring offences either, having suffered a 12-month driving ban after being caught under the influence at the wheel in 2005. As if that wasn’t enough, the striker got banned for a hat-trick of offences in 2010 – speeding, driving without a licence, and, yes, driving without car insurance.

Speaking of crimes against motoring, have you seen some of his custom-job cars?

Nicklas Bendtner has a run-in in Copenhagen

The Arsenal and Denmark forward, currently warming the bench on loan at Italian giants Juventus, fell foul of the law when out and about in Copenhagen earlier this year.

The 25-year-old was stopped by Danish police when they spotted him driving on the wrong side of the road in the early hours of the morning. When they breathalysed him, he was found to be three times over the legal limit.

A repentant Bendtner took to Twitter to apologise: “Dear friends, I was booked for a mild case of drink driving last night. It was a quiet night but I am very, very sorry to all my friends and fans. It is not ok to drink and drive. I take full responsibility.”

He’s got previous for this sort of thing– in 2009 while still at Arsenal, he crashed his £160,000 Aston Martin through a fence and into a tree, and was lucky to escape with his life.

Former Watford, Liverpool, Newcastle and England forward and occasional New Order collaborator John Barnes caused the nation to snort an incredulous huff in 2008 when he escaped a ban for driving without insurance by claiming it would cause him “exceptional hardship”.

The ‘World In Motion’ rapper told magistrates that he was too hard up to employ a driver after he was caught at the wheel of his BMW X5 (list price: £60,000) on the M6 without insurance. He was already on nine penalty points, and the six imposed for driving without a car insurance policy would have taken him well over the ban threshold of 12.

Barnes was then managing the Jamaican national football team as well as carrying out media work, and was reportedly earning somewhere in the region of £4,000 a week.

When pressed on the matter of the missing insurance, Barnes replied: “I'd been in the Caribbean for two months when my insurance ran out and I thought my wife had sorted it out.”

Jermaine Pennant forgets about a Porsche he bought

Stoke winger Jermaine Pennant served a three-month stretch for drink driving back in 2005 after crashing his car into a lamp post whilst several times over the legal limit.
By 2011, the player’s career had taken him to Birmingham, Liverpool (where he was a star performer in the 2007 Champions League final which the Reds lost to AC Milan), Zaragoza, and, ultimately, Stoke.

However, his brief stint in Spain caught up with him when it was revealed that he’d racked up a 480 euro parking fine for leaving a Porsche - emblazoned with a P33NNT number plate - at a train station for five months.

Spanish sports daily Marca reported that they’d contacted Pennant, who said that he’d forgotten he even owned the vehicle.

Pennant gave a different version to the English papers: ”When I signed for Stoke I didn’t have time to go back. But I got a ticket for 480 euros which my mate paid and I then paid it into his account. For 480 euros it was worth it to come to Stoke – it was a bargain!"