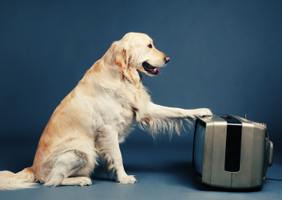 A dog with a television, yesterday

If you’ve tuned into the telly over the past few weeks, you may well have noticed the new Gocompare.com advert.

If you haven't yet managed to catch it, here it is.

There's a rich history of dogs in adverts - proving that the old maxim of "never work with children or animals" doesn't count for much in adland.

Here are a few of the best.

It needed something special to make an advert about, er, advertising, capture the public’s imagination.

Thinkbox found it in Harvey – a Jack Russell terrier. His advertising antics in 2010 earned him a massive internet following, and he returned to our screens last year accompanied by his favourite toy, Rabbit.

A big, shaggy old English sheepdog has been synonymous with British paint producer Dulux since the dawn of the swinging '60s – so much so that many just refer to the breed as ‘Dulux dogs’.

The first Dulux dog, Shepton Dash, held the role for eight years, before his successor Fernville Lord Digby (no, really) took over. He had three stunt doubles, and was driven by chauffeur to shoots. Lah-de-dah.

Fancy that! A talking dog! LOL!

Controversial one, this. The Andrex puppy – a cute Golden Labrador retriever – has sold bog roll to Britain since the 1970s and caused untold cooing along the way.

However, in 2010, the loveable rogue was replaced by a somewhat disconcerting bipedal ‘digital dog’ rendered in high-tech CGI. A real dog still appears on the packaging, though.

Between the years of 1997 and 2000, Tex-Mex fast food vendor Taco Bell utilised the services of a chihuaha called Gidget, whose gimmick was that it spoke in a Mexican accent. Genius.

UK readers might not be as familiar with the Taco Bell dog’s zany antics, but it was an absolute phenomenon in America – it even had its own toy.

The campaign ended in 2000 – and Taco Bell saw a massive 6% decline in sales, the biggest drop in its history.

The Yorkshire bitter purveyor first called upon the services of a Jack Russell terrier back in the 1980s, who performed tricks at the bar.

Then, in 2008, John Smiths teamed one of the diminutive dogs with Peter ‘Garlic Bread’ Kay and Crufts commentator Peter Purves, for its ‘no nonsense’ campaign.

What’s YOUR favourite canine-related advert? Join the conversation on Covered mag’s Facebook page or on that Twitter.