What exactly are ‘bitcoins’ and should you use them? 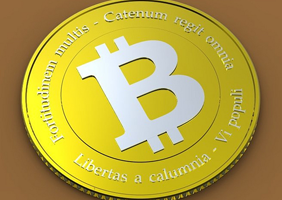 First used by hackers, the Bitcoin is now coming into mainstream use

"No one is entirely sure what the implications of a decentralised currency might be, or how well it will retain its value"

Never mind the beleaguered euro, there's a new international currency in town. And this time, it's gone digital.

If you haven’t heard of ‘ bitcoin ’ then the chances are you will soon. In fact, as it rapidly increases its market share, it may soon be a term you hear every day, so now is a good time to figure it out.

After all, you don’t want to sound as out of touch as my mum proudly declaring she’s ‘done a tweet’.

According to its creator, bitcoin is “an open source P2P digital currency”. So that’s nice and simple.

But just in case you’re still not clear, here’s what you need to know. Bitcoins are an attempt to create an international currency that doesn’t rely on banks or governments to operate. They can be used online to buy and sell items and services.

Whereas state currencies are controlled and created by a central bank, bitcoin has an entirely new way of generating new coins. Instead of being issued, they are ‘mined’. Prospectors install mining software on their computers, which carries out complex mathematics. Whichever computer solves the calculation receives a number of bitcoins, so it’s a bit like a lottery.

Don’t go thinking this is easy money, though. So many people try to mine bitcoins now that the chances of ‘winning’ a batch are pretty slim. Also, in an attempt to maintain the currency’s value, the number of new bitcoins being generated is to halve every four years.

Are they just for criminals?

Clearly it is not just cybercrooks using bitcoins; there are stories of people selling their houses using the currency and even a website that lets you buy pizza using your online cash.

Many users simply want a currency that can be used online and allows for fast transactions with foreign countries. And that could be for perfectly legitimate reasons.

But there’s no denying that some people are attracted to bitcoins because they allow almost total anonymity. There’s no real way to trace who owns them until they are exchanged into a more traditional currency. That can happen in any country and not necessarily one that’s over-strict about chasing criminals.

However, this shady reputation doesn’t mean that bitcoins can’t be useful to the wider public, which is why they’ve recently been getting such a lot of attention.

How do I get bitcoins?

The currency might be a fairly complicated economic and technological affair, but it is surprisingly easy to get your hands on. You visit an online bitcoin exchange service and convert your pounds (or dollars or euros, or whatever it is you have) into bitcoins. Alternatively, bitcoins can be mined through the use of special software to solve math problems and, as a reward, are issued a certain number of bitcoins in exchange.

These are then stored in your virtual ‘wallet’. You can download wallets as smartphone apps or use online wallets to keep your bitcoins safe, much as you would use an online bank.

However, you need to remember that these wallet providers are not banks – there’s no guarantee to replace your currency if it’s lost to hackers or other cyber criminals. With some wallet services if you forget your password then your bitcoins are irretrievably lost – so be careful!

Merchants can accept payment in bitcoin and then exchange it into a currency of their choice, although they will charge fees.

If you’re planning to use this currency, take your time researching reliable wallets and exchange services, as you are relying on these companies to protect your wealth.

The new currency was invented back in 2009. It’s believed to have been created by an unknown computer science student in Japan, going by the pseudonym Satoshi Nakamoto.

Whoever the creator was, it’s unlikely they realised that they were launching a new currency that would be used internationally. In fact, initially it was a way for hackers to exchange services.

But since then it has grown into a currency that’s used across the world; sometimes by hackers, often by more sinister criminals, but increasingly by regular people wanting to make a fast online payment.

More traditional currencies are backed by a national bank, but not bitcoin. There is no central bank supporting it. Yet the current monetary base of bitcoin is valued at more than $800m – that’s more than £528m at the time of writing.

However, partly because it’s decentralised, the value can fluctuate wildly and there are no guarantees the currency will retain that value.

The right answer here is probably that it’s experimental. The full implications of this digital currency have yet to be explored, so it’s hard to assess the full risk.

Just last year, one of the biggest bitcoin currency exchanges – Bitfloor – lost BTC 24,000, worth almost £160,000 back then, after thieves hacked the site using unencrypted keys.

And that wasn’t the first time such online exchanges have been hacked. However, incidents like this have only affected a minority of users.

Back in 2011, the value of a bitcoin fell from $33 to less than $2 in a very short space of time, wiping out some fortunes almost overnight. So it’s a good idea to think of owning the currency as speculation rather than wealth.

It’s also worth mentioning that some critics have argued that bitcoin is simply a Ponzi scheme, a claim that was partly supported by a report from the European Central Bank.

In short, there are still a lot of questions surrounding bitcoins. No one is entirely sure what the implications of a decentralised currency might be, or how well it will retain its value.

If you want to use bitcoins then tread carefully and remember that it’s experimental – and it’s still early days.

Have you used bitcoins? Would you trust them? Is this a sign that we’re losing faith in governments and central banks? Tell us what you think over on our Facebook page or join the debate on Twitter.