Five reasons why you shouldn't ignore your car's service light 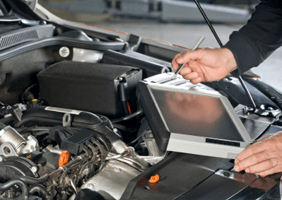 "Most people think that a service is just an MOT by another name and feel cheated that new cars expect to have a paid check up twice yearly. However, the two actually perform very different functions"

As my first three cars were all born around the time when shoulderpads were ‘in’, I had no knowledge of the car service light until I was 28 years old.

So it came as a surprise when it appeared one Saturday afternoon on the M4, just past that wind turbine near Swindon.

It switched itself on with a long, serious-sounding beep, as an extra flashy red light appeared ominously on the dashboard. But the car didn’t stop working, so I carried on regardless. I did so for several weeks – after all, the car had not long been for its MOT.

Yet the red light drew me in and wore me down until eventually I found myself keying in my pin number for a smiling mechanic who appeared to be charging me £300 for changing some oil and tweaking a headlight.

To say I was upset would not do justice to the hissy fit I threw in the comfort of my own home. I was so annoyed I began to research a letter to the government to vent my fury at the injustice of the car service.

Unfortunately, my research did not uncover the truth I envisaged. It turns out a service is pretty important. And here’s why…

1. An MOT is not the same as a service

Most people think that a service is just an MOT by another name and feel cheated that new cars expect to have a paid check up twice yearly. However, the two actually perform very different functions.

“An MOT and a scheduled service are not related, per se,” explains Diane de Voghel of the European Automobile Manufacturers' Association (ACEA). “A regular service is needed to take care of the car and the wear and tear of its parts and fluids. The MOT is a periodic technical inspection for safey – it is not designed to repair or replace worn vehicle components.”

It’s perhaps useful to use the comparison of a vaguely inebriated man - the MOT would check he could walk and talk and get himself home without endangering himself and others. The service, however, would ply that man with coffee until he was sober, put him through an intensive fitness programme, then give careful consideration to providing a new liver.

Essentially, you are not being cheated by taking your car to the garage twice a year. In fact, you need the two visits in tandem to have a healthy vehicle.

2. A service can save you money

Point one naturally leads to point two. A healthy vehicle tends to be a more affordable vehicle.

“An unserviced vehicle is likely to have a shorter life expectancy and higher fuel costs, whilst potentially being more unsafe,” says de Voghel.

The little things you may choose to ignore that a service would sort, like putting off an oil change, can also prove expensive. Oil left to its own devices for too long coagulates and gets stuck, starving your engine of lubrication. This, in turn, can break that engine, and believe me, the cost of an oil change will be far less than the cost of a new engine.

There are many similar things a service rectifies for relatively little cost that, if left to worsen, could incur a much bigger expense. A car's air filter is a good example.

3. You probably can't do some of the things a service entails

With the modern driving tests, candidates now have to be able to perform basic maintenance like tyre checks themselves. Some are over-confident in thinking anything a service can do, they can do better. This is only partly true.

“If motorists did what they could easily do, and took the slightest interest in their cars and how to maintain them, much of the cost in servicing would be mitigated,” says Rupert Lipton, managing director at the National Motorists Action Group.

As he infers, however, even if you are an amateur mechanic, a service is still needed. Cars nowadays are such complicated, computerised beasts that expert knowledge is required.

“Modern vehicles are increasingly complicated, requiring access to tools and equipment that may not be easily available to the average consumer,” reveals de Voghel. “It is recommended that vehicle owners trust their vehicle maintenance to qualified mechanics who have access to the correct tools and expertise.”

So basically, don’t mess around with what you don’t understand or wouldn't be able to afford to remedy if you break.

4. It keeps you safe

Though there are things you could fix yourself, the likelihood of you actually doing them is pretty remote – and that oversight could be lethal.

Take tyres. ”It is so easy to have cuts and damaged sidewalls, particularly on modern low-profile tyres. Everyone dreads a high speed blowout, but how many people check their tyres regularly – even before a motorway journey? Unlike things like brake fluid and coolant, there’s no warning light to tell the driver that the tyre is seriously damaged,” says Rupert Lipton.

While the MOT would pick this up, 12 months is a long time. Ensuring all is safe at the six-month halfway mark is common sense. Admitting you will never get round to the checks yourself and instead getting a mechanic to do it during a service makes even more sense.  It could save your life.

5. Not having a service can have an adverse impact on insurance claims

Even if your car makes it from year to year without a service, if anything should happen to the vehicle and you need the assistance of your car insurance company, your reticence could return to bite you.

Not having had a service wouldn’t necessarily invalidate a claim – but if it’s declared a total loss they may take the service history into account when calculating its pre-accident value, which could mean you ending up out of pocket.

A full and thorough service history could also help you command a better price when you come to sell your car on.