People of note: famous faces who are on the money 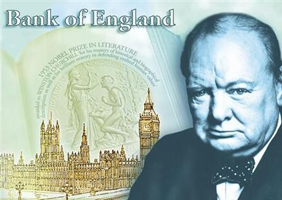 Winston Churchill - the new face of the humble fiver

History has indeed been kind to Sir Winston Churchill, who is to be the new face of the £5 note. The Conservative MP and wartime prime minister will appear on notes from 2016, replacing social reformer Elizabeth Fry.

Churchill was chosen as a "hero of the entire free world", according to Bank of England governor Sir Mervyn King, and saw off possible contenders including Robbie Williams and John Cleese (as proposed by a helpful public).

So, as we prepare to start referring to the good old fiver as a ‘Winston’, let’s take a look at some of the most memorable names of note, past and present: 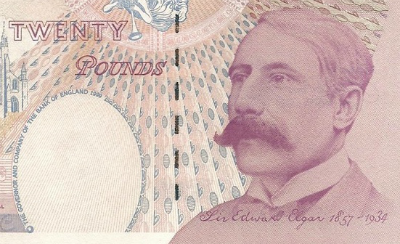 Noted for: Being one of Britain’s most celebrated composers.

Why Sir Edward was chosen to adorn a twenty is hardly an 'enigma’, thanks to his worldwide renown from the early 20th century. But life hadn’t always been easy for this lowly-born son of a Worcester music shop owner and piano tuner, who was at first largely ignored by the establishment.

But thanks to his musical genius – plus a canny marriage to a wealthy pupil - Elgar soon had the world sitting up and taking notice. Vinyl-lovers might like to note that in 1921 he opened the first HMV store, in Oxford Street, London, declaring that musicians wanted more listeners and the gramophone was the way to get them.

Face off: Elgar was replaced by economist Adam Smith, who still occupies the ‘horn of plenty’ today. 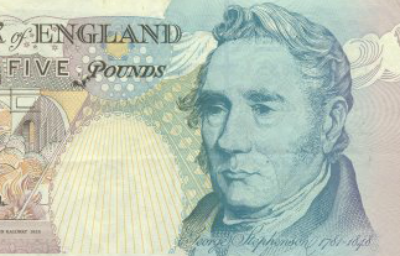 The ‘father of the railways’, Stephenson couldn’t quite lay claim to the invention of steam locomotion but his engine was certainly the slickest in town at the Rainhill Trials in 1829, a competition run by the Liverpool and Manchester Railway.

The Rocket was the clear winner, but there was a slight snag during the railway’s opening the following year when it unfortunately killed an MP. William Huskisson was struck by the engine whilst inspecting the line alongside the Duke of Wellington and, despite being driven by train by Stephenson himself, he died, going down in history as the first rail fatality.

Face off: Stephenson was replaced by Elizabeth Fry, who greatly improved the lot of women in prison. 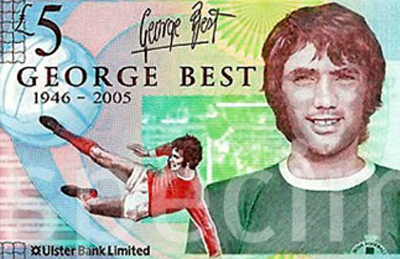 On the money: Graced one million £5 notes issued by Ulster Bank in 2006.

Noted for: Spending a lot of money on "booze, birds and fast cars" – and squandering the rest.

Football legend Best brought a rock star quality to the game during his 1960s’ heyday, and was almost as entertaining off the field with an ever-ready quip. But the Northern Ireland and Manchester United star’s extravagant lifestyle and battle with alcohol overtook the talent and he died in 2005 at the age of 59, a few years after a controversial liver transplant.

Face off: The limited edition banknote, issued a year after Best’s death, proved so popular that it sold out in 10 days. 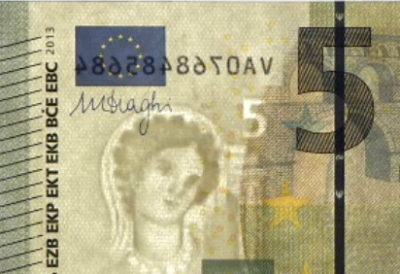 On the money: Decorating the new five-euro note unveiled by the European Central Bank earlier this year.

Noted for: Being abducted by Zeus. Struck by the Greek goddess’ beauty, he is said to have disguised himself as a white bull and lain down in front of her whilst she was out walking with her maidens.

The legend goes that Europa climbed up onto the bull’s back, upon which Zeus immediately jumped up and carted her off, leaping into the sea and carrying her to the island of Crete. The image on the new euro notes is taken from a 2000-year-old vase on display at the Louvre in Paris

Face off: It’s likely that Europa – who gave her name to Europe - won’t be going anywhere soon, given that this is only the second series of euro banknotes since the currency launched in 1999. 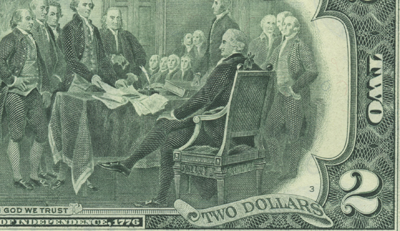 On the money: A reproduction of John Trumbull’s ‘The Declaration of Independence’ is squeezed onto the American $2 bill.

Noted for: Being a who’s who of America’s finest.

As well as John Adams, Benjamin Franklin and Thomas Jefferson, there’s Scotsman John Witherspoon, a president of what is now Princeton University and said to be an ancestor of actress Reese.

The painting shows not the actual signing of the Declaration but the presentation of a draft to Congress. Fourteen men who eventually signed the Declaration were left out of the painting, which takes being brushed out of history to a whole new level.

Face off: the $2 bill was discontinued in 1966 but made a comeback 10 years later. Today, however, it’s a rare find as less than one per cent of American banknotes are $2 bills. 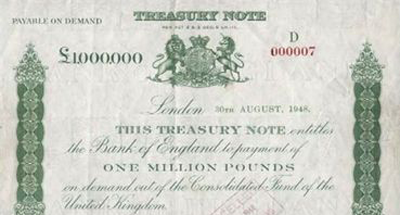 On the money: It sounds like an urban myth but, in the depths of the Bank of England’s most securely locked safe, there are actually notes worth (Dr Evil-style dramatic pause…) one hundred million pounds!

Noted for: Being ridiculously large sums of money.

One million pound notes, known as giants, and £100m notes, called titans, are not in circulation (just imagine tapping THAT button at the cash machine), but they play a vital role in the economy by backing the value of the everyday notes issued by banks in Scotland and Northern Ireland.

Face off: There’s no face on these rather pricey pieces of paper, just a promise to pay the lucky bearer a stash of cash. But Mark Twain wrote a short story called The Million Pound Bank Note, which was made into a film starring Gregory Peck, and the Queen has signed a ‘million’, which is now on show in the Bank of England Museum.