Mane attraction - the logistics of the 2013 Lions tour 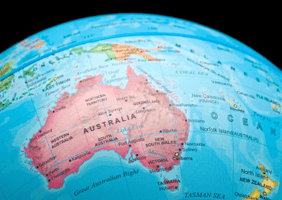 Australia - quite a big place

"Just as a good house can take all sorts of weather conditions, a good plan can withstand all types of challenges." Guy Richardson, Lions operations director

Ever wondered what it takes to transport 40 giant Lions around Australia for six weeks - apart from courage, stamina and a tanker-load of food?

Well, wonder no more because as one of British and Irish sport's most iconic teams bids for rugby glory Down Under, we can reveal the mane strategy towards ensuring pride in a roaring success. (That's probably enough lion puns to be getting on with for one article, so let's move on to the facts.) 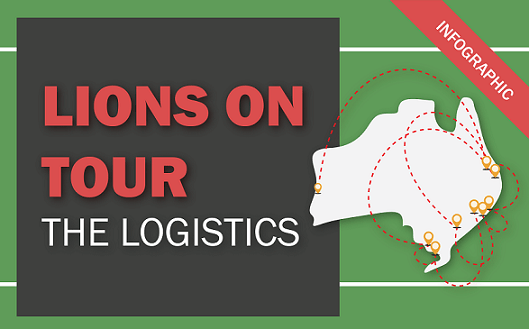 To shift 40 burly rugby players from Britain and Ireland out to and around the other side of the world - plus 26 core support staff and 19 others - you need:

Preferably a BA 747-400 like the one the Lions flew on from Heathrow to Hong Kong. It's 70.9m long, has a 64.4m wing span, and is 19.4m tall. It can fly at 614mph, has a range of 8,357 miles and can offer roomy cabins in Club World - spacious enough even for Scotland's 6ft 10in second row Richie Gray to stretch himself out on the first leg of the tour into Honkers.

The Lions have hired three 20-tonne trucks from Express Freight Management to transfer all their gear around Australia.

The idea is that everything travels ahead of the squad and is waiting for them on their arrival at each new venue.

Before they relocate in the various cities on the 10-match tour, every player packs a light 24-hour personal bag whilst all the rest of his stuff is chugged off ahead of him. It's then waiting for him as he swans in to each new hotel - a bit like when Rihanna goes on tour, only with fewer suitcases.

Two months before the Lions left the UK, much of their equipment was shipped to Australia.

This included a good deal of their medical gear, training machines and computers used by their three-strong team of analysts, who crunch the numbers on all the opposing teams.

Because of the vast distances involved - it was a 22-hour drive from Brisbane to Melbourne last week -  the Lions needed five separate sets of all this hardware. One set was used for their UK and Ireland training camps before they departed, another was based in Hong Kong where the opening fixture took place, Western Australia had another set, whilst the east coast required two more.

In line with the strategy of dividing their geography into five distinct areas, the Lions have been using five separate fleets of Land Rovers, with six vehicles in each fleet.

These are used for running general errands involving the players and management between the hotels and training venues.

They are all three-litre, seven-seat beasts with a whopping 986mm of headroom in the back seat - sufficient for Gray, Ian Evans, Paul O'Connell and Geoff Parling (all at least 6ft 6in) to sit comfortably without scraping their heads on the car roof.

These have been used in Perth, Brisbane, Melbourne and Sydney to transport the squad and their coaches from their hotels to the stadia and training pitches. An indication of the attention to detail is that certain seats have been removed to give the taller players more on-board leg room. Imagine demanding that from your driver next time you're on National Express.

All those bits of training equipment,  water bottles, energy bars and medical supplies for the day's training session are loaded onto the van.

There's a man with the van, but, more importantly, there is also a man with a plan - the Lions' operations director, Guy Richardson.

An ex-army officer, he is the Lions logistical commander-in-chief who holds a daily breakfast briefing with his lieutenants in the team hotel.

This is a campaign well-suited to a military strategist and one which has been three years in the planning. Before Richardson even wrote a single word of his outline proposal for the trip three years ago, he spent six months interviewing 45 people who had been on Lions tours dating back to 1955.

"It's a very slick operation considering we are moving 85 people around a huge country ," he says.

"I started my planning with a blank piece of paper, a blank computer screen, and a new email address. Like all good plans, you just need solid foundations.

"Just as a good house can take all sorts of weather conditions, a good plan can withstand all types of challenges.

"That's my philosophy. After that, it's about implementation and getting the right people around you. Fortunately, I have a really good team around me of top people."

The complexity of the Lions operation required Richardson to make three personal tours of Australia, checking out every hotel and training field they considered using.

His plan - with its planes, and trucks and buses being moved back and forth across Australia - even caters for imaginary players as well as those actually on the trip.

Because injured players drop like flies, and fit replacements are then flown out, the Lions carry  50 boxes of extra kit. It means any player arriving, whatever his shoe size, inside leg or neck circumference (and rugby players have some of the biggest necks you'll ever see) there is always a complete wardrobe that will feel made-to-measure the minute they step off the plane.

The Lions travel on scheduled flights as they criss-cross the country, mixing freely with fans and locals. The ethos is to be seen and to be humble. Only once have they chartered a flight and that was when they moved from Perth to Brisbane - a trek that required a capacious hold for all their gear.

When they flew south from Hong Kong, they only had 36 seats in business class so skipper Sam Warburton volunteered to go cattle.

In the end, the captain was spared that ordeal because he was carrying an injury and so hooker Richard Hibbard squeezed himself into economy along with dozens of supporters.

Richardson adds: "Twice on this tour, 85 people have got up, got on a bus, flown on an aircraft, been driven to a hotel, had lunch, got changed, and then gone training.

"Quite frankly, that's staggering but you can only do that if you have a really good system in place where everything is laid out for you before you get there.

"But if (coach) Warren Gatland says the organisation was top drawer and couldn't have been better, then that, for me, is success."