The beasts of Britain 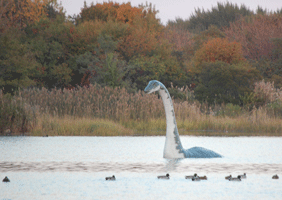 What's that coming over the hill, is it a monster? (Photo: GerritsenBeach.Net, Flickr)

"Swans have been attacked, and there are lots of one-legged ducks waddling around" Mike Davies, Llangors fisherman

Believers in such beastly behemoths have all-too-often been sidelined as freaks, cranks, kooks. Weirdos best left to their crop circles and ley lines.

I've spent a lifetime moving in such circles and believe it's finally time to go viral with the empirical evidence that proves our ancient land is jam-packed with Jurassic horrors.

In my research I've barely dared to venture further than the terrifying hinterland of Gocompare.com Towers in Newport, south Wales.

The certainty is, though, that more such beasts lay hidden throughout the UK - let me know the details on Facebook or Twitter, #BeastsOfBritain.

Gorsey: The afanc of Lake Syfaddan

Nestling in the gently rolling land between the mystical Black Mountains and the Brecon Beacons, the idyllic village of Llangors hides a dark secret…

At its apparently tranquil heart is the largest freshwater lake in south Wales, a body of water known in the ancient Welsh tongue as Llyn Syfaddan.

On its surface you're likely to see carefree holidaymakers cavorting in rowing and sail boats, children splashing along in pedalos… But underneath its glacial waters lurks something altogether more sinister, a name whispered in the dark shadows of the village's pubs - Gorsey.

Gorsey is the most infamous of the Welsh beasts known as afanc (alt. addanc), lake monsters that appear in the ancient tales of the Mabinogion. Certain legends suggest that King Arthur killed the last afanc, but they fail to account for the fifteenth-century poem from Welsh bard Lewis Glyn Cothi that refers to the afanc 'hiding in the waters of Syfaddan Mere'.

Sightings and tales of Gorsey have continued throughout the ages. Local fisherman Mike Davies claims that "swans have been attacked, and there are lots of one-legged ducks waddling around", and no less an authority than the Sun newspaper reported the most terrifying incident of modern times.

On 1 September, 1999, water-skier Darren Blake was innocently treading water in the lake. While unable to see what lay in the murky depths below, he suddenly felt a primeval pain shoot up his leg.

Eyewitnesses recalled Blake 'screaming his head off' as he was dragged to safety with 'blood spurting from his left foot'. Medical treatment would reveal a one-inch gash with six v-shaped teeth marks on the sole.

The canny carnivore responsible for the bloodshed quickly submerged beneath the waves, where local lore speaks of a network of underground caverns, possibly connected to Llyn Tegid in north Wales - or even to Loch Ness itself.

Gorsey has lain dormant since the 1999 bloodbath, but with the increase in fracking across the country anyone who has seen Piranha 3D will live in fear of where the afanc will strike next.

The winged serpents of Penllyn 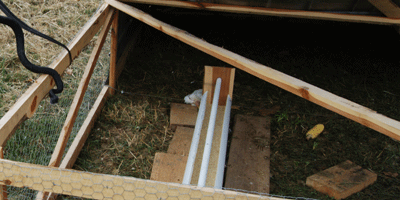 The well-to-do market town of Cowbridge is a place for the privileged, lying on the old Roman road between the modern cities of Cardiff and Swansea.

The residents could not afford to be quite so genteel in the early twentieth century, though, when the town's Penllyn Castle was the only refuge in which to escape the winged serpents that terrorised the local woodland.

The Independent quotes 'aged witnesses' - possibly from nearby Crack Hill - who, in 1909, recalled the 'flying snakes' that were a veritable menace to local chickens:

"Some of [the snakes> had crests sparkling with all the colours of the rainbow," said one old man. "[Some> flew over people's heads, with outspread wings bright, and sometimes with eyes too, like the feathers in a peacock's tail."

An elderly lady recalled seeing the 'feathered skin' of one snake that had been killed by her grandfather. He treasured the trophy for the rest of his life, but it mysteriously disappeared after he passed away.

Some speculate that the flight path of the newly built Cardiff Airport scared the winged menaces away, and domesticated fowl have been noticeably calmer over the course of the last century.

Anyone seeking evidence of the beasts, though, should try taking a gander at the winged serpent featured on the Welsh flag… try pinning that red dragon to the wall of a Cowbridge chicken coup and wait for the feathers to fly. 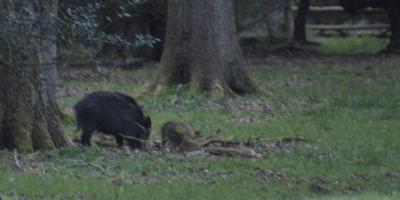 Sightings of large land beasts throughout the UK are common and recurring - in Wales alone, consider the following list:

The sightings of such animals are often explained as being related to the release or escape of exotic wildlife from zoos or private collections, perhaps as a consequence of the 1976 Dangerous Wild Animals Act.

Surely a more plausible approach, though, would be to seek an explanation from the ancient knowledge base of the land - specifically, the Dark Age Welsh prose tale Culhwch and Olwen.

The epic chase took Arthur from Ireland, across the length and breadth of Wales, over the Severn and through Devon and Cornwall before the king's dog, Cafall, drove the bloodthirsty beast into the sea.

The tale tells us that Twrch Trwyth 'was never seen again'… but consider the list of monster sightings above, and think of the famous Beast of Bodmin. Could Twrch Trwyth have simply slipped back to his old stomping grounds?

In 1999, police were called out when the so-called Beast of Bont terrorised two 10-year-old boys in Pontarddulais. A helicopter search was mounted, but the animal ran off when the boys' dog barked at it - triggering memories of the cruel jaws of Cafall?

*I want to hear your local stories about the terrifying beasts of Britain - let me know on Facebook or Twitter, #BeastsOfBritain