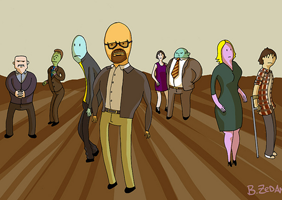 Heard about that Breaking Bad? I hear it's meant to be quite good

CAUTION: SPOILER ALERT. This article contains spoilers. We’ll avoid any mention of the ending, but you have been warned...

Now that the Albuquerque dust has settled on the final series of Breaking Bad, we’ve jumped on the bandwagon...Sorry, I mean: we’ve carefully analysed all five series to see what important financial messages Vince Gilligan inserted alongside all the cartel violence, drug abuse and Santa Muerte.

1: Have an emergency fund

That’s right, you need an emergency fund. And the same goes for us non-criminals too; if you lose your job for any reason then it’s essential to have a rainy day fund to fall back on, a financial buffer.

Most experts recommend saving between three and six months’ salary. If you can’t put your hands on that much cash straight away, do not panic and start your own hard drug factory. Just use a regular saver account and drip an affordable amount in every month; it’ll soon add up.

When you’re a notorious drugs manufacturer keeping your money safe means an anonymous self-storage unit and plenty of bug spray. But the message is a good one.

Always assuming you’re just a normal saver rather than a drugs baron, it’s a good idea to keep your money safe by saving it with a UK-regulated bank. That way up to £85,000 per account is covered by the Financial Services Compensation Scheme.

If, like Walt, you’ve amassed more than £85,000 spread your money out across more than one banking institution so it’s all protected.

When the terrifying Salamanca Brothers tried to take out Hank, he needed crazy amounts of physiotherapy to recover.

Unfortunately, his health insurance didn’t meet the cost and he had to rely on criminal cash to pay for his treatment. He was underinsured.

The lesson here is that when you take out any insurance policy, you mustn’t be tempted to save money by cutting back on cover you need. With car insurance, if you need a courtesy car then be sure to pay for an insurance policy that provides one. If you can’t afford a high excess then don’t add one to the policy just to cut the cost.

Breakdowns always happen when you can least afford them. Like when you’re stranded in the middle of the desert cooking a batch. Or when you’re trying to reach the airport in time for your flight.

Don’t risk being left stranded. Breakdown cover can cost as little as £20 a year for a basic policy, and it’s well worth having. If you’re Walt then some sort of legal cover might also be needed…

So you’re rolling a barrel through the desert and you desperately need a vehicle. Fortunately for Walt, the barrel in question was full of cash and he was able to buy one.

But it’s very easy these days to just carry debit and credit cards, and no cash. This can mean you have to spend more in shops with a minimum card threshold, so it’s always worth carrying some actual money too.

It’s also useful if you need to suddenly go on the lam.

6: Spend time on your finances

Walt was a clever guy. When anyone was trying to kill him, he could come up with incredible plans. That makes you wonder why he’d never turned that massive intellect to making more money before, rather than scrubbing cars in his spare time.

So if your finances are a bit tight then don’t wait for a disaster to strike before you take action. Spending just an hour or so a week managing your personal finances can save you hundreds or even thousands of pounds a year.

Taking the time to switch gas and electricity, find a cheaper insurer, make sure you’re using the cheapest loan; all these things can add up to some big savings that give you more breathing space.

7: Get the right home insurance

Remember in the first series, when Crazy 8 is… disposed of? Remember what happens to the bath?

Unless you’ve blocked the whole scene from your mind (which I’ve tried to. That was pretty unpleasant), you’ll know that Jessie allows a bath to fall through the floor and, well, splatter.

No home insurance policy is going to cover accidents caused while disposing of bodies. However, it’s a good reminder to get a policy that includes accidental damage and DIY disasters – for when you’ve done something as stupid as dissolve a bath and a floor by accident.

There’s a joke that in the UK version of Breaking Bad, Walt gets his diagnosis and then gets treated on the NHS. The end.

But even though we’re lucky enough to have the NHS, a bout of severe illness can be a real financial strain. If Walt had life insurance with critical illness cover then he could have cleared the mortgage, secured his kids’ future and even paid for private treatment.

Of course, the writers might have struggled to fit in his emotional journey of harrowing self-discovery and moral mutilation, but it would have made personal finance journalists happy.