What is the Green Deal... and why are people ignoring it? 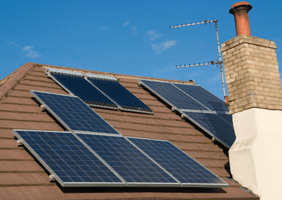 If you think that the Green Deal will allow you to turn your abode into a swanky 'eco home' then think again...

"Only 36 households have actually gone through the entire process"

How energy efficient is your home? Unless you live in a house built in the last 20 years, the answer is likely to be ‘not very’.

There's a chance that the Green Deal could help. It's a relatively low interest loan arranged to make energy efficient household improvements.

It’s borrowing with a twist: the lending is attached to your property rather than you, and it’s meant to be paid back by the savings you make on your fuel bill.

This means that people of most ages and incomes are eligible to apply, and those who aren’t can actually get improvements done for free under the ECO scheme.

However, since its inception in late 2012 only 36 households have actually taken up and completed Green Deal loans, leading to serious questions about whether the scheme is worthwhile.

How the Green Deal works…

‘Pay-as-you-save’ is the buzz-phrase here.

A Green Deal energy provider will finance energy efficient measures made to your household and the saving you make on your bill will then pay off the loan plus the interest, which is fixed between 7-9% depending on provider. If you move, the loan remains with the house.

What the loan pays for…

There are 45 improvements recognised by the Green Deal.

As well as energy-efficient measures such as insulation, double glazing, draft exclusion, lighting systems and a more efficient boiler, it is designed to fund renewable energy sources such as ground-source heating, solar panels, biomass boilers, wind turbines and more.

The first step is to get assessed. Your house needs an up-to-date Energy Performance Certificate (EPC) and you need to undergo an occupancy assessment to ascertain how much energy you use.

On average this review costs £120, although it can range from £90-200 depending on which company you use. All major energy suppliers offer this service and there are many independent assessors.

Regardless of who provides this service, assessors are audited, trained rigorously and cannot under any circumstances attempt to sell you products.

Details of all assessors in your area can be found on the government’s website.

Be prepared: The assessment takes three hours, they’ll survey your building and you’ll be asked personal questions about your usage.

As they’re audited, assessors will also take photos of appliances and the building itself, which will be kept on record for five years.

Within a matter of weeks you’ll be sent your new EPC along with a list of recommendations and details of how much energy - and, crucially, money -  you’ll save with each measure.

The majority of the 40,000 people who’ve started a Green Deal application are currently at this stage, having paid for the review but not taken things further.

The next stage is to find a Green Deal energy provider to discuss the finance available based on your usage, and what measures you can implement with that money.

Once you’ve signed an agreement, the provider will then introduce you to Green Deal-accredited installers who will all provide quotes.

Finally, the improvements will be made and you’ll start to reap the benefits… and pay off the loan.

Why have so few people gone through with this so far?

Time is a major factor. The Green Deal is complex and involves a lot of form filling and general administration.

There have also been well-reported problems with energy suppliers organising finance. For instance, up to June 2013 British Gas was the only company which had actually had full finance confirmation from its bank.

Plus, some of these improvements take a long time to fulfil, which may explain why only 36 households have completed the process so far.

But the biggest reason is arguably that the Green Deal can’t finance everything. And, as exciting as some of the technologies are, there's no way your energy provider can finance them and make their money back.

So, say hello to ‘the golden rule’.

The so-called ‘golden rule’ means that the estimated savings have to be equal to, or greater than, the payments associated with the loan.

But unless you continue to keep the temperature in your house at a level close to what it was before the work was carried out - which may well have been quite nippy - you may not hit those estimated saving targets.

So the idea of installing solar energy or ground source heating and making your own energy is only really applicable for houses that are already energy efficient. And as those things cost a lot to install, there’s no way you can pay back the loan within the time of the technology’s warranty.

While the Green Deal can help to fund these large-scale improvements, you will have to find a lot of the funds yourself.

Richard Hiblen, founder of independent energy consultants Green Square, has recognised another possible pitfall. The Green Deal providers can only finance Green Deal-approved installers. Because a lot of work is required to retain their approved status, they are frequently less competitive than their non-Green Deal approved rivals.

He suggests looking into applying energy-efficient measures yourself before signing any green dotted line. “It’s wise to research quotes and the possibility of rectifying each measure in your own time with your own finance," said Hiblen.

“The five major things that are picked up by your Green Deal assessment will be double glazing, cavity wall insulation, a new boiler, loft insulation and efficient light bulbs. Get competitive quotes and, if you can self-fund or find a lower interest rate, then do it. Those measures do pay for themselves. I’d only advise the Green Deal if someone’s got no money, can’t borrow and needs to make those improvements to take control of their heating bills.”

Deal or no Deal?

The Green Deal has suffered some bad press since its launch, and there certainly appear to be valid concerns.

However, it remains a potentially interesting prospect if it’s viewed as a way to improve the existing efficiency of your home and not turn it into a sustainable house of the future. And, as it’s attached to the property, it’s available for most people and not just those with savings.

The cashback incentive scheme isn’t to be sniffed at either. The government has put aside £40m for early adopters, including £100 for loft insulation, £650 for solid wall insulation, £250 for boiler upgrades and £320 for double glazing. This scheme ends in March 2014.

The UK has a long way to go before it gets anywhere near its desired carbon emission targets. The Green Deal and ECO scheme for low income households are signs that the government is attempting to tackle the issue seriously.

Whether you decide to sign up or not, the information available and developments you can make on your own house are well worth taking note of.