What's the deal with crowdfunding? 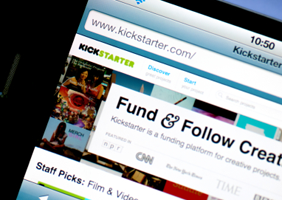 Kickstarter has allowed many businesses to get off the ground...but it doesn't always work

If two’s company and three’s a crowd, then anything more than three must be a new form of finance for business or creative projects to get off the ground.

Crowdfunding has been around ever since the first caveman with a sharp spear dished out prime cuts of mammoth steak to those who had helped him with the ambush.

It is, in essence, a promise to reward for a little help towards a big idea.

But a combination of easy internet access, tight-fisted bankers, and the whooshing turbo charge of social media has given this age-old notion fresh wheels.

Like Chris Froome, crowdfunding has broken clear from the peloton of long discarded economic theories and is thundering towards new fame and fortune. It has a yellow jersey on and it’s pedalling hard up the virtual Champs-Elysees.

For those yet to ponder the merits of giving a tenner towards some scruffy unknown band trying to cut their first album, or a games developer slaving to create the next Minecraft, here’s how it works: people with ideas and projects that require money showcase their ambitions to the wider world, usually via a website. Backers (the crowd) then pledge financial support in return for a specified reward.

In the case of the US-based crowdfunding site Kickstarter - which launched a UK operation last November - there is a fixed time limit and all pledges are scratched unless a target figure is achieved.

The rewards are also not investments as such. You are not buying shares, although a signed first album, novel or film script may have a significant value in time if you helped wedge up the new Adele.

Other crowdfunding sites are more beady-eyed. With Seedrs, the crowd are acting as pure investors who are buying shares in start-up companies.

There’s no such thing as a free lunch - even in cyberspace - so Kickstarter take a 5% cut of successfully funded projects and Seedrs charge 7.5% on money raised by a new company, plus the same from profits made by investors.

Budding young foodie tycoon Michael Thomson raised £80,000 through Seedrs to set up his own cheese-making business in Newtownards, Northern Ireland, a couple of months ago.

But not every project has a silver - or even a pungent blue-veined - lining.  Kickstarter admits that a little less than half of projects reach successful funding through it, although they claim that 46,000 have got off the ground since they first launched four years ago.

For every Pebble (a big-faced watch that has apps and can link to your phone), which quickly raised $10m (US), there are other projects that skimmed across the surface before dropping like . . . well, like a pebble.

Duncan Aitkenhead is a groovy kind of farmer based in Llanon, just outside Aberystwyth in mid Wales. He owns a herd of buffalo and used to make ice cream. Now, he makes Buffalo Cheddar. But he also wants to produce what he believes his gentle-eyed buffalo were put on Earth for - gorgeous, creamy, Mozzarella.

For that he needed special equipment so he tried to raise £12,750 on Kickstarter but found himself about £8,000 short by the time pledges ended after 30 days.

He insists that he has not lost faith in crowdfunding, but struggled with the idea that Kickstarter have to give their approval to a proposer’s reward scheme. He also says a successful scheme probably needs a good shove along the road towards attracting enough publicity. "I knew that Kickstarter had begun in America and then come over here and I'd been aware of crowdfunding for a while. I put the proposal together and also made a video. In the end, Kickstarter didn't like my original rewards even though they seemed to me to be very fair and generous.

"You definitely need some way of generating publicity and we did get a bit of coverage from the local newspaper. But you need to use Twitter and then hope it goes viral.

"But they are right to put a time limit on it. You can't just leave it as an open-ended commitment, otherwise people will never take the plunge and pledge."

One of the more recent criticisms of crowdfunding is that small guys have been crowded out by the big guys.

Hollywood stars, already hardly short of a few quid, have begun to tap into their vast armies of followers as a way of funding some vanity project the traditional studios are unwilling to cough up for.

The producers of the forthcoming Veronica Mars movie have raised $5m, even though they only asked for $2m, and now Scrubs actor Zach Braff has trousered $3m of pledges to make a film called Wish I Was Here.

Yeah, I bet farmer Duncan wishes he was where you are, too, Zach.

But even film fans know their limits. When Melissa Joan Hart (of Sabrina the Teenage Witch fame) passed around the Kickstarter begging bowl to make a rom-com called Darci’s Walk of Shame, she shamefacedly had to admit defeat after raising only $51,000. That was about 5 % of the sum she was hoping for.

Duncan Aitkenhead reckons the ethos of crowdfunding will survive, even if it needs to adapt.

His search for funding has gone on through his own website - a kind of freelance crowdfunding operation, rather than one linked to a main platform like Kickstarter or others such as Indiegogo, Quirky and Crowdcube - and he believes something more similar to the microcredit concepts common in some poorer countries may be the way forward.

He adds: "An alternative is certainly needed to bank funding. Co-operative thinking exists in France among the farming community and in many other countries.

"The whole issue of investment for businesses needs to be dealt with, because at the moment it's just not working."