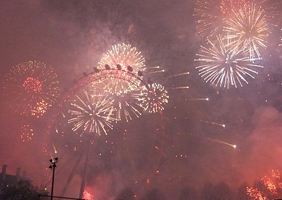 According to the government, we’ll be spending a booming £380m on Guy Fawkes festivities this year.

So, let's celebrate this staggering sum with a brief look at man’s 2,000-year-old fascination with explosions…

All hail the mighty bamboo plant: a major player in the history of paper, it also provided primitive firecrackers.

Discovered in China during the Han Dynasty (206-220 BC) moist roots were thrown on a fire, creating air pockets that exploded unexpectedly. Known as pao chuk, they were used to scare away evil spirits.

All hail the mighty monks: around 300 AD, Chinese monks attempted to find the elixir of eternal life. Ironically they discovered a crude gunpowder recipe instead. Realising it had no immortal properties, they packed it in bamboo shoots to create real firecrackers.

By the 13th century an English Franciscan monk, Roger Bacon, became one of the earliest Europeans known to have studied this magical explosive powder that had arrived along the Silk Road. Identifying its fatal dangers, he recorded his results in code.

Italy is the artistic home of fireworks. In the 13th century scientists experimented with powdered metals to create gold and silver sparks.

They also created flash powder. Hotter and faster-burning than gunpowder it’s the main ingredient in every firework we know and love today and was once used in camera flashes.

Kuwait holds the record for the world’s largest firework display to date. On 10 November, 2012, 77,282 fireworks were lit during a 64-minute celebration of the nation’s 50th anniversary. It cost a cool $15m!

Other records include the most rockets lanched (125,801 in the Philippines), largest Catherine wheel (32m in diameter, Malta) and Portugal’s record-breaking largest rocket, which weighed in at 13.5kg and was 7m long.

The technology and planning behind each large-scale televised public display is mind-boggling.

Software called Shellcalc is used to work out exactly where every firework will fall in every possible situation.

Four different contingency plans are designed for different weather conditions and camera crews are told how high each explosion will be, and in which direction it will take place, to ensure the spectacle is captured effectively on film.

When displays take place in public monuments (such as the London Eye), for safety reasons the crews are not allowed on site until the last possible moment, giving them a matter of hours to rig up their fireworks.

Have fireworks, will travel

Liuyang is the firework buff’s Mecca.

The Chinese city literally translates as ‘fire flower’ and it’s where the majority of fireworks in the world are made, with factories dotted across the city.

Each factory makes different components to ensure there are no catastrophic explosions. According to firework blogger Harry Gilliam, tests are made daily, around the clock.

If you think that’s cool, take a look at the city’s annual firework festival. Held every October, it’s where brand new firework inventions are debuted.

Ever wondered what a 17-minute display would be like if it went up in 15 seconds? Well wonder no more.

Apparently an ‘over-zealous back-up file’ triggered a 7,000 firework mishap, causing over $300,000 worth of explosives to ignite at the same time during San Diego’s Big Bay Boom 4 July celebration in 2012. Amazingly, though, no-one was injured!

The main man behind each display is known as a firer. Weirdly, in the UK there is no legal qualification to be one.

There are, however, such strict laws on storage, transport, sale, public liability and health and safety that you’d never be able to get close to the action without serious industry experience.

The British Pyrotechnists Association has established recognised benchmark qualifications and training schemes. If you’re interested in this fascinating art as a career, they’ve got all the information you need.