A short history of… the Mini 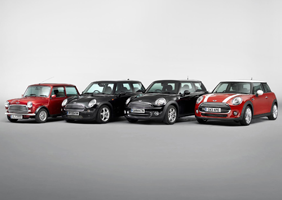 The Mini through the ages

"Despite the numerous changes over the decades, you can sit a 2000 Mini next to a 1959 Mini and still be looking at fundamentally the same car"

The Mini is an icon of British culture, as much a thread of the national fabric as cups of tea, red phone boxes and delicious, room-temperature ale with twigs floating in it.

With the latest incarnation of the car arriving this year, let's take a trip down memory lane to see how the Mini's triumphs and travails brought it to where it is today...

The Mini is born 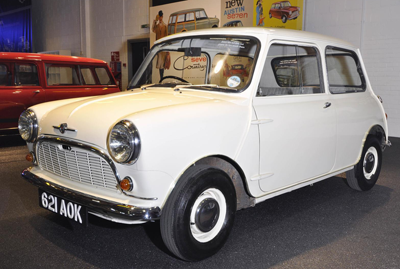 The original Mini was spawned in response to the ’57 Suez oil crisis.

The British Motor Corporation (BMC) tasked Alec Issigonis with creating a small, fuel-efficient vehicle. Leonard Lord, President of BMC, was also keen to see that a safer alternative to the bubble cars that were popular in Germany would be built and sold in Britain.

With the insistence that his design be no more than 10ft long and would devote an unprecedented 80% of its footprint to passenger and luggage space, Issigonis took his tablecloth sketch to production reality in under two years.

Launched in 1959, it was a radical design for its time. The one pictured above was the first to roll off the production line.

The transversely mounted engine with its gearbox-in-sump arrangement drove the front wheels, and this miraculous bit of packaging allowed four fully-grown humans to clamber inside without deployment of lard and shoehorns.

Its frugality and practicality as a city car were immediately obvious, and it was an instant hit – but the real fireworks began when people started to realise the performance advantages of such a light and nimble car…

The Mini finds fame and fortune 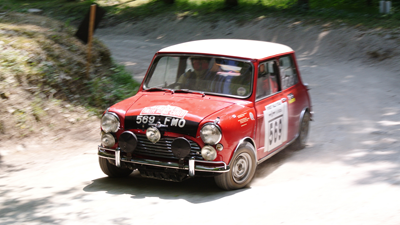 John Cooper, a Formula 1 manufacturer champion and friend of Issigonis, took the Mini rallying in 1961.

Before long the diminutive rally scamps were available to the public, and when Paddy Hopkirk won the 1964 Monte Carlo rally in a Mini Cooper S the legendary status of the brand was secured. 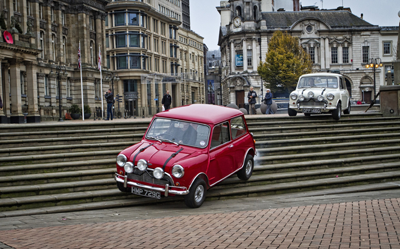 Arguably the most famous of the Minis were the round-nose, 1969 Austin Cooper S getaway cars that starred in the Italian Job. These were the cars that really thrust the marque into the cultural limelight: plucky homegrown heroes, and affordable ones at that.

The Mini branches out 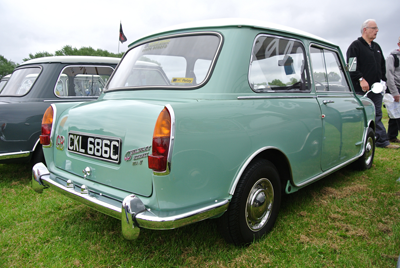 1969 saw the introduction of the Clubman. This supplemented the existing diversity of Mini offerings – it was also available as the Riley Elf and Wolseley Hornet, which had a handy boot grafted to the rump.

It was sold in Countryman and Traveller form as well – baby estate cars with wood-framing – and you could also get a Mini as a little van or as a pick-up. If you fancied a military-spec diddy jeep, there was the rugged little Moke. It really was a versatile platform – BMC was able to sell basically the same car in many, many guises.

Keep this concept in mind... It may resurface later… 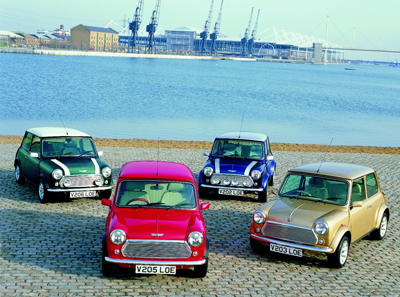 Despite the numerous changes over the decades, you can sit a 2000 Mini - like the ones above - next to a 1959 Mini and still be looking at fundamentally the same car.

It was a solid formula, why tinker with it? The Beatles had Minis. So did Steve McQueen, Twiggy and Marc Bolan. Minis were cool... Weren't they?

The Mini falls on hard times 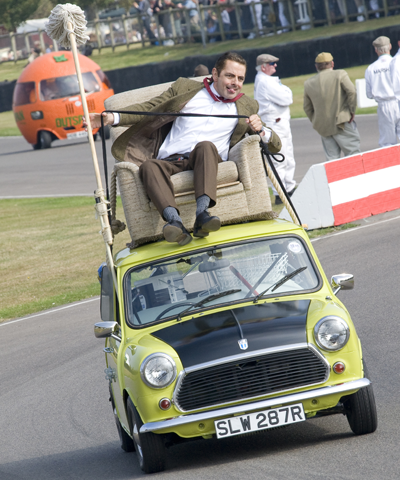 But for all this apparent success, the Mini wasn’t a beloved icon throughout its production life.

No, the death of the '60s was when the rot started to set in – both figuratively and literally - and production dwindled steadily through the late-1970s and ’80s.

What was once chic became an increasing anachronism. Mr Bean’s 1977 Mini (above) symbolised this. By the '80s, many saw the model as outdated, backward, risible.

Every year the Mini was made to look more basic by newly developed whippersnappers in the burgeoning 'supermini' class, such as the Volkswagen Polo, Ford Fiesta and its own stablemate, the Austin Metro.

The Germans dropped the ailing UK brand like a hot potato in 2000, when the original Mini finally ceased production... But it retained the rights to the Mini name... 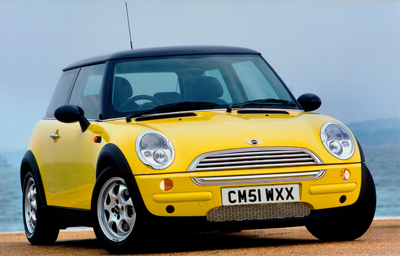 The 'new' Mini has little to do with its predecessor, aside from being front-wheel drive and powered by a transversely mounted, four-cylinder motor. And, well, being a car.

Built from 2000-06, BMW’s UK-built retro hatch sought to recapture that '60s joie de vivre. But its gestation was famously fraught, rife with Anglo-German political strife in the boardroom. The final R50 design came from Frank Stephenson, an American designer who would later lead the design of Fiat’s rebooted 500.

It was initially offered with various levels of utility and performance and, thumbing its nose at its forebears, there was also a diesel. Hey, that’s the modern world for you.

A convertible soon came along, further bolstering the car’s image as a fashion accessory.

Unfortunately, what BMW intended to be a car that ignited memories of '60s cool rapidly became known as the car of choice for shiny-suited estate agents...

The new Mini range expands… and then some 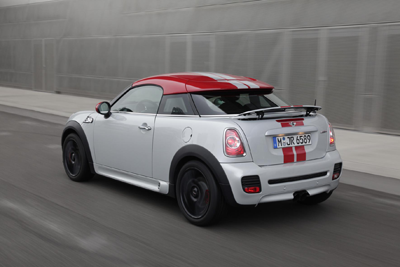 The revised, second-generation Mini, built from 2006-13, is where the diversification - and ensuing befuddlement – kicks in.

2008 saw the arrival of the Clubman, which was a sort of longer estate version. (Surely should have been named the Countryman, then?). This, in turn, spawned the Clubvan – which was, er, a van.

The first two-seater Mini, the Coupe, was launched in 2011 – it looked like a soft-top, but wasn’t, so they added the two-seater soft-top Mini Roadster, which was slightly different to the Convertible. 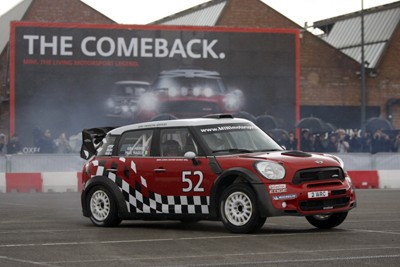 To further irritate the purists, 2010 saw the arrival of the Countryman – a five-door crossover SUV which bore so little relation to the original Mini that the fact that it was campaigned as a WRC car seemed genuinely odd.

Frank Stephenson, who at this point was working on McLaren’s MP4-12C, hated the Countryman, admitting on its release: “Oh, my gosh, I don’t like it. I mean I don’t like the whole new trend at all. I think they just wildly abused the brand.”

And as if all of this niche-building wasn’t enough, the Paceman -  essentially a three-door Countryman - appeared in 2012.

Phew. Confused? Yeah, so is everyone else.

At this point, the Mini had a finger in every demographic: fashionable 20-somethings, families, motorsport fans… Where would it end?

What next for the Mini? 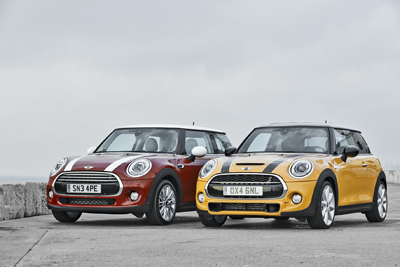 The New New New Mini is bigger in all dimensions. And yes, we’re bound to see yet further diversity in the model range. 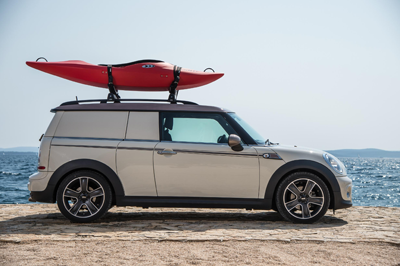 Now that we’re used to a hatchback, convertible, coupe, roadster, van, SUV, and slightly different SUV, what do you think will be coming next? A camper van? A scooter? A single-seat racer? A boat? Who can say?

The Mini brand today can sell pretty much anything. It’s bafflingly complex, sure… But in spirit, it’s not all that different to what BMC were doing with the Mini back in the 1960s, is it? 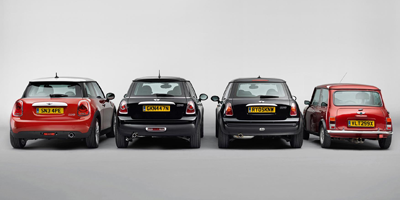