What are the alternatives to Royal Mail? 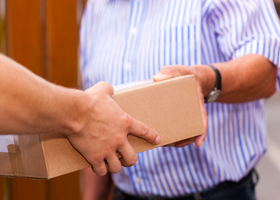 As Dave handed over his parcel he wondered if he was making the right choice...

"The delivery industry as a whole has perception issues and struggles to meet consumer demands," Dick Stead, executive chairman, Yodel

Privatisation and price rises mean Royal Mail is no longer the de facto postal service in the UK.

There's a surprising amount of choice in the marketplace, but quality of service varies wildly. Yodel has twice been voted the worst parcel delivery service by MoneySavingExpert readers, while DPD and Royal Mail were named the best in this year's poll.

But what about when you're the one sending the parcels?

Royal Mail still has a monopoly on letters, but when it comes to larger parcels its prices aren't that competitive. A walk to the post office is so simple that most customers don't think to consider another option, but retailers like Tesco and Asda have stopped using Royal Mail in favour of other services which track your delivery and provide a guaranteed time slot.

Thinking about using a competitor could save you more than a few quid - in some cases as much as 50% over Royal Mail, judging by the prices on the websites of rival firms. And you may not even need to leave the house…

Prices vary widely across different services and depend on the size of parcel and the speed of delivery desired - next-day, two-day or three-to-five days. If you want to post internationally you'll have to pay even more.

The quickest way of finding the cheapest delivery option is to use a parcel comparison website - there areafew and all you need to do is input the weight of your parcel and postcode.

If you're posting a package weighing less than 2kg, then Royal Mail will most likely be the cheapest option. For anything ranging from 2-5kg, My Hermes charges £5.40 and will pick up the delivery from your door.

One of the most talked-about delivery services around because of its low prices, My Hermes drivers have a great reputation and will pick up any item from a safe place if you're not in the house. Delivery takes longer than the Royal Mail - between three and five days, with no next-day delivery option.

Posting a similar parcel with the Royal Mail could cost you around double that. However, the Royal Mail has a more generous £100 offer of compensation in the event of a parcel going missing. My Hermes will offer just £50, with an option to increasing the compensation to match Royal Mail's with a £2.20 insurance bolt-on.

A number of retailers use Collect+ as a way to deliver parcels without the recipient needing to be in the house. The company's clever use of local corner shops means you can (in theory) pick up your parcels without journeying to the post office or an out-of-town depot.

And it works both ways; you can drop off your parcel at a designated Collect+ shop and track its movements online.

Delivery is reportedly slower than advertised, and you might have to travel a distance before you can find a designated Collect+ point.

If speed is of the essence, Parcelforce, owned by the Royal Mail, could be a viable (and reasonably priced) option.

Next-day delivery with collection for a 3kg parcel is available for £11.49. But this requires you to wait in for the delivery to be collected with no idea when a driver might appear - for an extra £1.50 they'll promise to be there before 12pm.

CityLink offers the same service for less money - £8.50. Again, you may have to wait in all day for the parcel to be collected. Upgrading to a timed collection will cost £12.99.

If you sell items on eBay or post packages regularly, lots of delivery services offer discounts on bulk deliveries and for regular customers - Collect+ and Parcelforce both offer special prices for eBay sellers.

"With My Hermes I process everything online - weight, dimensions, address etc. They then come to collect my parcel from an address of my choice, usually the next day. The packages usually take between two and three days to be delivered. I have had no complaints as of yet. The Port Talbot drivers from My Hermes are very nice, we always have a little chat. It makes a huge difference compared to the more popular couriers who practically throw my parcels into the van.

"I do use Royal Mail when I am sending small items. Since their new pricing, sending a small parcel is very reasonable. But My Hermes can't be beaten for larger and heavier packages."

"I ordered a lot of rugby tickets to be delivered by Royal Mail to my home. When I arrived home at lunchtime, there was a card saying that an item was not delivered, and that I should go to the main post office to collect the parcel after 2pm. When I got to the depot I waited for over an hour and was told that there was no trace of my parcel.

"They eventually took my number and told me they'd phone when it was back in. But all the postmen had already given back all the undelivered mail! The manager and the regional manager got involved and the parcel turned up the next morning in a different sorting office - they had told me the night before it couldn't have gone to another sorting office. Weird!"

When we asked Facebook and Twitter about experiences with delivery companies, we received both negative and positive comments about various providers, but Yodel stood out. From rogue parcels to packages left by bins to orders being delivered to completely different towns, Yodel customers had a lot to say...

Yodel executive chairman Dick Stead said that the company is working hard to dispel its negative reputation: "We're desperately trying not to make mistakes," said Stead. "We contend with road conditions, computer conditions and, of course, it's human beings who are delivering the parcels.

"The delivery industry as a whole has perception issues and struggles to meet consumer demands. Of course we can do better, and that's why we see complaints as a positive, not a negative. A recent error that would've affected one in 20,000 orders only came to light because a customer took the time to explain in detail what went wrong."

Have you ever had a terrible experience with parcel delivery? Or a great one? Tell us onTwitterorFacebook.