Should your next car be a pre-reg bargain? 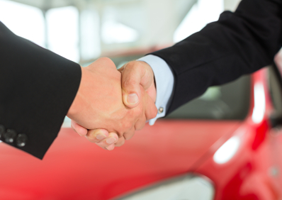 Bernard had managed to negotiate himself a cracking deal

"Pre-reg might give short-term gains and long-term pain for car dealers, the car buyer is the one who actually stands to benefit"

If you believe the trumpeting from the Society of Motoring Manufacturers and Traders (SMMT), new car registrations are positively booming.

The numbers are up for the twentieth consecutive month, allegedly driven by ‘exceptional private demand'. Surely sales must be on a similar upward curve?

Well, perhaps not. Scratch the surface, and all might not be what it seems.

Car Dealer magazine’s James Baggot reckons that pre-registered cars – ones which have been registered by the dealer or even the manufacturer themselves rather than a buyer – are making the numbers look a lot more impressive than they are. And with the SMMT staying cagey on the specifics, he may well have a point.

Baggot writes: “We all know pre-reg is happening – and happening in a big way. I’ve spoken to a number of dealers who’ve told me so and even been present in their offices when a big manufacturer rep calls offering them a boatload of cars with £5,000 off if they’re registered within the next five hours. I’ve spoken to sales directors, too, who’ve told me it’s going on – and more manufacturers are guilty of it than would ever admit.”

So why are they doing it, and why should you care?

Pre-registering cars lets dealers continue to hit their sales quotas and keep the orders coming in from the manufactures during quiet periods. And while the practice might give short-term gains and long-term pain for the dealer, the buyer might be the one to benefit.

Chris Pollitt, a former car salesman and regular Covered contributor says: “As a lowly salesman, I never got too involved in it, but the it's all to do with hitting targets and getting bonuses. I’ve heard tell of a dealer who gave what was essentially a two-for-one offer – two cars with 50% off – so he could hit his targets.”

As soon as dealers register the car, it becomes ‘adopted stock’. This means that it's the dealership's responsibility to pay for it.

It's also an asset which depreciates in value every day it sits on the forecourt. The sooner a dealer can get it off their hands, the better – and for bargain-hungry buyers, timing is everything. “I never witnessed anything truly massive – unless it was right at the end of the month when dealers were desperate to shift stock,” says Pollitt.

It also helps if you’re targeting a model which is due to be superseded. Jennifer Perry, a company director from South Wales managed to land big savings on a Volvo V70 estate a few years back. “The car retailed at £27,000, but the dealer offered the car at £19,500. But I ended up paying £17,000 for it as I part-exchanged my old Rover 75. It also helped that there was a brand-new version coming in,” she recalls. “I’m still driving the car today.”

Elsewhere, Nick Hall, a marketing manager from Bristol saved around £6,000 on a Toyota Rav4  several years ago. “It was six months old, and pre-registered by the dealer – it only had the delivery mileage on it. It was essentially a brand new car with a second-hand discount.”

So while there’s very little to argue against letting the dealer take the biggest hit on depreciation on your behalf, there are issues to be mindful of – warranties, in particular.

Manufacturers’ warranties commence when the car is registered, not when the driver takes ownership of it. So, if your prospective pre-registered car comes with a three-year manufacturer’s warranty and its been sat on a forecourt for six months with the dealer's name on the logobook, you’ll only get two-and-a-half years of cover.

Potential buyers should also make sure that the car has indeed just been sitting on the forecourt, too.

Pollitt says: “If the car’s got a particularly high mileage (anything more than the delivery) , you should check whether it’s been used a demonstrator. But other than that, pre-reg cars should be pretty much the same as ones which have just come out of the factory.”