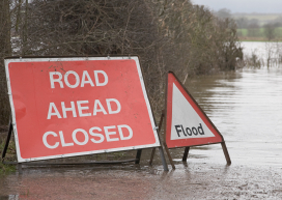 "It’s unlikely that one series of events will cause an increase in premiums across the board," Ben Wilson, Gocompare.com

The news over the past few weeks has been dominated by scenes of communities devastated by floods.

The images of evacuated households and submerged farmland are heartbreaking, but they’re not entirely surprising given the seemingly increasing regularity of these events – after all, it was only a few months ago that the St Jude storm wreaked havoc across the country.

Hopefully the worst is over, but communities are only just beginning to piece their lives back together. In some cases it may take months to get back to normal.

So far, insurers have paid out over £70m for flood-related claims in England alone since the worst of the storms began, according to NFU Mutual.

But despite the seemingly increasing regularity of extreme meteorological events, home insurance prices have been on a downward spiral for some time.

The latest version of AA’s Insurance Premium Index, published last month, reported that the combined average home and contents policy was down 8.5% on the previous year.

But following a summit at Parliament this week, Association of British Insurer’s head of property Aidan Kerr refused to rule out higher home insurance costs: "It's too early to say whether this will have an impact on premiums," he said.

However, other experts believe that the price of home insurance is artificially low, and needs to go up. Speaking to trade magazine Insurance Age earlier this month, managing director for underwriting at Axa David Williams criticised the ‘stupid rates’ that some insurers are offering. “I hope they catch a cold and recognise rates are ridiculously low,” he said.

Ben Wilson, home insurance expert at Gocompare.com, reckons that it will be a while before everyone's prices will go up significantly - even if those who have suffered at the hands of the storms will be facing another blow with more expensive renewals. “It’s unlikely that one series of events will cause an increase in premiums across the board – however, if you have made a claim on your home insurance this year, it’s likely that your premium will rise at renewal. It makes sense to shop around, basing your search on the quality of product as well as price,” he said.

Does Flood Re need a re-think?

A memorandum of understanding between the government and the insurance industry last year established plans to set up a not-for-profit fund known as Flood Re. It is intended to help deliver affordable home insurance to households in flood-risk areas and will be funded by a £10.50 across-the-board levy on everyone’s home policies.

It was hoped that this would bring to an end the disagreement between the government and the insurance industry about how people in areas prone to flooding could get insurance, following the conclusion of a prior agreement last year.

However, a chief executive of a major insurer has cast doubt on whether Flood Re will provide sufficient protection for the most vulnerable homes, including those in Somerset which have been so badly hit recently.

Bronek Masojada, chief executive of Hiscox, told trade insurance industry title Post last week: "This week’s events show that the government's proposed flood insurance scheme would leave many homeowners in a desperate situation. As things stand, one in six households, including many that are under water right now, would be excluded from access to Flood Re. That cannot be right. What made sense in the heat of negotiation just won't work in the real world.

"Flood Re is great for Britain in concept, but the government's proposals fall short in practice. An urgent rethink is needed. It is unreasonable to exclude new homes, buy-to-let properties, and higher-value properties from Flood Re protection. We absolutely support a sustainable, mutualised solution to the problem of insurance, but the government must listen to growing concern from insurers and the public."