Why the new England shirt is alienating fans 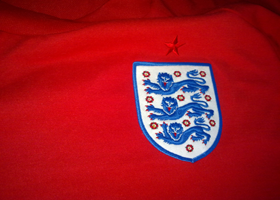 The new shirt has made England fans express themselves... Main image: The Laird of Oldham

"I don't understand how they're justifying the price. The latest cooling technology may be useful for the players, but there's no need for the average fan to pay for the latest innovation" Katie Hall, England fan

England's new shirt may have been inspired by the strip worn at the 1970 World Cup, but its price is firmly in 2014.

The new shirt, on sale for £90, has been made by Nike and is identical to the ones worn by the players at this summer's World Cup in Brazil.  And with a price like that, it's no surprise that the shirt has gotten fans, commentators and the government into a fuss.

In a statement, the Football Association said: "The FA is a not-for-profit organisation that puts £100m back into the game every year.

"It is through relationships with partners such as Nike that we are able to maintain that level of investment in football.

"The FA's policy is to avoid any involvement with how its partners/licensees set their prices, so as to avoid any risk of or implications of price fixing."

While inspired by the shirt worn by the England team at the 1970 World Cup, the shirt's enhanced "cooling technology" is what justifies its price tag according to Nike. A 'stadium' replica version of the shirt is priced at £60.

It was only last May that the previous home kit was released, and has been worn just seven times - it's no surprise that parents are miffed at the prospect of buying yet another shirt for children; versions for children between eight and 15 will cost £42. This is the second shirt produced by Nike, who took over from Umbro last year.

The Football Supporters' Federation (FSF) said, "Fans with kids often argue that strips are changed too often. The FSF would advocate manufactures incorporating a 'best before' date into the strip's label.

"Supporters buying a strip would then know exactly what they're paying for and be able to make a decision based on that."

The model of releasing one pricier shirt 'match' and another cheaper 'stadium' version is standard in the American NBA, but has taken UK supporters by surprise - it's the highest price for any England shirt. But England fans do pretty well when compared to other nations - the average price of a replica shirt for a World Cup team is £62, not far off the cost of England's.

So would the average fan pay £90 for a shirt? We canvassed England supporters for their two-penneth.

Katie Hall is a data manager from Retford - she's been following the team with her father Kevin and younger sister Abigail since the pair could hold their father's homemade flag, which he's been taking to matches since the mid-1980s. The trio are heading out to Brazil in July to follow their team's progress and will probably buy the replica version of the new strip, but Katie questions the price of loyalty.

"I don't understand how they're justifying the price. The latest cooling technology may be useful for the players, but there's no need for the average fan to pay for the latest innovation,"  said Katie.

"I want to have the tournament shirt so will probably buy the £60 version but even that's steep, especially when there's not much confidence in the team - nobody wants to wear a shirt from a bad tournament. I never wear my South Africa shirt [the team crashed out of the 2010 World Cup after a 4-1 defeat against Germany]."

Katie thinks manufacturers should be more transparent about when a new shirt is coming onto the market, so fans know when their shirt will be effectively out of date, something the FSF is championing.

"With single tickets for premiership matches now well over £60 for a top flight club, this is just another case of how the average fan is being priced out of football," said Gareth Thomas, a social media executive from Cardiff.

Nick Chen, a writer from London, says that while the shirt is "obviously too expensive at £90", he wouldn't change the simple design of white and two logos, as "anything else would look gauche."

"It's hard to tell obvious changes in new shirts unless they're especially hideous or absurd - so making a particularly weird or distinctive shirt would be worthy of a price increase. Maybe it could use some Bridget Riley additions."

"£90 is aspirational pricing. It makes people aspire to owning one," says James Chapple, a journalist from Guildford.

"The clever thing is no retailer will buy it in for even a fraction of £90 giving them absolutely massive scope for reductions.

"This is great for consumers as everyone loves owning the latest £90 England kit having bagged a 'bargain' picking it up from Sports Direct for £60. It's a shrewd move by Nike. It will sell like hot cakes once the reductions come along," said James.

Matty Currie, a marketing manager from Liverpool admires the "simple clean look" of the kit, but said "it's ludicrous to expect fans to pay that much for what is essentially a white t-shirt. The prices are a joke and I only seldom buy the latest jerseys now. In fact, I still play recreationally in my Liverpool shirt with Torres on the back - and I absolutely detest the man.

"As a child I would plead for the latest shirt to no avail, but when I finally had enough coppers I recall buying my first Liverpool top for the sum of £39.99. Exorbitant then, but paltry compared to this.

"I just hope for the sake of those who do stump up the £90 for the special edition of the shirt, get their money's worth in this summer's World Cup - usually four games, if we're very lucky!"

Go retro and save

Old England shirts are easily found on eBay and in charity shops, meaning you could save a bit of money and give to a good cause in the process. Alternatively, you could sew an England badge onto a Nike t-shirt - thrifty and almost the same as the shirts themselves...

How much would you spend to support your team or country? Tell us onFacebookandTwitter.