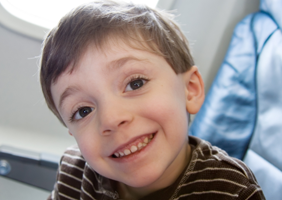 Little Eric's antics delighted everyone on the 06:00 flight from Heathrow to Los Angeles

"In the confined space of an aeroplane flying at 30,000 feet there is little room for inconsiderate behaviour," Caroline Lloyd, Gocompare.com

In terms of first-world problems, being annoyed by a bad flight is right up there (quite literally) with your local supermarket not stocking coriander, or a ‘diner-style’ restaurant neglecting to serve a burger in a brioche bun.

That said, it’s very easy to forget the small miracle of cheap, regular international travel when you’ve had someone’s little tyke relentlessly pummelling the back of your seat for the duration of a four-hour flight.

Unsurprisingly then, having a child kick or bang your seat has topped a poll of biggest flight annoyances carried out by the ever-busy survey jockeys at Gocompare.com, with a whopping 75% of the 2,000 people quizzed saying that it was a major grievance.

Other mid-air bugbears included late departures and arrivals, drunk passengers, rude staff, lousy food and – yes, them again – unruly children. Watching other people get upgrades or finding out that others paid a lot less for their flights also riles up passengers.

Gocompare.com’s resident travel expert Caroline Lloyd opined: “Anyone who has ever boarded a plane will, no doubt, recognise some, if not all, of the gripes making our top 10. There’s a fair chance that most airline passengers have been on the receiving end of a seat-banger – be it a small child or a tall passenger trying to squeeze into a seat with insufficient legroom.

“As our survey suggests, in the confined space of an aeroplane flying at 30,000 feet there is little room for inconsiderate behaviour. So, as we approach the peak summer holiday season when planes are flying full, a little in-flight etiquette will go a long way.”

Anyway, here are the top 10 biggest airborne irritations, listed in order of the percentage of people who were annoyed by them, should you be interested.