England songs: the best and worst through the years 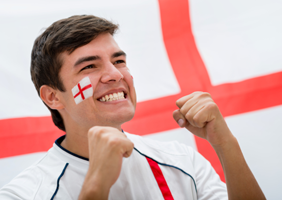 "The days of the England squad contributing to the World Cup song peaked in 1990 with John Barnes’ famous rap. But it also marked the end of players featuring on official songs"

The ‘official song’ is as synonymous with England in major international football tournaments as bad penalties, ‘laboured’ performances from Wayne Rooney and sexist newspaper articles about wags. But not this year.

This time around, the Football Association (FA) tasked Take That hitmaker Gary Barlow with recording a song for England. But it was so rubbish it was dumped, leaving the fans with no official anthem to sing doggedly from the stands.

While we’re sure they’ll manage without Gary, it really shows the sorry state that the English football anthem finds itself in.

But that wasn’t always the case. Let’s take a look at some of the best – and worst – official and unofficial offerings from through the years…

The first official England song happened in 1966 with ‘World cup Willie’, but it wasn’t until 1970 that the players started joining in.

‘Back home’ was rousingly sung by the whole England squad. But they didn’t have to wait long to get ‘back home’ as they were knocked out by old rivals West Germany in the quarter finals.

England had to wait an excruciating 12 years to get to another set of finals, and in ‘This time’ the team promised that they would get it right.

The video shows the steady progression of hairstyles in English football – from comb-overs to mullets, they all look slightly more used to the limelight than their forbearers. Kevin Keegan, who occasionally moonlighted as a top-class pop crooner, seemed especially at home in front of a mic.

The days of the England squad contributing to a tournament song peaked in 1990 with John Barnes’ famous rap. But it also marked the end of players featuring on official songs.

Just four years after ‘We’ve got the whole world at our feet’ charted at a pitiful 66, ‘World in motion’ claimed the number one spot. Along with Gazza’s tears, it went some way to changing the way the game was perceived.

By 1998, the England team were too famous, too well-paid and too in-demand to get them all into a recording studio. Thus, the halcyon days of the squad song were well and truly over.

Unofficial effort ‘Vindaloo’ was penned by Blur bassist Alex James, Keith ‘Lily’s dad’ Allen and shark-bothering artist Damien Hirst. It started its life as a parody of football chants, but it was soon adopted as an unofficial terrace anthem and reached number two in the charts.

Meanwhile, England crashed out of the tournament at the hands of Argentina; while France went on to win the competition on home soil.

Following in Keith’s footsteps, Lily Allen has actually released her own unofficial song for this tournament, but it’s not a patch on her dad’s and doesn’t really mention football…

Spice Girls feat. England United - '(How does it feel to be) On top of the world'

This collaboration between Spice Girls, Echo and the Bunnymen and Space could have only happened in the late ‘90s.

Part melancholic indie, part sugary pop, the video features the singers and members of the England team morphing from little kids to themselves – but on-screen cameos from 'Becks',  Alan Shearer and 'Wrighty' couldn’t save this song, which paled in comparison to the unofficial offerings.

Ant and/or Dec, telly’s indefatigably cheeky twosome, continued their attack on our ears and screens with this official effort for the 2002 tournament which failed to grab the public’s imagination.

An essential ingredient of any successful football song is its ‘chantability’, something all of England’s modern official offerings are severely lacking. “It’s Neville to Campbell, Campbell to Rio, Rio to Scholesy, Scholesy, Gerrard” was the only remotely catchy section of this attempt, which speaks volumes.

Embrace – 'World at your feet'

Everything went wrong with this song. Meandering, melancholic and fundamentally dross, ‘World at your feet’ was as forgettable as the performance from the England’s so-called ‘golden generation’ in 2006. The video featured terrible hair aplenty, and a lot of disturbing singing to camera.

An unofficial offering from 2010, this revamping of Tears for Fears’ ‘Shout’ could have been a triumph for Dizzee Rascal. However, he had to go and get James Corden involved, thus ruining any of the songs more endearing elements.

The best (and worst) of the rest of the world...

This year’s official song, ‘We are one (Ole ola)’ by Pitbull and Jennifer Lopez, has been criticised for featuring hardly any Portuguese. Oh, and it just isn’t very good.

There have been calls to bring back ‘Waka waka’, Shakira’s 2010 offering, but even that wasn’t as good as ‘'Wavin’ flag’ by K’naan, the official South African song of the last tournament. Vuvuzelas have been banned this year but they were a mainstay last time around, along with this rousing anthem.

Scotland’s 1978 effort did well on a number of levels – it featured a catchy chorus and simple, repetitive lyrics perfectly suited to the terraces. Despite Scotland’s dissappointing showing, comedian Cameron’s relentless marching kept the fans going.

Anastacia, the excellent wearer of colour sunglasses and crop tops, brought her unique vocal stylings to the 2002 tournament with ‘Boom’.

Warbling her way through an interminable number of verses while reaching no crescendo to speak of, Anastacia beams unsuspecting teenagers up to her spaceship like some high-tech cougar… With no mention of football whatsoever.

What are your favourite soccerball anthems? Let us know onTwitterorFacebook.