Is the Fairphone a smarter choice? 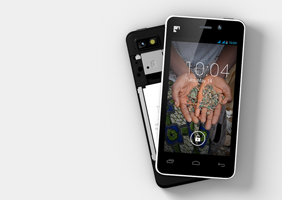 The Fairphone - a mean, green machine?

Can you remember a time before mobile phones? No? Well neither can anyone else. From the moment city boys started yelling into bricks back in the '80s, their impact on our everyday lives has been profound.

Their impact on the world has been profound too, but not always in a good way. Manufacturing your average smartphone pumps carbon into the air, pollutes water supplies, destroys habitats and displaces locals, but that’s nothing when compared to the human costs.

Tin, tungsten, gold and other minerals used to construct our phones are often mined in places which take a laissez faire attitude to safety, and manufacturers haven't always been rigorous in knowing where their materials come from.

Take Samsung. After a campaign from Friends of the Earth, the Korean firm recently had to admit that some of its tin ‘may’ have come from the Bangka Islands in Indonesia – a nasty place where, for local children, spending days in cramped, hellish conditions underground is the equivalent of a paper round.

Now at least, there is an alternative in the shape of Fairphone. This Dutch company set out with the aim of producing a sustainable, ethically sound smartphone, and at the tail end of 2012 it managed it. A crowdfunding campaign to raise finance for the first batch of phones hit its target within two weeks and, once on the market, they sold out in seconds, suggesting there is at least some demand out there for ethical gadgets.

Now a second run is available through Fairphone's website and is selling well – at the last count around 13,000 of the 35,000 run had already been sold. But the question is: how does the Fairphone compare against the other phones on the market?

Its body is made out of recycled polycarbonate, so it feels a little more flimsy than some of the top-of the-range phones with metal casings. It’s slightly bigger than an iPhone, with a 4.3-inch glass screen. Unlike an iPhone, you can remove the battery and it also has space for a dual sim, allowing you to switch between work and home phones.

The phone runs the Android Jelly Bean operating system, and has around 16GB of storage. It has room for up to 64GB additional memory through a Micro SD slot, and comes complete with an impressive 8MP camera.

However, it only runs on 3G and comes with no headphones. Fairphone is banking on the fact that you’ve probably got some of these already…

You can buy a new Fairphone now for around £250 (€310), which is more expensive than other phones of a similar spec - a Nexus 4 might cost £150. But it’s still considerably less than the top contenders from Apple and Samsung. So it’s a question of whether you’re willing to pay a little more to ensure your phone is ethically sound.

With only 35,000 new phones available, this handset isn’t going to dominate the market, but that’s not the idea. The Dutch firm set out to prove that it’s possible to create a good smartphone which minimises environmental impact and for which nobody had to suffer – and that’s exactly what it has done.