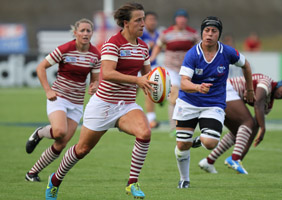 "Everything about this squad is totally professional - the organisation, the discipline - all of it except the paying of the players” head coach Gary Street

Teacher Katy Mclean will start the new term this week, armed with a shiny weapon to improve the kids’ concentration in her class.

It is a large round gold medal, slung around her neck moments after she lifted the Women’s Rugby World Cup trophy on a chilly summer evening in Paris.

Miss Mclean is a primary school teacher at the Bexhill Academy in Sunderland, although most of her five-year-olds know she is also England captain and outside-half for Darlington Mowden Park Sharks.

Still sporting the medal the morning after England had beaten Canada 21-9 in the tournament final, she said: “I’m definitely going to be wearing this on my first day back.

“We do 'talk time' with the children, where they get to share something with everybody. I’ll be able to start things off by telling them about this.”

And the story’s a good one. England had lost the three previous finals to New Zealand, but redemption came in front of 20,000 fans and was beamed around the world to 137 countries.

If this was 2003 and Katy Mclean was Martin Johnson, then she could consider giving up the day job. When Johnson lifted the men’s Rugby World Cup, he came home to £1m book deals, while Lawrence Dallaglio earned £500,000 in just a few weeks of after-dinner speaking.

But, as Joe Jackson once sang, it’s different for girls. Mclean and every member of her squad in France get paid nothing for playing rugby and either hold down full-time jobs, or give up paid work to concentrate on the sport they love.

Rochelle ‘Rocky’ Clark is a personal fitness trainer, Marlie Packer is a plumber, Sophie Hemming earns her living as a vet, while Maggie ‘the Machine’ Alphonsi is employed as a mentor manager by the Youth Sport Trust.

When the England team bus weaved its way through the Parisian traffic on the morning after their victory, a huge, irony-laced cheer erupted on board.

One of the management officials announced that things were about to change now the players were world champions. Instead of being handed a five-euro note as their daily expenses allowance during their time in France, they were going to get 10.

Despite their status as the world’s best, none of them celebrated by booking a test drive at their local Ferrari dealership. But women’s rugby is about to change and for the first time players like Katy, Rocky and Maggie have a major choice to make.

Professional rugby for women has begun and a new career path beckons for those players good enough to make the grade.

Rather like the England women’s cricket team, there is to be a small group of modestly paid, full-time female rugby players with their wages paid by the governing body of the sport, the Rugby Football Union (RFU).

A squad of 20 players last week agreed contracts with the RFU to play 'Sevens' – the shortened seven-a-side version of the game which requires players to travel the world on a calendar of global tournaments.

Besides the ability to play, train and prepare full-time, the other carrot will be the chance to play at the Rio de Janeiro Olympic Games in 2016.

After much soul-searching, Miss Mclean has made her decision. She will leave teaching at half-term in October to become a full-time pro rugby player.

“I will take my medal in and that will be great, but it will not be easy saying goodbye to the school in October," she said.

"You can’t turn down the chance to go to an Olympic Games, and it is a once-in-a-lifetime opportunity.”

Full-time, fully paid, 15-a-side professional women remain a way off until crowds, sponsorship and TV contracts are all hugely increased to make the sport sustainable.

“Everything about this squad is totally professional - the organisation, the discipline, the commitment required, the planning – all of it except the paying of the players,” insists head coach Gary Street.

“In fact, many of them have had to give up a lot of money to get to this point. Some of them quit their jobs and moved back in with their parents in order to train properly.”

Close-up, the England women certainly look every inch the consummate rugby professionals. Flanker Maggie 'the Machine' - who does a creditable version of Tracy Chapman’s Fast Car at the front of the team bus – looks like a rippling middleweight champion with shoulders and biceps that could rival men’s Lions captain Sam Warburton.

It takes effort, time and sacrifice to get into that kind of shape, never mind skills with the ball so good that former World Cup winner Jeff Probyn claimed he would rather watch the women’s game than the men’s because it relies more on skill than strength.

Injuries are common and the players wisely have insurance cover should they suffer anything serious enough to keep them off work.

Thankfully, there were no major injuries after the final, although full-back Danielle Waterman has surgical tape stretched across her cheekbone to protect a cut inflicted by an accidental boot in the chops from team-mate Emily Scarratt.

Happily, Scarratt was more accurate with her goal-kicking. She struck three penalties and a conversion and also scored the match-winning try.

England fans – both men and women – forked out a few quid to travel to Paris for the final, in a financial commitment that echoed that of the players.

Outside the Stade Jean-Bouin, groups of club players from Devon, Yorkshire and Worcestershire, draped in England flags, hugged and kissed each other’s painted faces before skipping off to the local bars.

There was one final distinction between the men’s and women’s game, a throwback to how things used to be in the male traditions of the old sport.

The victorious world champions celebrated by heading for a bar where their fans were packed in tightly, rather than any roped-off, VIP-only section of an expensive nightclub.

“When we walked in with the trophy and the fans all cheered and sang, it was just one of the most amazing experiences of my life,” said captain Mclean.

“People talked about the impact the Olympics had in terms of a turning point for women’s sport, but this win also has the potential to do that.

“There’s a huge value in having our pictures on the front of all the newspapers. Everyone has worked so hard to get to this point and it’s been a weekend I’ll never forget.”