Seven waterpark wonders of the world 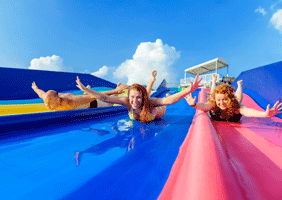 "The aptly named 'Insano' is one of the world’s highest water slides and, even to the most ardent of thrillseeker, it looks pretty formidable"

Everyone - well, nearly everyone - loves a good waterpark.

From chilled-out, lazy-river rompers, to height-hurling hedonists, a good waterpark will leave you satisfied and soaking.

So, here are seven of our favourites… ‘water’ way to have a good time!

Germany’s waterpark scene is almost as impressive as its football squad. It was a close call between including this, or Berlin’s Tropical Islands - the largest indoor waterpark in Europe.

Galaxy Erding wins as it’s part of a much larger resort, Thermenwelt Erding, which will appeal to the whole family.

It’s built around natural thermal springs with all manner of health-affirming attractions and relaxation hubs, while the waterpark itself is home to 20 thrilling slides including the Magic Eye - officially the world’s longest tube water slide.

In the true Dubai spirit, the sky’s the limit. Some slides defy gravity and whisk you uphill, while others do the opposite: step onto Jumeirah Sceirah’s trap door and cascade 35m down one of the most breathtaking slides imaginable.

Wild Wadi’s riptide surf machine is equally high-spec – in order to create the 3m-high waves, jets shoot out over seven tons of water a second! Mercifully, the epic 360m lazy river isn’t quite so forbidding. The child-friendly lagoon area also offers over 100 activities, from water cannons to racing slides.

The park is built up around one massive, fake, snow-capped hill called Mount Gushmore. It’s designed like a ski resort, with varying degrees of slopes. There are even chairlifts to ensure the ride up to the top of the slides is just as enjoyable as the attractions themselves.

The park’s prize plunge is the 36m-tall Summit Plummet which can get you to speeds of up to 60mph, while the more family friendly Teamboat Springs ride boasts the badge for world’s longest white-water raft ride. Complete with all the high-level Disney details, Blizzard Beach is a must for all fun aficionados.

Sydney’s Wet'n'Wild is one of the newest kids on the worldwide waterpark block, but it’s definitely not wet behind the ears. It boasts a whopping 40 attractions, including the loopy 360 Rush (in which you can race your fellow not-so-fainthearted friends) and the T5, where you drop 15m into total darkness.

Scared? You shouldn’t be… Wet'n'Wild’s beach is the safest in Australia – it even comes with a no-shark guarantee! Complete with Wet'n'Wild Junior for toddlers and beach safety lessons for older kids, Wet'n'Wild ticks all the right boxes. Oh, and don’t take a towel to dry… let mother nature whip off the drips on the 75m-high bungee-style Sydney SkyCoaster.

Plummeting 41m at over 70mph sounds insane, right? In the case of Fortaleza’s Beach Park it really is! The aptly named 'Insano' is one of the world’s highest water slides and, even to the most ardent of thrillseeker, it looks pretty formidable.

Other extreme wet-knuckle attractions include the writhing five-slide, free-fall raft rapids attraction Arrepius and the half-pipe-style Kalafrio. If you’re looking for something a little less death-defying, Beach Park also boasts a maze of shorter, slower slides and a wide selection of kiddie-friendly play areas and lazy rivers.

For an even more chilled-out experience, there are heaps of spa treatments, relaxing pools, massages and top-notch restaurants. From ‘H2-Woah!’ to ‘H2-Oh that’s nice!’.

A cheeky slice of Thailand in Tenerife, Siam Park is the island’s newest splash attraction.

With a sea lion island and Europe’s largest artificial surf pool, it’s already special before you even get to the slides. And what slides! Whether you fancy a vertical 25m freefall plunge on the Tower of Power, sharing a raft on the Giant (a gravity-defying two-seater) or taking a pitch-black trip into the Volcano, Siam Park will literally wet your whistle.

Make sure you complement the thrills and spills with a Thai massage in the floating far east village, a relaxing cuppa at the tea house or a slap-up spicy supper at the Thai House restaurant.

Situated an hour away from Seoul, Ocean World puts South Korea on the worldwide waterpark map.

Ocean World is great because its wildest rides are on group rafts, meaning you all scare yourself silly together. The six-seater Boomerango throws you upwards at a near 90 degrees (see the video), while the ridiculous-sounding Super-S Slide pings you all around a tunnel with hairpin corners and tummy-churning drops. Then there’s the 300m long Monster Blaster, the world’s first three-seater tube slide.