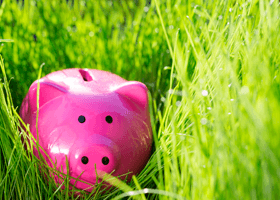 Budgeting makes us as happy as a pig in... grass

"From my own personal experience of being in debt, I found the most important thing is to admit you're in financial trouble" Ricky Willis

It's easy to fall behind where budgeting's concerned, especially in the weeks after Christmas when you're still paying for the fun and frivolity of the season.

Summer and the promise of a week by the beach is winking at you from the distance, but first you have to get through the slog that is spring.

That's why a UK debt charity is advising people to set a detailed household budget to help organise their finances.

According to a survey by StepChange, 21 million British adults don't have a household budget, while six million have a budget but don't manage to stick to it.

Making a detailed household budget is the first of seven steps the charity is suggesting as part of its Debt Awareness Week campaign, aimed at helping people regain control over their finances.

If your bank statements are being used as coasters or gathering dust in the corner, the first thing you need to do is to start opening your letters.

Make sure you prioritise essential bills like your mortgage or rent, council tax and energy bills first – the creditors shouting the loudest aren't necessarily the most important, reckons the charity.

According to the survey, 56% of people don't have a budget. Knowing where your money is going, whether it's on luxury crisps or big nights on the town, is the first step on the road to being financially aware.

Blogger Skint Dad, aka Ricky Willis, has spent the last few years sorting out his finances after realising he was in a sticky situation.

"When looking to improve your finances you first need to know where you stand. Spend some time working out what you've got coming in, what you've got going out and the total of any outstanding debt you may have," says Ricky.

"Once you have a complete picture of your finances you can then take steps to improve them."

Thinking of ways to cut back on your outgoings and maximise your incomings is an effective way of regaining control of your finances. Small steps like taking lunch to work instead of buying a sandwich can make all the difference.

StepChange clients wait over a year between beginning to worry about their debt and seeking help. Getting advice and support as soon as possible will go towards improving your position straight away.

Ricky says: "From my own personal experience of being in debt, I found the most important thing is to admit you're in financial trouble.

"If you believe there isn't an issue and sugar-coat it with excuses, you'll never get anywhere and are only putting off the inevitable more serious issues down the line."

Digging yourself deeper into debt to solve money-flow issues is only going to make things worse in the long term – StepChange is calling for the government to suggest alternatives to payday lenders.

Don't be deterred if your new regime doesn't reap benefits immediately. Getting out of debt can be a long old slog, but stick to the above steps and in a few months you should feel in better shape financially.

Chief executive of StepChange Debt Charity Mike O'Connor, said: "Many people are living on the edge of their financial means and even a small reduction in income or increase in living costs can tip them into problem debt.

"It is crucial that people do not feel scared or embarrassed by having a money problem, but instead take positive steps to bring their finances under control. Problem debt can hit any of us and seeking free confidential advice as soon as possible is the start of getting back on your feet."

Ricky said: "Debt Awareness Week is a really important campaign. Not only does it highlight a serious issue but it gives people who're in debt reassurance that they're not suffering alone. It encourages people to seek out free debt advice and gives actionable steps to get them back on track with their finances."

Last week Gocompare.com hosted a Twitter chat with Skint Dad, discussing all things money – here are a few of the best tips that were tweeted during the night. Take a look at the #GoCoMoneyTalks hashtag to find more.