JustPark and the sharing economy 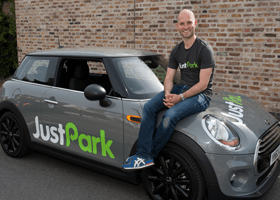 Stephany, waiting eagerly for his Mini Cooper to hatch...

In an office in leafy north London, countless screens are emblazoned with a number which is steadily rising – it sits at around £300,000 when I arrive and rises to almost £400,000 by the time I leave.

The office could belong to any start-up, with its open-plan layout and football tables, but this one belongs to car park-sharing site JustPark, and today is the first day of its crowdfunding campaign.

JustPark chief executive Alex Stephany sits engrossed behind his desk, shut off from the din by a pair of oversized headphones, but he manages to tear himself away to chat for a few minutes over lunch, which is prepared by the business's own chef.

Even on the morning of the campaign's launch he's coolly confident and explains how for JustPark it was more a case of when – not if – they would attempt to raise finance.

"For a long time we've been thinking about when we should crowdfund and we've spoken to users. A lot of them over the years have said, 'We'd love to invest in the company, how do we do that?,' remembers Alex.

"Then just over a year ago we sent out an email which basically said, 'would you be interested in crowdfunding?'. We just thought, let's see what happens and we had the most incredible response. And we thought at that moment, right, we actually have to do this. And I think we have the biggest user base of any company to have ever crowdfunded."

JustPark has over 650,000 registered users and over 150,000 parking spaces listed on the site. Car park owners register a space and earn money and JustPark charges renters a fee when they book. In February 2015, 700 bookings a day were made through JustPark.

Some JustPark users have been able to channel the money they make into social and charitable projects. One school in Twickenham has used the £2,000 it's earned from renting spaces out to sports fans to refurbish the school building. A church in St Pancras has used the money to repair its portico roof, while another in Hoxton has put the money towards food banks and projects to help vulnerable people.

"It's our belief that by allowing our customers to share our success we can ultimately build a bigger business and everyone will win," he says.

"It's a perfect fit for a company like us – we're a peer-to-peer company, we're powered by people really and now we're financed by people as well."

The sharing economy may be currently worth £9bn to the UK economy, but Alex says it's simply an ancient model rejuvenated by the power of today's technology.

"And it's actually humanising the world – for a long time it looked like the world was going to become very distant and there'd be less and less contact, we'd just shrink into little bubbles where we'd be on our smartphones and look at computer screens all day.

"These businesses are creating quite old-fashioned social experiences where people are helping other people out and doing favours for each other, in the same way that your neighbour might have swept out your chimney or done a chore for you for a shilling or two," he says.

And it seems everyone is getting in on the sharing game – in last year's Autumn Statement the chancellor announced plans to make it easier for people to share and earn cash, hailing the UK as a future world leader in the sector. Criticisms of the sharing economy have led to the creation of a new trade body to represent and champion companies, known as Sharing Economy UK (SEUK). The body will also ensure best practice and will encourage companies to sign up to a code of conduct, developing a kite mark to build consumer trust.

It seems that he's on to something – in the weeks that followed our meeting, JustPark achieved unprecedented crowdfunding success – not only did JustPark come to surpass its aim of raising £1m, just 34 days later the sum stopped rising and ended at £3.7m – the maximum amount allowed for SMEs under EU rules. The sharing economy looks set to change.

"What's interesting is how people's entire attitudes towards how they get goods and services will change. The 20th century had a very stark division between businesses and consumers, you knew what a business was and you knew what a consumer was," reckons Stephany.

"You were a consumer and you went to the cinema and lay on the beach, and a business has a big office, a secretary sitting at the front, headed paper. But actually now you have people who are working on the beach – maybe they're a freelancer, working in a peer-to-peer marketplace and they're able to earn money. Are they a business or are they a consumer? It's very hard to say. These interesting grey areas are coming to the fore."